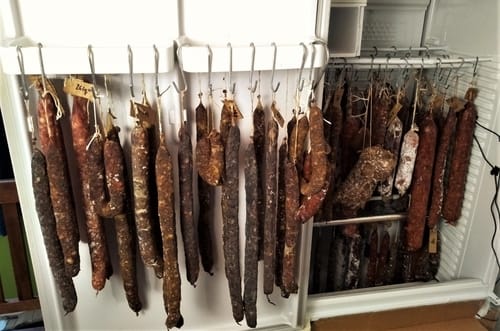 You can definitely make salami at your home! What I have noticed is that there are different styles of salami you can make at home and that sometimes get confusing.

I’ll give an overview of different salamis that you can make and the process for each style also.

Some salamis I make at home take just a day to make, some take a month or much longer. Full traditional large casing fermented dry-cured salamis could take six months or longer until they are dry enough to be ready for you – it’s all about weight loss for this style.

I have been making salami at home for decades, and it wasn’t something I tried until I had quite a bit of experience doing whole muscle dry curing.

At the start of my charcuterie journey, I did make cooked all hot smoked salami, but it wasn’t until I had a fair amount of experience I started doing dry cured traditional salami.

Salami, especially dry-cured fermented salami isn’t just a recipe, instead, it is a craft that will need your senses and interpretation of changes during the process.

Types of Salami You Can Make at Home

Hot Smoked & Cooked Salami is very similar to making a classic sausage that you would cook. You need ground or minced meat, it can vary in the coarseness.As with making sausages, salami needs a certain minimum amount of neutral pork fat so it’s not too dry when consumed. The minimum generally agreed is 20% fat, and meat say 80%.

Pork butt or pork shoulder often has around about 20% fat, and you can just buy that cut of meat and you don’t need to source specific pork back fat. You then just can cut the shoulder into cubes for mincing/grinding.

I like to grind my fat and meat separately, but it also depends on the meat. Some pork is rather soft compared to wild venison I use which needs to be carefully trimmed of sinew.

The minced meat is mixed with salt and spices. It is then stuffed into a natural or synthetic casing. These can vary from 20 mm diameter to 150 mm.

Then for a hot smoked cook salami and is often put in a smoker at a cooking temperature of 200°F or 100°C.

The idea here is that it is slightly cooked until a 145°F/65°C internal cooked pork temperature is reached.

The idea is, the fat hasn’t rendered down and still is in a solid-state to some degree.

Dry Cured Salami is often where a fermentation stage is added and the salami is not cooked, it is using salt and a higher acidity from the fermentation to protect the meat during the drying phase.

I will elaborate more on this process below, but it’s a rather involved process as well as a craft. It’s what most would consider the ‘real’ salami.

It’s not the same as baking a cake, since you are trying to create an environment inside and outside the salami to reach a level of preservation as well as an added dimension to the flavor of meat! (Although using wild sourdough yeast and high hydration dough is an art and craft too! My better half is keen on that craft!)

Can You Make Salami at Home

You can definitely make either a hot and cooked salami or dry-cured salami at home. The main tools are a grinding mincing tool for the meat and some kind of stuffing device to put the meat into a casing.

I’ll give you an idea of the environment and equipment that is needed to hopefully demystify the process below.

Fermented dry-cured salami is not something that I would advise people to jump into before having a good understanding of dry-cured meats. I often point people towards my online course first, to do at least a few projects where you can see how the process comes together.

With whole muscle dry curing, there is less chance of unwanted bacteria getting into the meat. Because you just have one big chunk of meat.

As soon as you start grinding and mincing meat you’re creating an opportunity for the unwanted bacteria. This is one of the reasons why starting off with whole muscle is better than making dry-cured salami.

Below are the main aspects of Making Salami at Home:

The curing aspect is mainly the salt that inhabits the meat and the process of binding to the meat cells and diffusion of the water activity are the key aspects of the curing process in making salami at home.

With dry-cured salami, you are curing and drying the meat at the same time in some ways. With whole muscle dry-cured meat like pancetta or prosciutto, firstly it’s cured then it’s dried. You take the salt away from the meat after it has ‘inhibited’ the meat. Also, it’s so it doesn’t get too salty.

For long-term storage like salt pork, the pork was left in the salt for a long time for preservation effects, but then it’s so salty it needs to be purged of salt before consumption generally.

Often depending on the dry-cured salami project short-term or long-term nitrates for nitrites are added these perform a role in protecting the meat from botulism.

To understand a bit more about this commonly in the United States it’s called pink curing salt I wrote a post here all about it.

Often the fermentation part of the process involves adding a starter mold culture which acidified the salami quickly or slowly depending on the type. Then drying the salami takes place which ideally needs around or above 70% humidity up to about 85% humidity and around 60°F/15°C temperature.

This is why at-home I put together DIY drying chamber, I think I have had now had five over the years. The latest addition is the out-of-the-box SteakAger Pro 40 (review soon).

But previously I have had secondhand fridges, ideally frost-free sometimes not. Then I plugged the fridge and into the controller which turns it on off to keep the temperature in the desired range.

Then have another plug-and-play controller for a humidifier and dehumidifier.

It creates a controlled environment for drying salami and whole muscle pieces of meat.

I have written a post about how I put together DIY curing chambers, you can also get sent a guide with tips and tricks on how to make your own here.

What You Need To Make Salami at Home

Of course you need the ingredients such as salt, spices, and casings. More on ingredients below, let’s go over the equipment.

If you’re making the cook hot smoked salami, you could potentially buy the minced meat however you never now how long it’s been sitting around for, and often the grind is fine, say 2-3mm, where you may want chunkier meat and fat for a hot smoked salami.

I would always advise that you want to be grinding and mincing your own meat, therefore you would want a meat grinder or meat mincer. Then you get to choose the thickness of the meat that is being midst.

Here is a write-up I did about grinders for salami and sausages.

You can get attachments for standing mixes to turn them into stuffers for sausages, a generally aren’t very good and you’re better off getting a sausage stuffer. This is due to heat and speed, which are 2 aspects of making salami that you are actually always trying to avoid.

Stuffing can be done in many ways, I wrote about stuffers at the bottom of this page.

How Do You Dry Salami at Home?

As mentioned above you can have an out-of-the-box solution like SteakAger, can put together your own DIY drying chamber or you can just hang the salami around your house in the basement or seller.

The issue is with hanging it in a cellar or basement, unless you’ve tested the environment you never know what you’re getting yourself into. Or what invisible mold cultures are around!

Traditionally you have to remember in Italy, they often would dry the salami in caves (in Umbria I know this). Once a drying chamber has been established, and you get good bacteria which is a form of penicillin growing, it ends up inoculating your whole muscle salami after a few days of the salami being in the vicinity of the good bacteria. The same happened in damp caves!

What are the Ingredients in Salami?

Sea salt in a fine form is the way to go here, coarse salt can best be put in mortar and pestle or spice/coffee grinder.

Any additives may lead to unwanted outcomes so no anti-caking or iodized salt.

Spices, so many options for your at-home salami!

Pepper and Garlic turn up a lot in salami recipes.

Nuts like macadamia and hazelnut can be found in classic dry-cured salami across France and Italy!

In some places across the world, it can be hard to get it since they need to basically stay in a freezer, if transported or shipped for multi-days it may compromise it.

You basically get fast or slow fermenting cultures. You add into a salami mix after the salt/spices, then you hang salami at a fermenting temperature for the acidification to get a kick start.

A ph meter can be used for certainty around this also.

How Long Does Salami Take to Cure?

What is the White Stuff in Salami?

The white stuff on salami is a type of penicillin that protects the salami during the drying and weight loss process.