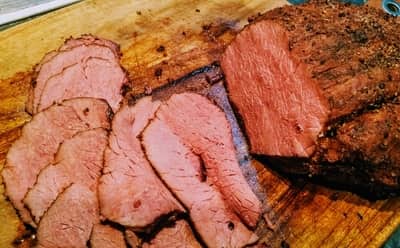 There is a whole bunch of ways that you can use pink curing salt or Prague powder (and there are a bunch of other names too for it). I want to give you a rundown on how I use pink-curing salt and some other important details about this ingredient.

Pink curing salt is in many popular foods produced at home or commercially – like pastrami, bacon, corned beef, pancetta, many hams

This website eat cured meat is all about curing meat, so over the last 15 or 20 years, I’ve been using pink curing salt as part of my recipes for salamis, pancetta, braesola, and many other cured meat projects.

There have been some improvements in how pink curing salt has been calculated. I’ll go over with you how it’s used for large-volume projects or small-at-home curing or charcuterie projects also.

There is a link at the top of each page, or you can find that pink curing salt and equilibrium curing calculator here.

What is Pink Curing Salt?

Pink curing salt is either no.1 or no.2.

There is a color change that’s used with pink curing salt, the meat does take on a red/pinkish hue, which is a reaction happening inside the myoglobins in the meat. You’ll notice most commercially produce cured meats like hams or bacon have this pinkish kind of reddish color.

When I have not used nitrites or nitrates in my homemade cured meats, you can notice that the meat stays a more neutral color.

How to Use Pink Curing Salt?

Most of the pink curing salt packages that I’ve seen have indicated a commercial quantity and ratio of use.

Pink curing salt is generally written as 4 ounces should be used for 100 pounds of meat.

The way I work out my meat curing is to decide on the amount of saltiness using the modern equilibrium curing, so let’s say 3% salt for making braesola.

Since the majority of pink curing salt is ‘salt’ with the nitrate/nitrites.

Here is a table to highlight the different amounts, whether it is No.1 or No.2 the amounts is the same:

There are 2 methods of using pink curing salt for meat curing, either a brine or a dry cure. Above the table is dry curing.

A brine is a water/salt type of curing sometimes known as pickling or wet brining.

A ratio of 1 teaspoon per 5 pounds of meat is the guide for brining. But then one has to work out the brine the salt amount.

My preference is using a ‘equilibrium’ brining, I came up with the calculator for this as well.

For Equilibrium Curing at home, 0.25% of the meat weight, means accurate scales are very important in measurement – here is a page of scales I can recommend.

Why to Use Pink Curing Salt?

When curing meat, canning, brining – its protection from unwanted bacteria, using pink curing salt in the correct ratio can avoid bacteria such as botulism.

Taste and color are also factors, a grey-looking ham doesn’t have the same appeal!

Effects of Nitrates and Nitrites

Here is a list of pink curing salt that have same ratio of salt, nitrates & nitrites.

Here are curing salts with different ratios of nitrates/nitrites – this is due to European Meat Curing standards (many of these have 0.6% of nitrite in the salt vs. 6.25% for curing salt #1) – therefore my calculator is not applicable).

There are Other brands like Tender Quick, I have not used or had experience with these, so I won’t comment here.

TenderQuick – These all have different amounts of sugar, nitrites, and nitrates depending on the product. They have similarities to pink curing salt but it is best to just follow what instructions are stated on the packaging. These products are popular in Canada.

Salumi, a meat curing book’s by Ruhlman and Paulson’s summarizes curing salts like this,

Nitrates and nitrates are naturally occurring chemicals that our bodies rely on. Green vegetables such as spinach and celery are loaded with them. As much as 95% of the nitrates in our bodies comes from vegetables. Our bodies naturally convert nitrates into nitrites which work as a powerful antibacterial agent, particularly and an acidic environment (such as our stomachs).

Nitrates and nitrites provide same antibacterial function and the sausage it’s been cured. Lactobacillus bacteria, feeding on sugars in the sausage, produce acid(that is the tanginess we associate with salami) and the nitrates keep harmful microbes from growing – most importantly, the bacterium that generates the deadly botulism.”

Pink curing salt is used at very minimal levels when I am doing a few pounds of dry-cured meats. A very small percentage of 1 teaspoon is used as part of the ingredients.

Pink curing salts is something that should be doubled or even triple checked to make sure you have the right amount.

In contrast, pink curing salts when used properly, and in the right ratios add a level of protection to the curing project in my opinion – this is why I use them.

From the textbook Home Production of Quality Meats and Sausages it states,

Carcinogens can only be formed when products are heated above 266°F or 130°C. This can only happen when cured bacon is fried or cured salamis I grilled. The majority of cured meats never reach such high temperatures.

What If the Wrong Amount of Pink Curing is Used

When I have equilibrium cured pieces of meat with the right amount of salt and 0.25% curing salt. Once this meat has been vacuum packed you can put it into the fridge, depending on the size I would normally leave it for 2 to 4 weeks.

However, on the occasion, I forgot about it, and even after three or four months, the meat has been sitting in an oxygen-low environment cured and ready for the next step. Removing it and hanging it in my homemade DIY curing chamber.

Link to USDA Guide on Curing