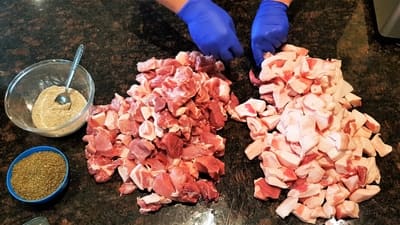 The big assumption is that all fat is the same – but it is not quite like that.

When making sausages it’s either the fresh sausage, smoked/cooked (hot smoked) sausage or a type of dry-cured salami sausage; I love making all of them, that is why I started this website eatcuredmeat.

I want to elaborate on the best techniques I’ve discovered over the years to make my sausage with fat.

All pork fat is not the same, because it depends what part of the pig it comes from.

Important factors are also how hard the fat is and what melting point it has.

My resources for back-fat to make sausages or salami are a commercial bacon company and also a good local butcher.

About 15 years ago, when I started sausage making, I could get pork fat for free from any butcher. The challenge nowadays is, because many butchers don’t cut up animals anymore – they are retailers sometimes.

Their meats/sausages arrive in boxes already processed at a central meat works and it will then just displayed and sold.

I was super lucky to come across a pig’s head for sale the other day. To take the jowl off was quite straightforward. First I wanted to use it for sausages, but I decided to make a dry-cured Guanciale (Italian cured meat) from each one, they say it’s like pancetta but different.

It was quite a firm piece of pork and my first one I’ve extracted from a pig’s head. It was interesting to see the texture and the inter-connective fat that was embedded into the meat.

It was actually similar to the marbled fat of a Boston pork cut from the upper shoulder (it depends, of course, on the age of the pig).

As you can imagine, this part of the animal’s head gets a lot of muscle movement from chewing. So, this meat was incredibly firm compared to all the other cuts of pork I use.

Shoulder or Boston butt carries marbling fat throughout the meat rather than white fat and meat separated (if you get a whole shoulder you do get bands of this as well). That is why it’s popular for low & slow bbq smoking/cooking because the embedded fat will melt and moisten the meat when it’s cooked in the butt.

When making sausages you can see the meat or fat you’ll be grinding, and whether it has more or less fat than the meat – to figure out your ratio (more on this below).

I am not talking about the different types of fresh sausages, that are emulsified or processed for a more generic texture such as hot dog or baloney.

Pork belly can still work for making sausages – it’s only an issue if you don’t keep it at or near freezing point temperature.

If you’re just learning about sausages, this is definitely one of the key points to remember: Always have your meat and fat at near freezing point.

With the mechanical process of mincing or grinding meat, the movement will create heat, and the heat can smear/mix the meat and fat together, which is not ideal when making sausages.

Unless your target is an emulsified, more generic consistency.

That’s is why we use sometimes a large 1 (hp) horsepower meat grinder. We place the attachment and auger in the freezer, so when the grinding starts, everything is kept a little bit cooler. Can do this also with the 1/2 hp grinder below.

What is the Best Fat to Meat Ratio for Sausage

20% minimum fat to meat ratio is required for making most types of sausage. The maximum allowed fat in certain commerical sausages is 50%. 25-30% is ideal for many sausage recipes.

If you don’t have enough fat in sausages, it’s a waste of all the effort. The dryness makes the whole sausage nearly inedible.

Trust me I’ve been there and done that – this is not a nice outcome.

Recently I tried to reproduce the 700-year-old Bavarian Nuremberg bratwurst sausage, which you can enjoy in restaurants and also as street food around Nuremberg, Germany.

Looking through many recipes for this, I decided on 40% of pork fat. This is a very delicious sausage which literally melts in your mouth! (LOTS of marjoram, white pepper, allspice)

I’ve also found it’s quite hard to judge pork belly in terms of the fat to meat ratio. It just depends on how fatty the pig is and what age. Often older pigs = more fat!

Generally speaking 20 to 25% would be a rough guide for the ratio of fat to meat for pork belly.

What Cuts of Meat for Sausage

Shoulder, front leg, back leg, belly or even the jowl or cheek of pork.

To be honest, the pig head had not much meat, apart from the jowl cheek. The jowl is on the outside of the cheek. Just for information and just in case, you want to cook the tongue – it tastes a bit like liver!

Key tips I’ve learned over the years for making sausages.

The first tip is: Taking time to remove the sinew is really important for having a good finished product. The worst thing is, when you find bits of connective tissue in the sausage.

Any lymph nodes or non-meat bits should be removed. Blood doesn’t help either and spoils faster than meat. Take your time and remove it, as best as you can.

The second big tip is: Always do a test pattie after you have done your grinding and adding salt and spices.

If you’ve done your binding right by mixing it together then it should be tacky and sticky.

Another tip: If you make patties and squish it onto your palm, and hold your hand upside down, does it fall off? If it does, the meat and fat need more binding, so you have to work it more or let the dough hook do it.

I’ve read on meat science textbooks, that the myosin is then released in the meat which creates this desirable ‘tackiness’.

As I said earlier fry-up a little meat patty – try it and you will know what the finished product would be like.

Another tip – Be extra careful deboning, I’ve left a cartilage chunk in the meat when deboning a leg of venison. Oh dear, the chunks were spread across 80 pounds / 40 kg of sausage!

Venison, Beef and many other types of meat can be incorporated, as long as they have that 25% fat (in some recipes where the meats are more emulsified, olive oil or rapeseed oil is being added to the meat without the fat).

Always keep in mind for a non-emulsified fresh sausage you still want 25% fat to meat ratio to make it work.

I often use very lean wild meat like venison for my sausages which has to have the added fat.

Beef, chicken and lamb fat can be used for making sausage – although, these meats have a different taste that isn’t neutral like pork fat.

Beef fat is often yellow in color, so it can change the whole look of these sausages without dabbling into the other additives. Sometimes it’s more white, maybe depends on grain or grass fed.

It has a certain flavor that definitely is far from neutral, compared to pork fat.

It’s still completely enjoyable, it depends on your personal preferences.

Chicken sausages made with chicken thighs have lot of the fat incorporated into the meat, often blends inter muscular. That’s also why, if you fry thighs its very hard to overcook them!

I’ve eaten chicken sausages but I haven’t made them, so I can’t tell about this one.

Definitely has a taste of its own, and again it’s far from neutral. First, you have to like the fat flavor. The flavor of lamb sausages also depends on the age of the animal and whether being fed on the milk of the mother only. Older sheep’s meat/fat (mutton) for sausages has a very distinctive flavor and needs LOTS of garlic and rosemary for a kind of ‘funky’ flavor (in my mum’s opinion / it’s a classic combo).

Grind or Cutting Fat for Sausage

It completely depends whether you’re making salami or a fresh sausage and on the sizes of your grinding plates.

For a smaller 25 or 28mm sausage, a maximum of 4-6 mm when you are grinding, would be appropriate.

This is important for the type of sausage you want to make. Cubing the fat is another option for a more visual aspect.