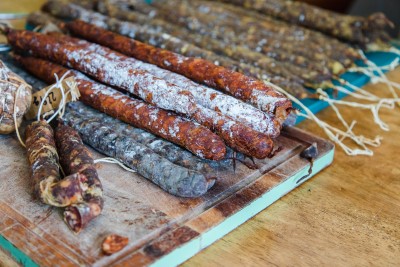 When it comes to mincing meat for salami and sausages there are some subtleties and mincer/grinder designs that I think you want in your equipment.

Over the years I used many different types of meat mincers – from the cheap ones to more expensive ones, through to commercial equipment.

Often guys who come to this blog eat cured meat are asking what makes a good mincer for making sausages or salami.

First I’ll list three great mincers below and will explain why I suggest them.

Kitchener do solid meat grinders, this is what I would deem ‘residential’ and would suit most households for years.

“A lot of mincers and grinders talk about capacity per hour – it’s never going to apply. Since, when it gets warm/hot you stop and have a break and cool the meat in you’re fridge/freezer”

What Makes a Good Mincer for Salami & Sausages?

When you are processing meat, you don’t want a mincer that is light – it has to stand firmly on your benchtop or things get messy.

A heavy mincer doesn’t slip around and you can get on with the job of cleanly cutting and mincing your meat like all of the above models – the smallest weighs over 10lb/5kg.

I prefer to have feet on the bottom rather than mincers with a form of suction, these tend to fail with the amount of moisture or chunks of meat that may be on your benchtop when your processing.

Generally, stainless steel is a type of metal that will last longer than carbon steel, in terms of the blades.

Speeds – having a slow/fast option helps a lot. You won’t get the smearing at a lower speed. Also, many cheap ones don’t have a reverse speed for unclogging or cleaning or slow speed.

Most meat mincers on the market for residential or for home use will have barely a 1/4 horsepower and not enough true output, this means the engine or motor has to work very hard against all the resistance of the thick chunks of meat proteins.

A lot of online models focus on the ‘wattage’ – so it’s like 2,000W output. It’s often just a marketing number not really relevant to consistent performance.

If you want effective cutting or chopping from a mincer, my suggestion is to look at a minimum of 1/2 HP for decent mincing workloads.

Metal Gearing inside the motor is by far better than some cheap plastic cogs on the market and of course a copper motor. Pay under $100 for a mincer and you tend to not have these design aspects.

If you only use your mincer occasionally to make patties, for example, sure, you could get away with something basic like the AICOK above.

When making your own salami or fresh sausages you don’t want to use meat mushed together. We call that ‘mystery meat’ as you never know what’s inside like, for example, in a saveloy.

I understand, if you want to make an ’emulsion’ style sausage. But I am generally talking about having a clean separation between the meat and fat whether it’s a fresh sausage or salami.

Or at least that has the ability to do this.

If you get a good meat mincer – as I have suggested on this page and talked about across this blog – you invest in a mincer that has decent sharp blades and makes hundreds of kilos of meat go through these machines without the need to sharpen.

When you notice dulling of the blades it is best to buy replacement blades.

If you buy a mincer from a reputable brand you’ll have no problems sourcing these blades.

There is a big difference between a meat mincer or grinder that has plastic rather than solid metal parts.

In the warmer months when I’m making sausages I like to put that auger (it is like a corkscrew) of the mincer in the freezer for half an hour before any mincing commences.

A lot of the heat that is produced from the motor and the moving parts means augers are the first bits that heat up in the mincer.

The auger and the blades are other things that you can potentially freeze for a little bit before your mince-making.

However, you need to have sturdy metal components to do this, plastic parts will just shatter. Some mincers have caps over the blades and plates that are plastic – that’s a no-no for me.

To make mince for sausages I use a 6 mm blade for many variations. For mincing chicken, fish, or pigeon (pigeon breast makes a good South East Asian Larb) – for these you want to have different sized blades (maybe finer ones).

5-6mm works for most meats for me.

I don’t think a sausage stuffing device is all that useful. You always need the right tool for the job. It can work, but I haven’t had much success, using a manual stuffer with a crank is my preference.

A variety of types of blades is the way to go in my opinion.

Basics of Salami or Fresh Sausages

Emulsion happens when you can’t determine the meat, like baloney for instance. An incredibly cheap form of Italian mortadella, an emulsified sausage containing pistachios.

For most sausage- or salami making the mincing should not turn into emulsified meat balls. It is pretty obvious when the mince shows a pinkish color as it blends together.

Ok back on track….

You actually grind the meat several times to get the emulsified effect for certain types of specialty German sausages such as ‘Weiss Wurst’ (a pale sausage which is cooked in water and eaten at 4 am in the ‘German Beer Hall’ for sustenance after partying (it’s a tradition in Munich – that’s what my mum told me). This is way before Octoberfest got popular…

The goal of mincing for salami is to get coarsely minced meat.

Another example of an emulsified sausage would be a ‘Frankfurter’. Most Frankfurter recipes will involve putting the meat through a grinder three times and using like a 5 mm plate and then a 3 mm plate.

For decent sausages or salamis, you have to get the binding right. This is called forcemeat or farce.

For this, you want to release certain types of myosin in the proteins of the meat so that the meat gets a little bit tacky and sticky. For me and many guys, it is a lot of fun working the meat with sticky hands until you get this binding effect.

Emulsion and binding is similar but still different.

A true emulsion is a colloidal suspension of two immiscible liquids (i.e. two liquids which are not soluble in each other, as in the case of oil and water). Typically, a non-polar liquid is dispersed within a polar liquid. A third component, an emulsifying agent is required for the development of a stable emulsion. The emulsifying agent acts at the interface between the fat and water to prevent coalescence of the fat (i.e. to prevent fat pockets or caps). Good examples of oil-in-water emulsion are mayonnaise and milk.

The old classic way of knowing when that bind has reached the right level for dry-cured salami is to make a little pattie with your hand.

If it sticks, it’s ready!

Clean cutting of the meat has a lot to do with the sharpness of the blades and the power of the motor.

So, do not get lazy when trimming the sinew of the meat.

I’ve definitely noticed the horsepower of the motor can make it easier. But it works best with most or all of the sinew of the meat that is carefully cut off (takes time for wild meat but is worth the effort).

I mentioned this before having the blades and auger in the freezer for half an hour helps.

If you’re making sausages or salami you should note that working at a temperature just above freezing point is ideal and also a health and safety aspect.

This is one reason why I am careful about teaching people the aspects of chopping and mincing meat because you are exposed to the environment and this may lead to undesirable outcomes.

I urge you to follow hygienic and food safety principles.

The Single Use / Throw-away Equipment Culture

A friend likes to say the above and I think it applies also to meat mincing and grinding – like many other things in life.

Investing more will mean it lasts years, decades, and not just months.

For instance, at ‘Amazon’ you will find maybe 100 cheap meat mincers.

If you’re only going to use this a few times a year and doing small batches then this type of meat mincer will be fine, get the one below.

I suppose the reason why you’re reading this is that you want to make decent amounts of salamis and sausages and want your machine to run longer.

Then you are going to need a mincer to do the job properly, like the others above.

Design Aspects that You Do Not Want

I would preferably chop meat into mince with a knife rather than smearing my meat.

I want to highlight elements for meat mincers and grinders that you do not want.

Grinders and minces dominate the market and, of course, they come at a cheap and cheerful price.

I do not recommend purchasing anything like this for doing decent batches of any type of sausage. Expect broken bits of metal and plastics in your sausages.

There are certain brands like KitchenAid which have attachments for mincing, again they fall into this category and I would avoid them.

Difference Between a Meat Grinder and Meat Mincer?

In my opinion, there is no difference, they are both using blades to grind or chop the meat up.

Use a Manual Not Electric for Stuffing

Heat – causes an issue when you’re using an electric stuffer or mincers. You might end up getting emulsion and binding.

Ideally a manual sausage-stuffer, vertical or horizontal, is in my opinion this is the way to go.

It’s actually a lot of fun with the crank handle when one person on one end and another person on the other end communicates and applies the casing for a horizontal stuffer.

Both ends of the stuffer are managed and controlled based on the feeling and resistance that is happening.

I wrote some more about sausage stuffers here.