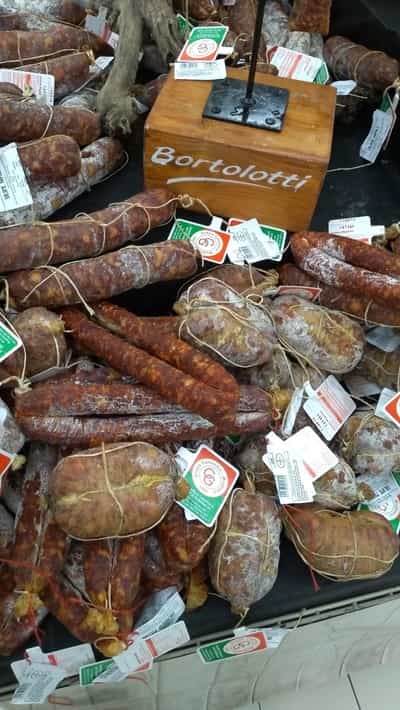 It can serve as a delicious treat, but why is salami not refrigerated – it’s meat isn’t it?! There is a little bit more to it, since some salami can be salt preserved and dried rather then cooked.

I’ve made both at home, and on this site are all the tails of salami and charcuterie adventure! Well kinda.

After reading books on salami and meat science, these questions seem to get asked a lot so here is the short and long answer.

Salami is a centuries-old style of meat that continues to rise in modern popularity, especially with the increase in charcuterie boards popping up on menus across the world. But, this dry-cured meat is different from many other types of meat as its refrigeration requirements vary.

Why is Salami not Refrigerated? Salami often does not require refrigeration if uncut a left whole. Tools used to preserve the salami may include starter cultures to increase acidity, cold smoking, salt inhibition and nitrates to minimize unwanted bacteria. Commerical salami often has fast applies acidity increases to preserve also.

Once the casing of the salami has been broken, as in when you cut into the salami, several of these protective factors are no longer in place, though. Since the casing can act as a barrier to harmful bacteria, you will need to closely monitor your storage processes and consumption dates.

Still, dry-cured whole salami can be left unrefrigerated for up to 6 weeks, but cut salami will need to be refrigerated due to exposure to oxygen which speeds deterioration and drying.

Refrigeration of your salami is generally done to prevent the spread of harmful bacteria as well as to preserve the meat.

Of course, meat can still go bad, so it is important to watch out for signs of this.

Either way, there are a few differences between the storage and refrigeration needs of dry-cured salami compared with cooked salami (including mortadella emulsified styles).

Dry-cured salami is traditionally cured with a mixture of salt, spices, and natural or commercially added nitrate sources.

Once the seal/casing of the salami is broken into (as in when you slice a piece off), then the protective barrier will no longer function in the same way.

This is precisely when unwanted bacteria can begin to enter into the meat’s realm and cause spoilage.Before the dry-cured salami is cut into, though, it can last for months without going bad. Especially if it is left to “breathe” with butcher’s paper wrapping it instead of being entirely opened or closed off in a storage container.

What you really want to pay attention to with dry-cured salami is when it is exposed to oxygen.

This is what will allow the permeation of harmful bacteria and discoloration of the meat. So, if you are not planning on eating the salami for weeks to come, then be sure to only cut open the link that you plan to consume.

When the salami is cooked (or hot smoked), this, in essence, gets rid of the effects of curation on the meat. The casing will have been fringed, and the meat will have withstood high temperatures that should get rid of any harmful associated bacteria.

In this case, the meat should be treated just like any other meat when it comes to refrigeration. Though the cooked salami would have likely been prepared in the same way as traditionally cured salami, this cooking process will strip the salami of its enhanced curation effects.

Thus, the meat will need to be refrigerated (though it will likely be able to withstand a few hours outside of the fridge while you are serving it- comparable with other meats).

You will, of course, be able to serve this to your guests without having to worry about refrigeration during your gathering, but you should store what is leftover in the fridge.

The curation process for dry-cured salami acts to preserve it for a prolonged period. This is why this protein source has become a backpacker’s dream- it is able to be carried for a lengthy time without requiring refrigeration to prevent it from spoiling.

Being dry-cured is not an overly complicated process to understand, but it is a precisely formulated process that continues to be perfected by artisans all over the world.

Dry-curing meat must be done thoroughly in order to assume that the meat is preserved and safe to consume.

The preservation takes place, mainly, with the salt that is used to cure it. When the salt (and other spices) are added to the meat, its flavor is enhanced, but it is cured and preserved to last much longer than it otherwise would.

The salt creates an inhospitable environment for the meat. This restricts the environment in which harmful bacteria can grow, so the meat is able to flourish for much longer.

Additionally, nitrates are added through natural or artificial sources that act to preserve the meat as well. These allow the cured meat to sit on the store’s shelf as well as your own for a much longer period than traditional meat is able to. Cold smoking also can provide anti-bacterial and anti-fungal properties.

What do curing, salt, mold cultures, and nitrates have in common? These four components act to enable dry-cured meat to last (when not exposed to oxygen) unrefrigerated on your shelf.

This is what gives the dry-cured salami its place on a modern charcuterie board.

Of course, when applied in the case of salami, the curation and preservation process allows you to leave the pork-based dish in a cool environment without the need for refrigeration or alternative storage procedures.

Be mindful, though, that this applies to whole salami and not cut salami, as the cut to salami will break its casing and allow harmful bacteria to enter when it otherwise could not.

So how do these four relate to one another, exactly? Let’s take a closer look:

Is the process by which salt and other spices are added to the meat (in this case, salami) to inhibit and reduce unwanted bacteria and prolong the life of the meat. Salt acts as an agent

Thus, the meat is protected from otherwise harmful bacteria that would cause it to be unsafe to eat. Most dry-cured meats can be consumed without being cooked, but be sure to pay attention to recommendations for the specific meat you are planning to consume. Prosciutto Parma ham for instance has 2 ingredients quality pork and salt (& 12 months of curing/drying).

If left out, the water activity (aw – we are getting technical now) would still remain in the meat, and harmful bacteria would grow leaving meat unsafe to consume without being properly stored and cooked.

Often cause confusion for their place in meat, but rest assured that they are safe and promote the healthy process of aging with dry-cured meat. The strains of mold cultures that are permitted in salami help to fight other harmful bacteria from being able to penetrate the meat through increasing the acidic environment

They can most often be seen in white or blue/green cultures, but they should not have a strong or foul ammoniated odor. If you notice that your salami is beginning to wreak of a foul odor, be sure to check if it is safe to consume before you choose to do so.

Can be present in the salt and even other natural components like celery and are used to help in the preservation process of the meat. When used in the curation process, the nitrates will reduce to nitrites during fermentation.