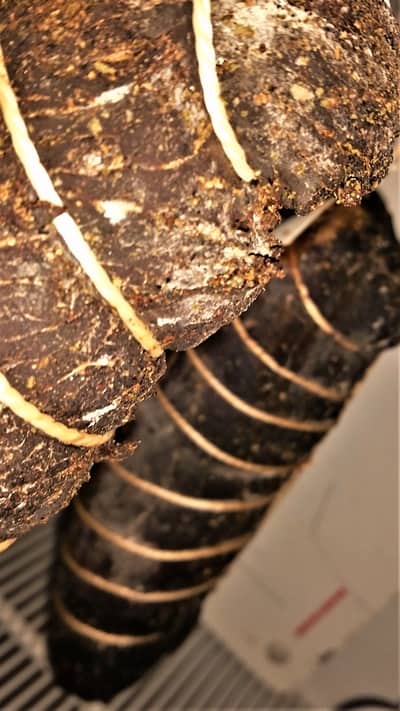 When I first started curing wild game meat, I based my ideas on the techniques used for lean, dry curing and Italian recipes. The results were fantastic! At the end of the day, meat is meat, and wild meat is generally just leaner. Curing the meat allows a whole other level of appreciation from what you harvest in the wild.

Over the years I have used different types of wild deer, goat, turkey, duck, boar trout and salmon for cured meat projects.

Curing has a wide definition so I just want to give some ideas of various ways I cure my harvested wild meat.

How to Cure Wild Game Meat

To cure wild game meat a dry cure salt or wet salt brine is used. Depending on the type of meat and cut being used. How the game meat is cured will depend on what cut and kind of meat are being used. The main methods of curing meat are hot or cold smoking and drying the meat.

These are the ways I have had great success with:

Its the same as farmed meat, but generally has leaner meat. It all depends on what the wild game has been eating. This also means as you know, wild game can vary in flavor greatly!

Breakdown of Each Option for Curing Game Meat

Dry Curing is using salt to preserve the meat, once 35% weight loss has been obtained, the meat can be consumed. It’s dried meat like jerky or biltong but using Italian craft skills for a more refined product. Here are some smaller chunks from my DIY Curing Chamber.

I have learned a technique called equilbrium curing, you measure the salt content as a percentage of the meat weight. By doing this, you can get precision curing, and choose the salt level.

When I harvest larger red meat wild game, after splitting up the prime steak cuts, roasting cuts and the curry/casseroles/curry pieces. I have a selection of options.

The hind leg prime muscles offer a lot of options. Once all the sinew is cleaned up (unless you are freezing the muscle, then the sinew can help protect in the meat when frozen).

Dry curing that I do, can be done, in a cellar, normal fridge or a DIY curing chamber.

When doing it in a normal fridge, you need slice up the major muscles to about 1/2 pound / 200 grams, so the meat can dry nicely. Since a normal fridge runs at about 30-50% humidity it’s not perfect for dry-curing but close enough for smaller cuts. This is the setup I use:

If you want more info on dry curing in a normal fridge, I wrote a whole guide on it here.

But many years ago when I started getting into curing meats, I found it brought out a whole new appreciation for the process/experience/journey of hunting wild game.

If you want to learn more about Do it Yourself curing chamber’s, please find a link here.

I use the equilibrium curing method, which is curing by a percentage of salt in to the weight of the meat you are curing. It means you get an accurate saltiness and you can choose how much salt you prefer based on your taste.

The Italians created a delicious dry cured beef recipe using the eye of round from the cow. This kind of meat is extremely lean and solid meat, which made me think it would be similar to a lot of the wild red meat that I harvest.

I have used this style for many different cuts and shapes sometimes chopping up the whole muscle more, especially for quicker meat session in my regular kitchen fridge.

Curing with a wet brine, I found best since it helps retain the moisture in the bird. A wild turkey is something I love to hot smoke. For the younger turkey’s I find they can be roasted out reasonably well, the turkeys I harvest roam around near maize farms, so they are packed full of corn-fed fat.

For the larger turkeys, I’ll break them down, and take the breasts which are a decent size and wet brine these – this is for 6 turkey breasts / 2 Liters of brine.

It’s harder for the flavors to penetrate using instead of salt-dry curing. But the just helps with and the subtle flavors seems to come through also.

I generally will use a portable smoker because it’s easy and simple hand the Turkey breasts will be nicely smoked with 20 to 30 minutes at a moderate temperature.

For longer smoking sessions, which helps get more smoke flavor in. Sometimes I will use a kettle grill, doing the indirect heat snake method. If there is more low & slow smoking to be done, I will use the electric smoker.

So I have refined my jerky/biltong recipes which I love to prepare before a big hunting trip also. This is a kind of the ultimate hunting snack, I use the South African style biltong the base classic recipe is salt, malt vinegar, and toasted coriander.

I like to add smoked paprika, chilli, and sometimes a few juniper berries (classic pairing with red game meat).

For biltong & your are drying it out and taking so much moisture that it’s way beyond the 35% you need for stabilizing it and making it okay to eat, like for dry curing meat.

I have done biltong and jerky in oven or a dehydrator. But once I got my DIY curing chamber I like to slow down the drying process and do it over through two or three days.

The South Africans like a dry or wet style, which means that you have a little bit of moisture in the meat and it’s not fully dried. This is easier to achieve when you can control the humidity and temperature.

I do know a guy who owns a commercial biltong company, and basically curing and drying the meat in massive drying machines. It takes him about 2-3 days, but he does the South African style.

Other Cured Meats for Wild Game

I have had some success using wild pork for making . Had some advice from a Dutch butcher and actually ended up using his cold smoker and he used very dark strong types of wood.

Because the boar the wild pig is lean, it’s kind of like more a ham I found it never had enough fat to be a ‘bacon’ Unless you can see an obese wild pig, you never know. It’s pretty hard for a pig to get obese living in the wild, just like humans I guess.

There are generally two types of salami the cooked salami which is what many butchers I have come across do. Then there is dry cured salami, which involves fermenting then drying the meat with maybe some smoking also.

Dry curing salami is an involved process with quite a few steps, would definitely put this in the advanced meat curing category. Hey, but its just a process so you just need the right guidance.

Recently I did a salami which was wild meat blended venison and pork fat you have to add the farmed pork fat as well to get the fat content up I have found. My friend and I spent a weekend processing 30kg/66 pounds of meat for one-third sausage and the rest a few dry-cured salami recipes.

A Kielbasa Eastern European sweet paprika salami and a Spicy Venison salami – used 2% and 3% salt to the weight of the meat. Using a higher percentage for the stronger chili spiced salami worked out really well.

Mini salamis can be really awesome as a protein snack if you harvest of meat. I have even come across some butchers that will do the work for you. I prefer to do my own of course.

Salt p or beef I’ve been reading about recently, they were used extensively as rations and military campaigns around the world wars.

So if you’re looking for long-term preservation of meat and this would be the way it was also used before refrigeration was standard across the Western world. The preference though was to you pork belly, so you had a decent level of fat & meat.

I have ‘salt cured’ venison and wild pork with the same method, using leaner cuts. You can then use the meat later on without freezing it (I just keep it wrapped in the kitchen fridge).

The basic method is really to use the saturation of method and completely take out as much moisture as possible from the meat. Which means the bacteria can’t thrive and then you just need to find cool areas to store the meat. If you want some more info on salt pork, I wrote a full post here.

Can you Eat Deer Meat Right After you Kill it?

Yes, but it will be tough. The offal parts of the animal are best suited to immediate consumption. The liver and heart are favorable organs to consume after killing a deer. Major muscle groups are best aged for 7-10 days in a suitable environment

What is the Difference between Curing Game Meat & Farmed Meat?

Game meat is generally leaner, wet brining is an effective way of holding moisture in the meat, if hot smoking is planned. Dry curing wild game, is works effectively, since the meat dries faster due to less fat on the meat.