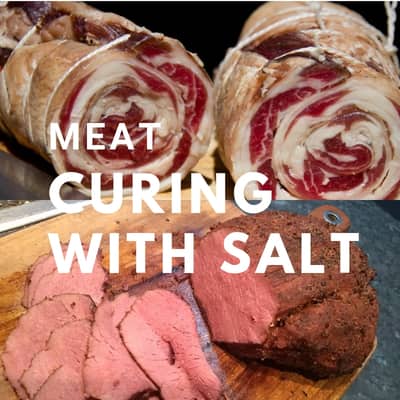 There is salt and there is curing salt, I hope to help explain which salt for which application in this post.

Advanced salumi dry curing should have pink curing salt with sodium nitrite & nitrate (because of the nitrates which breakdown to nitrites over time, for long over 30-day curing/drying).

Sea Salt – sodium chloride has the preserving effect for cold smoking or dry curing (for inhibiting the meat and reducing the moisture – whic in turn lessens the ability for the bad bacteria to spoil the meat). But nitrates are added as an extra level of safety when curing meat for any length of time, I like this extra level of protection. Even though I am like to use quality meat, mostly wild or farmed in the right way and handled with care along the way ie. kept cool and hygienically handled.

For short term meat curing, less than 30 days, that will be cooked ie. dry-cured bacon, pastrami, and corned beef.

Dry-cured meat are generally not fermented (unless its dry-cured salami, where fermentation is used to change the acidity before drying, not a must – but a more consistent way to make salami).

The main reason why the curing salts (1 & 2) are pink in color is so that the curing salts and are not to be confused with regular table salt or sugar. Eating curing salts straight without being mixed and diluted, could create health problems.

Easy and cheap, pink salt makes the meat curing process safer. Basically, through history, there were different types of alternative ‘nitrates’ used such as naturally occurring saltpeter for instance.

All recipes I have seen use:

Meat curing where the meat is fully cooked or fully hot smoked before eating.

Here are a couple of links to the No. 1’s on Amazon I use ones that have a minimal amount of artificial flavors and propylene glycol which make the curing salt perishable, like these ones. Most labels will indicate about 10 years shelf life with the below options.

No. 2 I use for long term dry-cured projects such as Braesola or Coppa, dry-cured hard salami and meat projects that are in curing chamber for months (or years). I have wanted to do a 4-year dry-cured Prosciutto, one day! 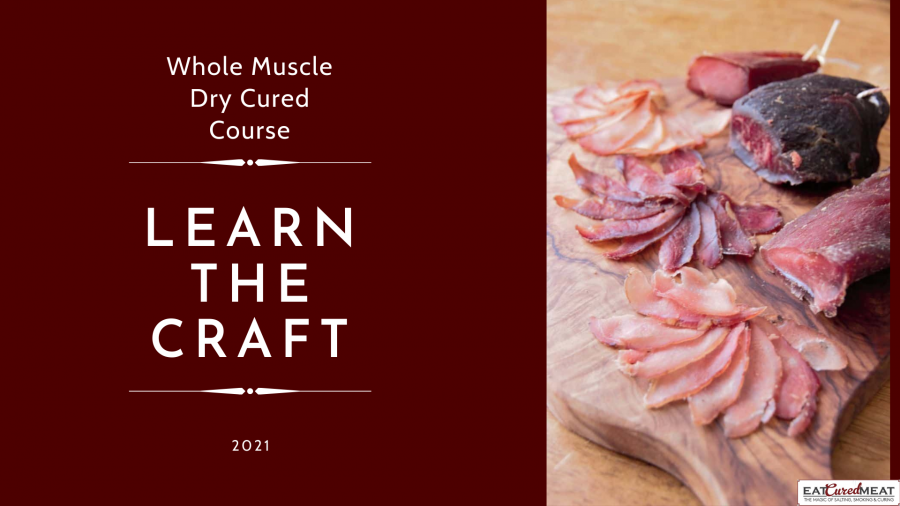 40% off my Online Charcuterie Course for a limited time.

It's been super popular & if you want convenient lifetime access to my meat curing course, find out more here 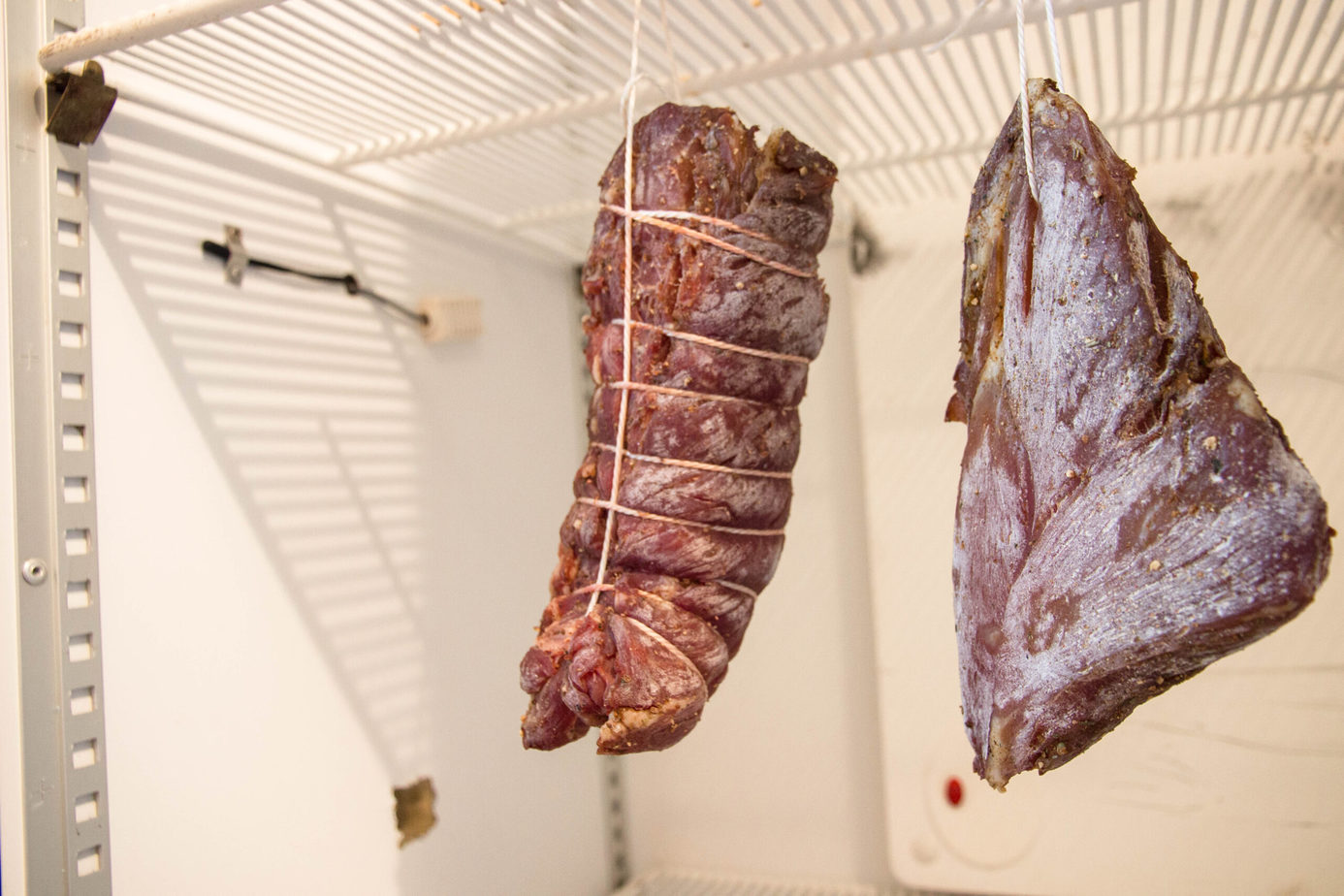 No.2 has long term nitrate added so that it keeps meat safe over a more extended period,

From what I have read in books, in the 1970’s there were some pretty loose regulations around nitrate additives. This has all been tidied up across the western world and the regulations have been put in place to minimize the use of it commercially now. 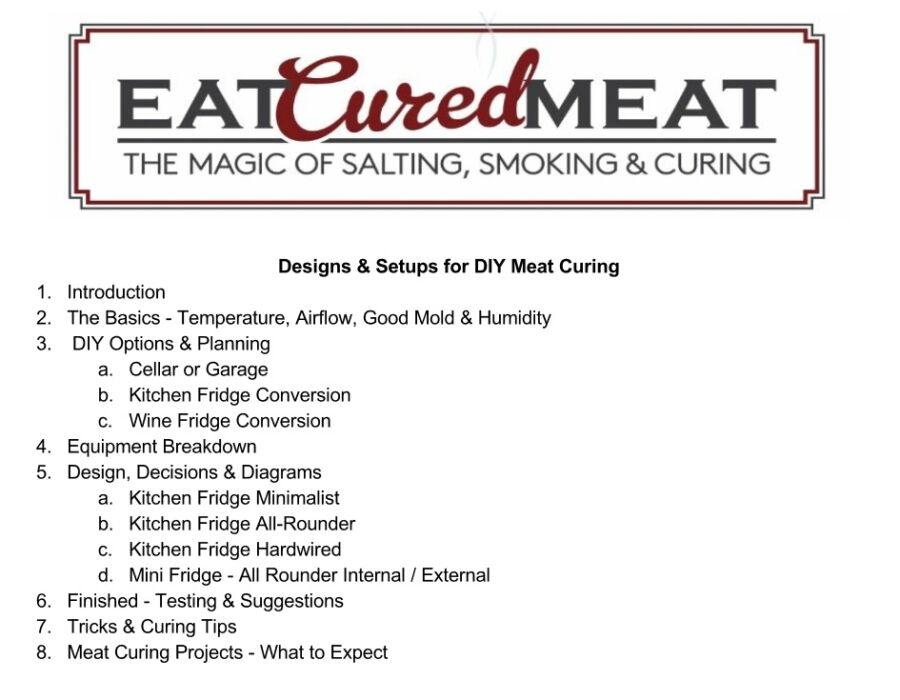 Your subscription could not be saved. Please try again.
Your Email Worked! 🙂

Some certain cured meats projects do not need pink curing salt/nitrates, like gravlax.

So do nitrates cause health issies? It seems to come up in misinformed websites quite often, here are some scientific answers:

The ‘processed foods’ get bundled together in the mis-informed or poorly researched media.

A highly process incredibly cheap hot dogs or poor quality deli ham is likely to contain a higher level of nitrates then what the home curer uses = ie 0.25% of the meat weight.

In the mid-1970s there was all this talk about nitrates/nitrites. The National Toxicology Program, an agency within the U.S. Department of Health and Human Services. A multi-year evaluation of the safety of sodium nitrite was completed. They concluded at approved levels, nitrite is safe and also may help counter heart attacks, vascular problems, and sickle cell disease.

So this is applicable for ‘cooked’ until crispy cured meat, generally, I’m doing dry-cured meat, where the Italian Scientists has studied it, and believe it is even a more easily digestible protein (due to the strict production, Parma Ham does not have nitrates, just Pork, and Salt).

Yes they are, there are instances like the famous Parma Ham above, which has been so fine-tuned only salt and pork as used.

It does not have an expiry date. Oxygen will attract microbes, as long as it’s airtight and in a cool area it will have multiple years of use. Small amount of discoloration may occur over time as oxygen effects it.

Invented in Prague, Czech Republic, Prague Powder #1 is sodium chloride (salt) and sodium nitrite is for meat that will be cooked. Prague powder #2 has the addition of sodium nitrate, it is used for long term cured meats, that will not be cooked.