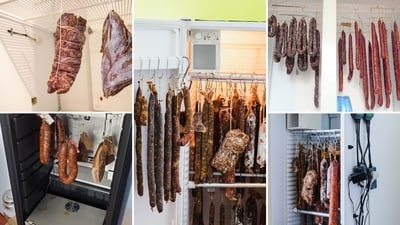 I’ve seen many different designs for meat curing chambers, from Prosciutto Parma Ham factories in Italy through to many home curing chamber DIY conversions, 5 so far.

The design factors that are used are all very similar and you can replicate these things at your home or buy an ‘out of the box‘ solution as well.

Since charcuterie and meat curing is all done with some craft and a sprinkling of science, it is very probable that any non-commercial design will need a little bit of tweaking, and testing to get the right conditions.

But really it’s all about promoting an environment that grows good bacteria to prevent the meat from spoiling. Secondly, to have a cool temperature and a high enough humidity so that the meat doesn’t dry too fast on the outside, before drying on the inside.

Oh yes, and then there is airflow and exchanging fresh air.

To design a meat curing chamber you need to balance temperature (50-60°F/10-15°C), Humidity (70-80%), and Airflow. Humidifiers, Dehumidifiers, Domestic/Commerical Fridges, Fans, and Controllers are needed to reach the desired conditions.

Design of a Meat Curing Chamber

I could actually give you a list of things, I was making in a very large double-door fridge I converted, not just for dry curing/fermenting cured meat.

Also, I used it for:

Of course, there was a thorough cleaning and sterilizing before/after these various projects.

So let’s go over the factors that are most important.

Depending on the stage of making cured meats the moisture may need to be 90% or down to 60%.

From what I’ve learned, there is a step in prosciutto commercial dry meat curing, which happens after the salt cure is added – equalizing.

Which is to make the salt uniform throughout the meat. This is done nearly at a regular fridge temperature, but with high 90% humidity.

For the home cure, this isn’t really as important, and you can set a 70 to 75% humidity and achieve most salumi projects or dry-cured meats. If you use an equilibrium curing or brining technique, it’s also due to large 30lb/15kg pieces of pork leg.

Controlling the humidity to keep within a range is somewhat important, and saying this, meat curing has been done in the natural environment very often over the ages.

When I was getting a personal tour of a Parma Prosciutto factory owner (https://www.slega.it/), Mr Borchini said after three months of a controlled environment for the Parma ham pork legs.

Including the equalizing phase.

The Windows were either open or close depending on whether was raining or not, and the natural breeze from the Po River nearby was really the moisture source.

As you can imagine there would have been some large variations – I will note, that the skin on the pork leg protects the leg from drying too fast.

Using natural or synthetics casings can mimic this partially, but pork skin is thick!

I have found with meat that I have cured sitting at the temperature to keep around 50°F or 10°C has always been targeted if you want slightly less mold growth, the white good mold I hope!

This is one of the DIY designs I have in my pdf curing chamber design book you can check out.

With second-hand fridges I have used, I’ve tried frost-free and older non-frost-free. It’s been easier to design a fridge with a frost-free fridge, because it cycles a lower average humidity. Therefore, you can sometimes get away with just a humidifier with a controller to turn it off and on.

Out of the 5 fridges I’ve designed, all have needed both a humidifier and dehumidifier, however.

Enough airflow to exchange what is in the chamber is important. I’ve known folks who just open the fridge door every day, but I was looking for slightly more hands-off designs.

The air does not need to be fresh all the time, but this is something that needs to be cycled on-off.

Fixed or variable fans on timers or attached to controllers can also be used to achieve this. Often I’ve found 10-15 minutes a day can be enough. However, it also depends on how full the fridge is with high moisture cured meat!

I have often let the natural mold develop, which is often present already on the meat, but it can a little hit and miss. Sometimes I’ve had to wipe any unwanted molds off with white vinegar to get things started.

There are also starter cultures that can innoculate the chamber/cured meat to create a uniforming blooming starter mold. This type of mold regulates the drying more effectively since it holds a bit of moisture on the outside.

Once established, good bacteria can thrive in these conditions. When you’re cured meat enters the curing chamber it can quite quickly uptake the good molds.

Inoculation of penicillin good molts can be applied in a spray form to meet that is placed in the curing chamber..

Good penicillin mold is described as powdery white, it can start off slightly speckled. Well-developed good mold can also have colonies of green on top, above is a place in Calabria, Italy showing this growth on Pancetta and other product produce its called Livasi.

The most common way for home curers to create the environment they need is still converting a fridge. Depending on location, some people do end up having a favorable area around the time that may have the right temperature and humidity for several months of the year.

20 to 40% humidity is quite common with most compressor fridges.

A temperature and humidity control is needed to sense the conditions inside the fridge. Then the controllers turn on/off a humidifier as well as the compressor for the fridge.

Sometimes the inbuilt fan is enough to circulate air, but it depends on the design of the fridge and there are a lot of variations between fridges, but generally, a hole will be needed- with a filter/fan installed for extraction, possible inflow too.

Making holes in fridges has its challenges, cooling pipes are often embedded through the foam-filled insulation. I’ve hit a pipe once, due to the cost of the fridge – I ended it getting it picked up for metal scrap.

I’ve been reviewing a small format dry-aging and dry curing fridge from SteakAger, see the bottom of the page for a link to more info.

Small fridges can also provide the same conditions, but being tight spaces. Smaller equipment needs to be used such as humidifiers or sometimes dehumidifiers as well.

But the same outcomes can be achieved by using a compressor fridge.

If the fridge piping/coolant plate is exposed to the back of the fridge this can sometimes lead to an easier conversion IF there aren’t any pipes going through the side walls.

There are thermoelectric coolers and compressor coolers. Some compressor coolers have a secular system where the evaporated condensed water is then heated and the humidity is pumped back into the wine chamber.

This may potentially be a suitable system for converting into a meat curing chamber, however, I have not tested it so cannot comment on it.

Some compresses have a natural dehumidifier in effect which can be beneficial when designing a meat curing chamber as mentioned – frost-free generally.

Commercial compresses would be used. An assessment would need to be done in terms of the moisture that may be created from the calling compressor system.

The challenge is always how airflow/temperature changes the moisture – so the balance needed to be reached.

To be honest, a temp swing of 10% or humidity swing of 10% – has never caused any issues with my meat-curing fridge designs.

‘Out of Box’ Solution – SteakAger Pro 40

Set and Forget for Dry Aging or with a Humidifier Accessory, they sell – Dry curing too. A 15% range in humidity has left things a little drier than I would like.

But as I write this, it’s 65% less cost than the $3k dry curing small format fridges.

But the old trick is to vac pack the cured meat once it has hit your target weight loss (30-45%). Then leave it for 1-2 months for your normal kitchen fridge to equalize.

Works very well, and I use it often. It’s also how I store finished dry-cured meats for 1-2 years!

Here is a link to the DIY gear I’ve put together on another page.

Here is a long post I wrote about building a curing chamber.

Here is a link to Charcuterie in a SteakAger Pro 40, since this is around $1,300 vs the $3,000 for other competitors. It comes with all the app/simple functionality to make the drying area you need for charcuterie – check it out here.

I also wrote about dry curing small bits of meat in a regular kitchen fridge.