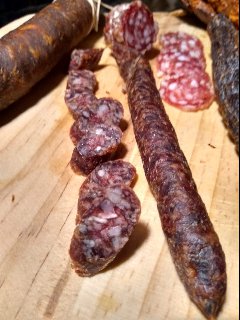 Over the years I’ve done a lot of meat curing using sodium nitrate and sodium nitrite. Another name for these is pink curing salt. A question that comes up a lot around here, is whether you need to use them to make cured meats.

Curing meat also has a wide meaning, whether it’s dry cured or smoked/cooked (hot smoking). So it’s dependent on what the meat curing project is as well.

I must have bought I first pink curing salt like 15 years ago, and boy it does last a long time. Although, these days for certain project I tend to use it less.

My general answer in summary to this question would be.

Not Using Pink Curing Salt to cure meat is an option. Generally speaking, it is used to lessen the risk of Botulism, and add a pink color. The application is a personal choice, the other factors of meat curing need to be strictly adhered to if pink curing salt is not used.

There are a few other names that pink curing salt is called:

There are many other names around the global meat curing community, which I have been a part of for some time!

The majority of meat curing I do is at home using some form of nitrate or nitrite @ 0.25% equilibrium cure.

It’s pretty much a must for any commercial producer of cured meats, and also for other types of processed meats due to many regulations across the Western World.

These regulation help the risk management perspective for commercial products.

Botulism is the reason why. You find more about Botulism on this below.

I do not use pink curing salt often for whole muscle meat curing and for making my dry-cured bacon. But I’ve also had nearly 2 decades of experience.

This is based on the research that pink curing salt has the potential when cooked at high heat over 350°F or 180°C to turn into nitrosamines and could form carcinogens. Carcinogens are associated with the risk of cancer.

So, when I want something to be crispy or cooked over 180°C/350 F, it will be without pink curing salt.

My main concern is adding nitrites and nitrates to cured meats and cooking it over 350°F/180°C as mentioned.

So, I do not add them to my dry cured cold smoked bacon, since I like my bacon crispy!

If I’m cooking Italian with dry-cured pancetta which is pork belly that’s been dry salt-cured and then dried out to either be eaten or cooked with. Spaghetti Carbonara is traditionally made with pancetta which is fried, so I don’t use pink curing salts.

I’ve been making a type of Hungarian dry-cured salami which is cold smoked for three sessions over three days.

It’s an odd product because it has just enough salt in it to be cured. It is fried up like a fresh sausage (around the 1.8-2% total salt equilibrium cured).

Traditionally this is a cold-smoked salami/sausage that is cooked, and because of this, I don’t use pink curing salt. These are sheep casing diameter-type salamis so they only take 4 to 6 weeks to dry out (they are thin).

For long-term dry-cured salami that takes 3 to 6 months to make, I have been using pink curing salt no. 2 for experiments with and without it. I feel my technique is refined enough now to not have any risk issues around botulism with this.

What Does Pink Curing Salt Do to the Meat?

Main reason why pink curing salt is used, it inhibits and reduces the chance of botulism.

It also tends to produce a pinkish color to the meat that is cooked or smoked. This is why the dry-cured smoked bacon you buy in supermarkets is always pink, and without the presence of sodium nitrite, it would possibly be greyish.

Grey is not a marketable color for meat, like, for example, grey deli ham! (Note! Some salts carry some form of natural nitrate, they could create the pink color, too.)

Can’t say this is true – but some believe pink curing salt creates more of the porky flavor.

The Definition of Curing & How it Relates

Curing is using salt for water binding and diffusion – whether this is done using a dry salt curing mix or a wet brine curing mix.

Pink curing salt is generally 90% salt, and the remaining amount of no. 1 or no. 2 is sodium nitrate and sodium nitrite. If you want to read more about these different types of pink curing salts here is a link I wrote.

What are Nitrates or Nitrites?

A quick summary about it…

Pink curing salt no. 1 is generally used for under 30 days meat curing projects. It only contains sodium nitrite and salt.

Pink curing salt no. 2 is used for over 30 days meat curing, most commonly whole muscle dry-cured long-term projects and dry-cured salami. This will take 2 months up to 8 months or years to develop (5 years for Jamon/ Iberian Ham!)

No. 2 has nitrates and nitrites and I believe that within a few months the nitrates breakdown into nitrites.

Where Are Nitrates Naturally Found?

80% of the nitrates we consume as humans are from vegetables. 5% in Europe is from cured meats. They do quite a lot of cured meats too!

Supposedly we have nitrates occurring naturally in our bodies and in the soil.

It’s the heat and reaction that seems to create issues, but of course moderation is important too.

Dry Curing or Wet Curing and then Cooking and Smoking

On my blog (eatcuredmeat.com) I categorize cured meat as hot smoking, that’s a simple cure for meat I plan to smoke/cook – like fish, I catch.

For wild turkey meat or pastrami I directly cook and smoke at a temperature of around 200°F or 100°C.

Warm smoked products are another category that many are not familiar with. In Europe the meat is smoked in winter temperature around 0°C or 30°F.

What sometimes doesn’t get taken into account is the meat been salt-cured or wet brine-cured? At these temperatures, this will have a large impact on inhibiting or slowing bacterial growth, depending on the amount of salt.

Dry Curing Only without Cooking

My method is to dry cure meat just with salt and spices to create some of the Italian classics or Spanish styles.

This is a personal preference where people may cure meat without pink curing salt – or cure bacon and hot smoke it to a safe meat internal temperature.

Then they often freeze it up and cook it again to make it crispy. This is an area where it’s better without nitrites.

Here is how each one happened:

Looking back at 2017-2014 the statistics of the centers for Disease Control and Prevention show there are 100 to 200 botulism cases per year botulism cases in the United States. But if you read through the descriptions, Canning comes up the odd time for food-born botulism.

You will notice that it’s mainly issues around traditional indigenous preparation of seal meat that takes most of the statistics for food-borne botulism.

Dried fish came up once when I read back through some years, but I don’t know if this is related to adding any salt, dry curing and brining.

The key is always moderation, I know most of us like the convenient food of processed goodness from the deli. It’s a pity that so much food across the Western world is full of additives, preservatives, and, of course, nitrites.

Moderating the intake is one aspect. In my opinion, It is obvious there is no passion or care instilled for making cheap convenient food, but it’s part of feeding the masses!