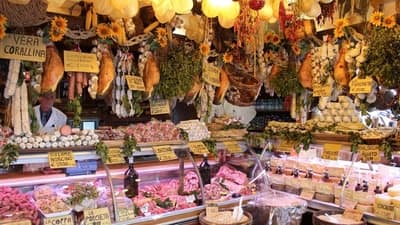 Charcuterie, in the modern sense, hasn’t got much to do with raw meat although sometimes it can look quite raw, it’s probably dried actually. As much as we love to put everything in a box. There is a lot of variation in the world of charcuterie nowadays. So it’s going to take some explaining, but I will also try and summarize it as well before going in-depth about what I know and have researched.

There is now mainly a traditional and modern interpretation of charcuterie so I will high what is cooked, raw, or dried (actually none is eaten raw).

The quick answer is no charcuterie is raw apart from fresh sausages but they are cooked before being eaten anyway. But also many different charcuterie products are not cooked either. So what are they?

The quick answer is some are dried after salt curing, but it gets a little bit more complicated as you explore the world of dry-cured meats, charcuterie, salumi, salami and Garde Manger. I will give a definition and some examples of each below to highlight what is cooked or dried).

When I started looking at cured smoked meats 15 years ago I was harvesting fish, seafood, and meat from the wild. And figuring out ways of preserving or flavoring it. Mainly through hot smoking or drying out to make biltong or jerky.

Hot smoking fish and making some jerky and biltong were the first attempts, nowadays I love producing dry-cured salami and salumi and all of the above, hence this web site.

There are so many variations in charcuterie now, I will attempt to clarify all the different meanings and explain why none of them are raw.

Traditional fresh sausages are raw, but cooked when eaten of course – so they are not intended to be served raw.

Not all charcuterie is preserved, some things like pates are more about using all the parts of an animal. Some of which are neglected for some reason ie. heart or liver. There are so many variations and examples, recently I helped locals prepared 3 pigs in Slovakia for a charity event.

So what you have is all sorts of preserving techniques that are used to slow down the bacteria that spoil meat. Bacteria require water, oxygen, and food. Preserving is used in charcuterie to deprive the bacteria of one or more of these needs. Vinegar / Acidity (think a jar of pickles or gherkins are also another technique)

Dried or cooked, you won’t see any raw things below, but I will highlight why they aren’t raw as well.

The French interpretation includes some aspects of dry-cured salami ( Saucisson sec for example) – but many of the aspects of mousseline, terrines, pates (forcemeat more on this below), confit (cooked in fat and stored in fat), fresh sausages or offal based products.

The French have come up with many offal and organs to produce delicious aspects of charcuterie.

This one gets a special mention,

Andouillette  – This definitely is one of the more extreme aspects of classic French charcuterie in a fresh offal sausage.

Charcuterie in the modern context has been used as a marketing tool for many restaurants (using the word to sound fancy I think) and has really influenced the idea of dry-cured meats, whilst the Italian broad category for charcuterie is salumi which includes dry-cured salami. (I wrote here about the difference between salami and salumi)

Confused? Hopefully not. Let me try and explain all these bits and pieces today so you can get your head around it.

The site is all about cured meat and smoked meat, which nowadays modern interpretation includes mainly these two categories.

‘Cured’ meat is confused by a certain government labeling, since cured means, it has had some form of preservative added to it. For what I make at home predominately it’s just salt and spices for products like pancetta or bresaola.

Meat curing in my humble interpretation is using salt to remove some moisture which has the effect of intensifying the flavor but also preserving it – used before refrigeration and it the classic ‘dry cured’ meat approach.

Just remember with this mention of dry curing or meat curing – it’s not just a recipe. It’s a little bit of science, some crafting, environmental balancing and it is wise to get properly clued up.

For a beginner, check out this post I wrote on some easier projects.

In layman’s terms, you can use salt to draw out some moisture creating an environment inside the meat that is inhospitable to bad bacteria allowing the meat to dry out to the point where it is preserved.

Often the thin slicing is needed, so the salt used to cure the meat is not overpowering. A little salumi goes a long way and should be savored in my opinion.

Before going over the different classifications that for charcuterie and a bit of an introduction as to why they are different (and giving each a cooked or dried label).

Other Forms of Preparation for Charcuterie

Cold Smoking holds certain antibacterial & antifungal properties that we used to ward off pesky insects and provide some helpful aspects to preservation. In essence, Cold smoking is just another form of drying meat with smoke used as an ingredient.

The mighty pig is also not the only type of modern dry-cured charcuterie, bottarga – is a type of salt-cured fish roe eggs.

Link to a great intro to Bottarga @ Great Italian Chefs

Now in terms of classification it has been salted to preserve it and intensify flavor, turning it into an alternative to grated Parmigiano-Reggiano for pasta or many other dishes. But it has many different interpretations across many different countries and cultures (wiki link).

So I would put bottarga in the charcuterie basket category as well.

Forcemeat is basically an emulsion (blended paste texture) of fat and meat when it has been ground up and meat turns into a type of paste.

The easiest example of this would be mortadella which is a giant emulsified and cooked sausage. Cut wafer-thin and normally encrusted with pistachios in traditional Italian Bologna style.

Forcemeat comes in many different varieties depending on the culture and it’s all been melded together these days anyway.

Mousseline forcemeat has the lightest texture. Made with heavy cream rather than pork fat, it’s typically forced through a sieve to produce a very fine consistency. Mousseline is used to make delicate sausages that are poached au torchon and is great for filling pastas.

Emulsified forcemeat is also very smooth and is used to make products like bologna, mortadella and frankfurters. Lean, boneless meat and fat are ground together until smooth and emulsified into a soft cake-like batter where flavor and water are added so it can be molded. It’s then filled into casings, like deli meat chubs or frank links, and hot-smoked or cooked.

Fresh Sausages start with a coarser blend of ground meat, fat, water, salt and seasonings. The meat and fat are ground together and worked by hand or in a mixer with seasonings, salt and ice water to help bind water to the proteins. This mix can be made into patties or filled into casings to make rope and link sausages. All types of sausage can be cooked-to-order.

Country-style forcemeat has an even coarser texture and traditionally includes pork liver along with a garnish of nuts or vegetables. It usually uses a binder called a panada, such as cubes of bread soaked in egg and milk. This technique is used to make terrines and pâtés.

Gratin forcemeat is similar to a straight forcemeat with the exception that the primary meat is seared to develop flavor and color before cooling and grinding it. Some forcemeat is made from completely cooked meats and the gelatinous broth it creates – dishes like head cheese and trotter cakes are good examples.

Forcemeat Provides a Fresh Take on Charcuterie from pork.org

The reason I stuck this in above, is that you will notice all these types of charcuterie forcemeat are not raw but cooked in some way.

Cooking at a high or low temperature is basically what hot smoking or low and slow smoking is. For the huge fan base, although no preserving is happening, charcuterie and smoking with cooking get very close to overlapping in my opinion.

The beauty of charcuterie for me is it is slowing down food again. Food is getting way to fast these days – the neverending goal of convenient fast food makes less and less in touch with where it comes from and how it’s treated.