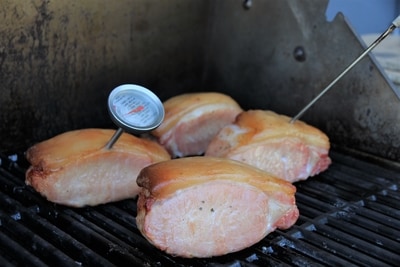 The classic question that gets asked a lot is how to avoid the ham being too salty, because, after all that effort of brine curing or wet brining the ham you want the result to be perfect. Buying a big chunk of ham or using a precious piece from a pig you’ve reared – it’s a beautiful thing!

Then it should not be too salty to be enjoyed.

This blog eatcuredmeat.com is all about making and eating cured meat, and over the years I’ve written a ton about how to brine, also called pickling, ham.

There are many different kinds of ham and it may get confusing but using this method, below, you are guaranteed to not get an overly salty ham.

Using an equilibrium wet brine or pickle between 1-2% salt concentration will not allow the ham to get too much salt inhibiting it. A brine injector needle will make sure the cure in the ham is properly dispersed.

Specifically, this is for when you are cooking the ham, with or without smoke. Only for a dried ham that is preserved and focused on weight loss, you would need a much higher salt concentration.

We are talking mainly about wet brined and pressed not dry curing which is drying without cooking (which a lot of this site is about though!).

The equilibrium brine calculation is a percentage of salt to the total weight of the meat plus the water.

I know that does sound a bit complicated so I created an equilibrium curing calculator, this tool is used to work out how much salt to use.

Then the question is, how long to leave it in the brine. I would always advise getting a meat injection syringe. An injector means you are going to force that brine into the meat, otherwise you have to wait for some time for the brine to penetrate.

And it only just affects the very outside of the meat.

Guide to The Perfect Salt Cured Ham: To get that perfect salt-cured ham, there is one trick I have found that works a treat. Well, actually, let’s talk about two tricks.

Making Ham That’s Not Too Salty

I will go into some detail about:

It’s the key, because you end up choosing the level of saltiness, but at the same time, you can perform a light cure on the ham.

Equilibrium wet brining takes time, about one week per 1 inch thickness of meat (most porky hams are 3-10 inches I guess).

What we achieve here is the right amount of salt to season the meat, and also allowing the salt to bind to the meat muscles inside.

Therefore, the water-binding holds the moisture in, so you have a much more juicy moist ham as an end-product. It really is about holding the moisture on the surface, so when it cooks, it won’t dry out on the outside.

This is especially important if you’re using a cut of pork with a bone in it. By using a meat syringe, you are going to allow the salt to bind throughout the meat as you put dozens of holes in.

But I also use it with boneless hams.

Water-binding will occur so that the moisture in the meat is ‘held’ in by the salt.

Most meat like pork is made up of around 60-70% water (like our bodies actually). The outcome of the water binding is a juicy/moist cooked ham!

After injecting your pork with equilibrium wet curing and a week in the fridge, you’re ready for the next step, which is forming the pellicle before smoking (if you are smoking, or just cook it in the oven).

If you’re not smoking and indirectly cooking the meat at the same time, then you don’t have to worry about the pellicle, it just means that the smoked vapor around the meat when it’s cooking adheres to the meat better = meaning more smoking flavor.

If you want to read about pellicle formation I wrote all about it here.

Why Wet Brining Ham is Better Then Dry Curing

As mentioned above, meat is 70% water and generally 20% protein.

Dry curing ham with a 1% equilibrium cure will mean the salt is drawn into the meat, and be held near the surface.

It won’t go deep like using a meat injection syringe, though for extra juiciness. But it does hold some moisture on the surface of the meat whilst cooking.

Why is Ham too Salty

Saturation brining is about time in the cure, the ‘degree’ of the brine represents the higher levels of salt diluted in it.

I thought I would touch on this since it’s the most common form of ‘brining’ meat. In essence, it’s placing meat in a salt water solution for a set amount of time.

Here is a link to a table highlighting some of the commercial wet brine (saturation) levels, this is not the target area of the topic but I thought I would put it in here for anyone who is interested.

The oBé (oBaumé) scale was devised to correlate to the percentage concentration (% w/w) of a brine solution (salt in water).

Using this traditional method of brining, you end up guessing the amount of salt penetration happening because there are other factors at hand.

I’ve done sea fish for 12 minutes in an 80-degree brine, the fillets were only about 1/2 inch thick. It took about 40 minutes to dilute a rather large amount of salt!

As you can imagine all of these factors will vary the result, and if you just look at the piece of pork that you’re using there will be variations each time. Hence buy Equilibrium Curing and Brining is the winner!

Why is Sugar Added to a Ham

I used to think sugar had some preserving effect a few decades ago when I started my meat curing adventure.

Sugar actually doesn’t have any preservation effect on the meat. It’s commonly used in brine recipes. I use it quite often to add a little bit more flavor.

Just like apples or pineapple, sugar is a natural companion to pork and enhances the flavor. I find sometimes people go a little overboard with the amount of sugar they put into ham or bacon but that’s just my personal opinion. Often in terms of equilibrium brine percentage, I would use a maximum of 0.5% sweetness such as sugar in most of my curing/brining.

Why Cure a Ham with Salt

The main benefit when cooking/smoking ham is to get that salt brine to hold in the moisture.

I do this by brining wild turkey (that I hunt ) which really needs that moisture.

Without fat to render down and create a more juicy type of meat – brining is an excellent way of keeping things juicy for lean game meat.

The key again if you’re cooking or hot smoking until it’s cooked is to have a level of salt penetration that holds the moisture during the cooking process.

Should I Soak a Ham Before Cooking?

If ham is too salt, soaking in tap water for 30-60 minutes may get rid of some of the salt from the meat.

Then cut a piece off and fry it up to test the salt level. I’ve also done this with salmon after I have traditionally salt-cured it (not equilibrium cured/brined) to make something like gravlax, although salmon being thinner meat that’s not as dense, the salt leaches out faster.