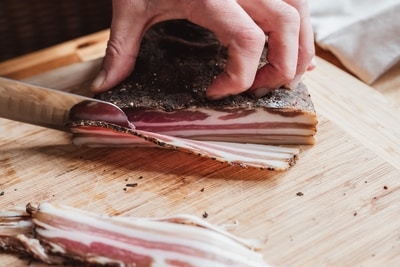 In the food world, pancetta and salt pork are two popular options for those who want cured meat. If you’re new to this world, you might wonder what sets these two types of meat apart. After all, they can seem similar.

I’ve been making both pancetta and salt pork for different culinary treats over the years, but still often it get

Difference between salt pork and pancetta are:

I’ve found salt pork great for a simple edition of flavor for many dishes like beans or stews, but it’s really just adding the mouthfeel, it’s salt and pork!

Pancetta is a more refined type of dry-cured meat, created and made famous in Italy. Don’t get me wrong, salt pork is famous – since it actually was taken on voyages to discover and uncover the world, to the western civilization.

It was traditionally made very salty so that the preservation effect was achieved. Bacteria don’t like salty meat.

Read on to learn more about the things that set these two apart. The difference between salt pork and slow-crafted pancetta is clear once you know what you’re looking for in the meat.

Difference between Salt Pork and Pancetta in Detail

Pancetta is a salt and spice cured pork belly, it is dried to a point where it can be eaten without cooking. Salt Pork is heavily salted to preserve it and has more fat, it’s a condiment to add to stews and other broths.

At first glance, pancetta and salt pork may look similar (well not the above ones). However, the closer you get, the more clear the visual differences will become.

In general, each meat has the following look:

You wouldn’t eat salt pork thinly sliced, it would just be way too salty.

If you’re on the hunt for pancetta in a grocery store, look for it rolled (arrotolata) up or flat verison (tesa). Pancetta often comes in slices or whole peices.

On the other hand, if you’re looking for salt pork, it will likely be in a block or thicker slices generally.

Sometimes, you can buy both of these meats in a solid, chunk format you can divide up yourself. But slicing wafer-thin pancetta is an art in itself!

Pancetta is classic Italian meat. Often displayed on classic antipasti or charcuterie board.

In Italy, it serves as a complement for soups and plates of pasta. Pancetta has been around for as long as the 15th century or longer. On the other hand, salt pork has a super long history, possibly thousands of years – since salt has been used for preserving for milllenina.

Pancetta has been refined by Italian food culture, it’s had more time to reach perfection – but has a lot to do with the cultural focus of food also across Italy.

There are many delicate recipes with pancetta, whereas there are not as many with salt pork. If you’re looking for meat with a history, pancetta is the meat for you. Plus it’s refined, and should be savored!

Before you can eat either of these meats, it’s critical to understand how you need to prepare them.

Most proteins require cooking before ingestion, but pancetta is cured/dried carefully (learn about this with my online course)

Are pancetta and salt pork any different? Yes, pancetta can be eaten without cooking because it’s cured carefully and dried.

Salt pork needs to often be purged of the concentrated salt in it, or the salt in the salt pork is the main seasoning in a stew/broth.

What is the process to edibility with each of these?

Typically, pancetta can be ingested either uncooked or cooked. Several pancetta dishes can be created by just using the pancettas as is.

On the other hand, salt pork must be cooked before you can enjoy it.

Both salt pork and pancetta are high in sodium. This level occurs because both types of meat go through a curing process before they’re are finished products.

Each of these curing processes is different, setting salt pork and pancetta apart from each other yet again.

Each curing process is different for these meats.

Pancetta is more thought-through than salt pork when it’s made, thanks to the Italian legacy of the food! Of course, there are huge variations in quality for both products.

Each of the products varies in the amount of meat they have inside. Pancetta has more protein, while salt pork has more fat often.

Salt pork comes from the fattier and often older animals belly, so you’ll get a fattier overall structure.

It’s also because salted and dried meat that has a lot of hard fat doesn’t shrink or dry as much. Fat contains less water, most pork meat contains about 70% water, 20% protein.

If you prefer less fat on your meat, pancetta is the way to go. It will give you a delicate taste.

There are a lot of delicious cured meats out in the world, and two of the best are pancetta and salt pork.

If you’ve ever eaten either of these meats, you might be curious as to what separates the two from each other. It can seem like they’re the same meat if you don’t know what to look for in the product. So hopefully, this has given some insight!

Many qualities separate salt pork from the pancetta. They have different curing processes, varying amounts of meat, and are presented differently in a grocery store or market. The food you choose is up to your taste buds. Both pancetta and salt pork are delicious in any meal.

And what I’ve learned over 20 years of doing this and savoring it!