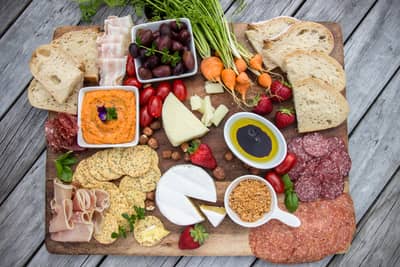 The Italian cured meats topic is massive, from living & visiting Italy – my studies of the traditional aspects have been up close and personal. Even venturing to Norca, supposedly the beginnings of salumi and dry-cured meat in Italy.

From studying classic Italian meat curing for decades, here is a complete breakdown of the traditional Italian cured meat world. You might become a fanatic like myself after learning some more.

Let’s start with some of the most popular salumi, seven major pork muscles that make Italian classic salumi. From a purists perspective, this will give you the basics and hopefully a better understanding of something that may seem confusing but is absolutely delicious!

Following on below, there are thousands of salami variations across Italy, here are some common classics.

Opposed to the modern butchery approach used for many Western countries now for the pig, the traditional Italian salumi style was based on minimizing the waste and dry curing whole muscles so they would last longer during the leaner months of the year.

It’s the quality of the pork that will define how good traditional prosciutto actually is. Considering this was made during the Roman era to start off with. It represents pure simplicity and pleasure.

Crafted over time to preserve and intensify quality pork meat.

Some are aged up to 48 months before being sold and consumed.

Prosciutto is seen as a very special Artisan product in Italy (although it has been rather commercialized as well). These long term legs are normally reserved for people all over Europe and the world, so I’m told.

The top-end of the Italian scale, the Parma Ham pig gets a grain diet but a key difference is the leftover cheese whey from the Parmigiano-Reggiano cheese region nearby (Hence the name Parm-a Ham!)

Protected Designation of Origin (PDO) is given – a European Community Certification that protects traditional methods and also a geographical area of production.

Lastly, because of the PDO and incredible scrutiny – no nitrates are used in Parma Ham Parma Ham. It can only come from Parma.

Pork belly either flat (tesa) or rolled (arrotolata), as opposed to bacon. Pancetta when finished, has enough weight loss from the dry curing to be eaten without cooking.

This is a useful cured product that is used in the infamous classic – carbonara pasta!

Made from the middle area of the ‘back steak’ from a well looked after pig, this cut is the loin/fillet, a beautiful boneless piece of meat.

A great cut to use for wild game animals, though many muscles are good from my experience for this type of salt curing.

The classic lonzo has a thin layer of fat around the edge.

From the back of the , this is the back fo neck area, this upper loin cut has some small areas of fat.

There are many spice variations for traditional coppa, especially across Italy.

A US-style butchering of a pig would cut this muscle in half instead of keeping it as one whole muscle. If you wanted this whole cut from a butcher, you may have to make a specific request.

Super Pancetta! It’s a part of the pig that has more texture and decent amounts of fat too.

Sliced thinly or used to enhance flavors of other dishes it has a lot of versatility just like pancetta. In Italy, it is used widely in pasta, like carbonara of course.

Depending on how it’s butchered sometimes it has the cheek sometimes not. Guanciale translates to “Pillow”.

Being a shoulder muscle it relates to the prosciutto flavor often, bone-in or out – it’s versatile salumi for cooking or just thinly slicing and eating. Traditionally only salt, pepper and washed with white wine following traditional Italian culture.

Of course, only the finest pork fat is used, and it’s salt and herbs that turn this meat into the ultimate form of butter! DOP (Protected Designation of Origin) exists for Lardo di Colonnata.

Probably the key difference being, lardo is salt-cured in marble from a little local town on a hill called Colonnata-Carrara. The marble supposedly gives some characteristics to the fat.

Being a smaller cut, this is a great beginners salumi. Finding well cared for and well-fed quality pig is the key to making this a special. My advice would be it’s best to find quality local sourced pork.

This cut is like a pork chop without the bone, and it is super lean.

I did a bit of brainstorming about common and obscure cured meats, if you want a look at 50 great examples of cured meats, you can find the post I wrote here.

If you have an interest in maybe trying something in your kitchen fridge, I have done some experimenting – and wrote about what works, check out the guide I wrote here, it’s an amazing hobbie to get into. Please find a link here.

With a combination of either pure pork, beef or other meat. It’s about fermentation early on to create some tang across the taste buds.

If this is (or becomes) your passion, you can actually purchase various good bacteria cultures (bactoferm for instance) with different taste profiles to play around with.

Once the fermentation is done after a few days, the dry curing begins. Sometimes light smoking is added to traditional Italian Salami.

Traditionally a long, well-dried salami for the hunters of course! Wild boar is a key ingredient for the classic, wild venison is also used. Lots of spices in this creation

Originates from the province of Parma. Simple garlic and wine flavorings – but the pigs here have a very long history – 5th century BC actually.

A spicy salami which comes from the south of Italy. Chilli/red pepper flakes are present here.  But other flavors are used to balance this.

Pepper & chili are the main ingredients, large fat bits throughout – there are a lot of regional differences across Italy with this style.

From around the Milanese area, spiced and lightly smoked style is classic.

Common in Southern Italy, this is more than likely the beginnings of pepperoni when Italian immigrants arrived in the Americas.

Being cut in Italy at the supermarket….by hand!

Gloriously emulsified, this holds many spices and is a classic from Bologna, Italy.

Truffle & Pistachio encrusted mortadella is divine – if you can find or make it!

It was actually in Sicily I saw a giant supermarket Pistachio encrusted Mortadella, expertly cut by hand with a thin long saber knife!

Hot smoked to cook it and cold smoked to flavor it – garlic and caraway to give it substance.

I love all forms of pepper and pepper flakes.

The above is a definition taken from ‘Gastronomique – Larousse’. The encyclopedia of French cooking.

Restaurants & bars have used Charcuterie because it sounds very marketable I suppose. If you want the classical definition, I wrote some more information in another post, please find it here.

The Purist vs Modernist

On a charcuterie board, a mix of tasty morsels is always appreciated. I just love to appreciate the evolution over thousands of years through creating dry-cured meat. The reason meat curing began was to preserve foods for the leaner months. Now, it has become I kind of art form and experimentation is happening all over the world.

In Roman times, it had a lot to do with shelf life and preservation. Indeed, it still commands much respect in the Italian food culture and I think is at the epicenter.

There are some incredible combinations of flavors and techniques now used in the world of salumi & meat curing. Since there is delayed gratification for many variations of salumi.