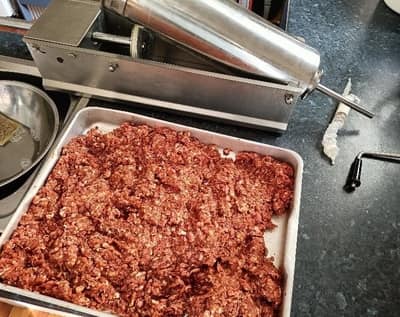 It’s a MASSIVE topic, and what I’ve learned has come from many resources, since the online content of this is still lacking a bit. It’s another reason why I started this blog www.eatcuredmeat.com.

For nearly any sausage or salami there is one golden rule, you need 20+% fat to meat ratio. Some cuts carry more intermuscular fat than other cuts too. What this means, is the meat is embedded with fat rather than it being clearly white and meat separated like pork belly.

I’ve learned this the hard way when I use wild meat like venison for sausage or dry-cured salami – in terms of not using enough fat. For fresh sausages, it’s very important, for dry-cured salami not so much since you are salting then drying not cooking.

I will cover the main aspect of beef and pork that you will use for most sausage making.

But just remember, if you are going to use lean meat like elk, venison, tahr, reindeer, bear, wild duck, wild rabbit, etc… You will need that 20%+ fat. Ideally, neutral-tasting fat like pork – it should be back fat as well (hard fat, higher melting point in terms of temperature).

Another aspect is that I am talking about non-emulsified sausage generally – so that means no ice or added super cold water to get that smoother texture via myosin extraction of the meat. (This is when you get that generic smoother texture of meat, emulsifying is the same technique why mayonnaise is oil and egg but it’s creamy and amalgamated)

Another tip is to buy whole muscle with the bone in from a butcher, you will pay less per pound or kg. I love whole chunks because I can make healthy broths and stocks with the bones. This is a real bone-ness!

You can not go wrong with pork as your primary meat since it has fat and lends itself well to sausages/salami. I am really when you think about it, it’s what a sausage is nearly defined as – pork included.

But I hunt and use various other meats, I’ve made and researched exotic styles like Asian sausages with may include fish or lamb for an instance.

Best Cuts of Meat for Homemade Sausage or Salami

When we are talking about Pork, the shoulder which includes the butt is often a little fattier. It does depend on the age of the pig however too and what it’s been fed etc.

You can mince/grind the entire hind leg of the pig if you have it, but it depends on what your want to achieve. This way, you would want to then make sure there is that 20% fat ratio.

The sirloin, ham, and lots of the ‘roasting’ types of cuts are on the hind leg. But it’s your call!

I’m going to cover the most useful aspect of sausage making for each meat type:

We are going to be talking about ‘prime’ cuts and ‘sub’ prime cuts. To keep it a little simple prime cuts are steak cuts or fast frying/grilling or great for roasting.

Since bacteria form faster on ground or minced meat due to oxygen exposure, buying minced meat is not something I would advise. Unless it was ground meat in front of my eyes.

The Best Cuts of Meat for Sausage Making

Pork Shoulder may contain a fair amount of fat, especially from a more mature animal (over 8 months say).

There are variations, so I am giving generally guidelines in this rundown.

What Meat to Use for Sausage Making

Shoulder meat from venison, pork, or beef is very cost-effective since it’s a less than desirable cut. There is nothing wrong with the shoulder.

But often when I harvest deer, it’s the forequarter or shoulder that is the most work to extract for the least amount of so-called ‘prime’ meat, deboning it takestimes.

So cubing it and mincing it takes time, but it’s a good lean cut to add to the mix -wild venison (in New Zealand).

Might sound a bit crazy for some folks, but fresh chicken can be used for sausages, pretty much any meat from the chicken that doesn’t have bone on it, ie deboned carefully. Chicken takes on bacteria fast, like fish – so processed this meat fast is key.

Of course, fillets and no bone for a fish sausage sounds crazy for a Westerner but South East Asia has many exotic recipes for this type of sausage (Lemongrass, ginger fish sausage – yum!).

Chuck, which is the shoulder of the bovine is cost-effective for sausage making, brisket was cheap. Since Low and Slow BBQ has become fashionable, so it has gone way up in price in the western world.

Cooking programs have also changed the demand for pork belly, I use to be able to nearly get it for free from the butcher! I think its 3x or 4x the price now.

Any decent deal on whole muscle meat is fine, some older bovine maybe have tougher sinew connecting the muscles, so you may want to remove this for your sausage grinding.

There is farmed and wild venison. Anything farmed has a softer texture in terms of the meat and especially the sinew that connects the different muscle groups together.

After processing many 1,000’s pounds of harvested meat, you noticed it.

With wild venison or boar – I like to take off a lot of the tougher sinew. It will undoubtedly get stuck in the mincer/grinder. For farmed pork, I don’t have issues and sinew is left on – unless it feels tough.

I would say, if I can pull off the sinew by hand, it’s ok to go into my sausage meat grinder, as a general rule.

I am lucky and have a place where I can order frozen pork back fat, if I feel the ratio is too low for meat/fat, I can order a bag at a reasonable cost.

For instance, this is pork shoulder 90% and 10% pork belly for some Hungarian Dry Cured, 18hr Cold Smoked Salami – maybe it would be approx. 15% fat, but with dry-cured salami. A little less fat, you can get away with since it’s not cooking it – where the fat would keep the sausage moist. It has heaps of paprika also garlic, cumin and black pepper

Pork fat is very neutral, compared to pretty any other fat. That is why it’s used as the main fat for sausages or salami. Even for a lot of recipes that are not pork-based.

Beef fat or tallow has a different flavor altogether.

I know in different parts of the world venison fat is quite relevant, but often guys don’t want to use it, since it has a different odd flavor for sausages.

Has a 15-25% ratio generally – with separate and intermuscular fat (again depends on the age/diet/exercise of animal -these are generalizations).

I often get a cross-section sliced shoulder roast from the butcher on special. Because it’s easier for them and more economical. It has bone and a little skin, so I remove this and cube it up.

I dry out the skin and make crackling, just add salt and cook at high heat.

The bones get put in our ‘broth/stock’ bag in the freezer when we have a full bag – we make stock/broth! superfood!

I would prefer to breakdown a half or whole pig, but around where I live – pig breeders kill the pigs pretty early, so I need to find a way for someone to age a pig for longer than a year to develop more fat (and a special diet I think, acorns from the local park! This is what Iberian Jamon Dry Cured Ham is finished on).

Loins I would generally not use, since it’s a great steak/prime cut. Rump as well is versatile, but it really depends on what I can get.

As mentioned above, especially for pork, you get a lot more fat. It’s also going to relate to how much movement the animal has been accustomed to.

Pork or Beef Liver can be used if extremely fresh, animal butchered within a few days and liver kept refrigerated.

I’ve got recipes for offal sausages, but haven’t yet pushed the button on making these ones!

Meat Needs to be Fresh

Bacteria growth of meat is exponential, this is why it’s so important to keep the meat chilled, slightly above freezing after it has been killed.

Also when mincing or grinding meat for sausage or for that matter binding (releasing some of the myosins in the meat for tackiness) you want to be operating at just above freezing level. It’s all about minimizing the bacteria.

If the meat was frozen fresh, it can be used for making sausages or salami.

I will often cube up fresh meat and freeze it for salami later, just remember though, if you are making fresh sausages from thawed frozen meat. Once you have made them, it’s not advisable to -refreeze the meat.

“Good cuts of meat make good sausages. If you are brutally efficient, trim out all gristle, sinew, and excess fat & blood clots,”. save those trimmings for later.

Emulsified sausages (hot dog, bologna), headcheeses and liver sausages need the lower class of meat (tendons, gristle, skins, deboned meat) that is very rich in collagen. But you need to have a commercial heavy-duty grinder to actually get this stuff minced up properly.

My friends have these 1HP+ grinders, but I am currently reviewing a 1/2 HP, which is great for 10-20 pounds mincing runs.

You’re probably best to leave it out of your meaty sausages.

In some countries, the situation is so rampant that a hot dog contains only 15 % of meat and the rest are fillers, binders, and flavor enhancers. But it looks presentable, has an acceptable taste and most important is reasonably priced.

Also, the British and other western countries were fond of ‘bulking’ up the sausage with breadcrumbs or some other derivative, since meat is traditionally a luxury type of good through the ages.

It’s not my style to use fillers, but I realise it has origins from a lack of resources historically. Meat is a luxury too! Not a commodity in my eyes!

There are a lot of grinders I have seen available that are less than adequate. You have to have a certain level of grunt to get the job done.

If you don’t have the power, then the grinding becomes pathetically slow, you also get much more ‘binding’ or ’emulsifying – instead of the meat cutting it’s squishing it.

Here is a link to decent grinders that you should consider for sausage or salami making.