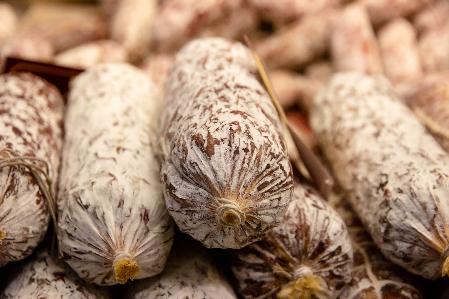 The sour flavor that is quite common in salami most people are pretty familiar with, I will share what I know about where it comes from.

I make salami at home, and it is in the simple process normally requiring a fermentation stage and it drying stage.

Having met a bunch of small and large salami producers – I’ve got a bit of insight about the subject.

Since salami is minced meat, the meat is exposed to the external environment (oxygen, anything floating around) more. Which means you just have to follow some precautions to make sure the end product is safe and delicious.

The other type of meat curing I do and is well known is whole muscle dry cured meat – like proscuitto or pancetta. This doesn’t have the sourness because this doesn’t have a fermentation stage.

The sour flavor is basically the lactic acid bacteria that is inside the meat, it is a byproduct of consuming the carbohydrates/sugars naturally occurring or introduced into the cured salami.

The fermentation stage is all about lowering the pH level, therefore raising the acidity which creates an environment that many bacteria that spoil the salami don’t like and can’t survive (For whole muscle drying – salt, nitrites/nitrates, and possibly cold smoke are used).

Things like wine were used one fermented product helping another!

In the modern days and for the home salami maker, you can buy different types of starter cultures (here a scientific brochure link if you’re interested) with different levels of acidity and flavor.

This is also what is used for consistency in commercially made salami.

So in short, here is why salami is sour, then I’ll get into a little bit of the nitty-gritty about the delicious and mysterious world of salami – contrasting commercial and small production.

Why is Salami Sour?

Salami is sour due to lactic acid being produced as part of the fermentation process. The lower pH level increases the acidic environment. Higher acidity helps preserve the salami and also creates sour and tangy flavors sometimes.

What Does the Sour Acidity do?

Preserves and encourages types of bacteria inside the meat that is of benefit. But also it is used sometimes as a shortcut to producing salami very quickly in some large commercial salami making factories.

Quite often that tangy salami taste instantly tells me that the salami was produced fast for profit.

Many commercial made salami are produced in 1 to 2 days versus traditional dry-cured salami. Which mellows out over 2 to 5 months depending on the diameter and conditions of drying.

Yes quality salami takes that long to make! For me it’s worth it, intensified flavors, complexity of fermentation and something to be savored.

Good things take time, like anything in life. The opposite to fast convenient thoughtless food.

You’ll find with traditionally made salami, often over the longer period of time it takes to make. The acidity and sourness can mellow out, it becomes more subtle.

This can sometimes be a way of telling salamis apart.

So the way I’ve made most of my homemade salami, is introducing a good starter culture and holding the temperature at a favorable condition for the culture to develop. This is after the flavoring and salt cure has been mixed through salami and stuffed in a casing.

After salami fermentation, I use a homemade curing chamber to lower the temperature and start the drying process of the salami. Sometimes cold smoking is used, sometimes it’s not. This is basically the traditional way of making dry-cured slow-fermented salami.

This is a “good bacteria” that is the cornerstone of salami making, its the same good bacteria that’s in your gut and all-around your body.

You see it advertised on yogurt a lot.

It’s funny how these days people are so averse to certain bacteria, not knowing that we’re pretty much symbiotic with a lot of good bacteria to exist. So much focus on kimchi, sauerkraut etc.. all fermented goods!

What you’ll find quite often on the back of the commercially made salami is the addition of sugars so the fermentation can happen rapidly. By acidifying the meat quickly the commercial salami producer can preserve it and sell it a lot quicker than traditional salami.

Here is an example of what I consider a large factory commercially made salami:

Dextrose is used to quickly feed the bacteria so the fermentation happens fast. A pure or easily digestible sugar for the bacteria.

Traditional Salami Ingredients should be:

White Powder on Salami Whats That?

This normally means the salami is the real deal. It provides another protective mold on the outside of the salami.

This is actually penicillin, a good mold that often naturally grows when I make salami. But can also be purchased and applied to salami to make sure that the protective coating flourishes. It protects the meat, but also allows the salami to dry out, to lose moisture, and preserve it.

For homemade traditional dry-cured salami the goal is always to lose 35 to 40% of the moisture it is they considered dried and preserved.

At this stage the water activity and amount of water inside the salami has been minimized to the point that bad bacteria that have a chance to spoil the product.