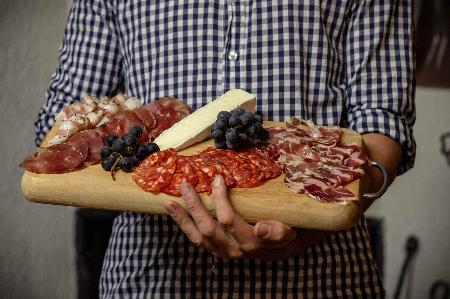 It gets asked often around here – what is traditional when it comes to charcuterie platters since cured meat like salami and prosciutto are generally the cornerstone of most classics.

There is so much variation around, and that isn’t a bad thing.

Though, there is also a reason why the classics are classics – and have been successful for so long across Europe. I love fusion and new ideas, however, the hundred or sometimes thousands of years of tradition around cured meats for me, need to be respected sometimes.

From what I have seen and been lucky enough to experience, I will put together some tables below so you can visualize some of these classic charcuterie components that stand the test of time.

I was back in Italy recently for 3 months, contrasting the regions gave me some insight into how they do things over there.

What a Traditional Charcuterie Platter Includes:

Pronounced “Sharkcuutaareey” – here is a brief ‘how it’s said properly’ on youtube by a French man.

In 15th-century France, local guilds regulated tradesmen in the food production industry in each city…..members of this guild produced a traditional range of cooked or salted and dried meats, which varied, sometimes distinctively, from region to region……charcutier prepared numerous items, including pâtés, rillettes, sausages, bacon, trotters, and head cheese (brawn). These preservation methods ensured the meats would have longer shelf lives.[2]. Charcuterie became symbolic then to lower status peasantry

So in the pure sense of the French word charcuterie, it’s really about making the most out of the many different aspects of a pig or animal. This is the new but old idea of ‘head to tail‘ use of an animal (especially the pig), which is actually a very old approach. It was the common folk, that wanted to get the most of out the animal that was killed/harvested.

Most Western cultures seem to get a little squeamish when it comes to using offal, organs or intestines (Funnily enough most people don’t know the dry-cured salami bought or made are often ‘casings’ which are intestines – therefore a form of offal.

But with bits of meat that are kept in a refrigerated area, they can last a while, especially if aging whole muscles. But offal needs to be eaten fresh or cured to be preserved.

click any of the below if you want to buy it online or the title will link to further descriptions I have found.

Oh, and then there is cheese. It’s a bit scary to start writing about French cheese – since it is a large and nearly incomprehensible topic.

Just some of the classic French charcuterie cheeses I know:

Brie de Meaux – known as the French ‘Queen cheese’, but supposedly enjoyed by all the citizens from peasants to royalty since the 8th Century. (link to cheese.com details)

For a serious breakdown of classic French cheese, check out this site all about France & Cheese!

So you can see above, this is really pure classic French when you use meat of different bits and pieces to create all sorts of wonderful things and cheese.

Being French, there is a lot of time spent to produce these goods – but like the Italians, there is a reason why people travel or move to France or Italy just for the food! (Good things take times, liked cured meats)

Also known as Salumi / Salami / Dry Cured Meat – charcuterie meat in the Italian interpretation encapsulates all of this.

So picante salami, cacciatore, braesola, prosciutto and pancetta – are all examples of this.

But, really what Italian classic charcuterie boards are now, are really antipasto platters or boards!

What I have seen over and over in Italy are the Salumi classics like the above, then some delicious Italian cheese (hard, fresh or aged – it varies) and finally some preserved vegetables like courgette for example.

Here is a good example I saw numerous times in different regions over a few months in Italy – https://www.gustissimo.it/ricette/antipasti-salumi/antipasto-di-salumi-all-italiana.htm

A lot of the Tuscan and Umbrian classic charcuterie board styles had a great focus really on cured meats and cheeses. It varies region to region of course, but it seemed to always come back to classic Italian antipasti (plural). Antipasto (singular) and Antipasta (a confusing term, which doesn’t mean anything). – Trust me I wrote a whole post of this here.

Antipasto (antipasti) “before the meal” – the idea here is a plateful of goodness to stimulate the taste buds before the main Italian dishes start rolling out in abundance normally.

Antipasto means literally “before the meal.” It is an Italian platter of cured meats, various cheeses and marinated vegetables served as a first course before the entrée. “Antipasta” is an erroneous colloquialism for “antipasto,” a mistranslation of “before the pasta.” The plural form of antipasto is “antipasti.” Unlike hors d’oeuvres or appetizers, antipasti are served before traditional Italian meals to stimulate the appetite.

Since there are so many dry-cured meats in Italy, it really does blow the mind the variations from region to region. But very often I had the classics like lonza (pork loin), prosciutto (pork leg) and pancetta (pork belly).

An Example I had in Umbria:

Every classic Italian charcuterie board I have had in a small town around Italy has had a big focus on dry-cured whole muscle salami, and cheeses.

When I think about it, there is definitely a reason why so much Italian food is perceived as classic and long-standing.

They really are doing the same things they have always done, with little variation through much of their history, I’m putting this in the context of more rural place across Italy.

It’s of course very different when it comes to the melding and fusion of cities in Italy or anywhere across the world. Again I don’t think this is a bad thing, but I’m talking here more about classic charcuterie platters.

Anything can work, and when it comes to a platter of modern interpretation, there shouldn’t be any barriers.

The one above has our homegrown vegetables – carrots, strawberries

So soft or hard breads and cheeses

Anything homegrown from the garden, fresh like carrots, berries, grapes etc.

Or if I can whip up a pesto with some basil or tapenade with some olives, I like to throw is one on as well.

Like anyone I love to see creativity and people putting their own twist on anything they do with food. And as they say, variety is the spice of life.

At the same time when I like to play around with a more diverse charcuterie platters.

In the back of my mind I’m always thinking about

From Kids fruit ‘charcuterie boards’ to <name a country> charcuterie, and anything inbetween – It’s all out there.

I think it’s a varied interpretation these days, since the word “charcuterie’ has been used by many restaurants to give a more sophisticated word today appetizer or starter. But guys at home and many bloggers have reinterpreted it. I wrote this post to just highlight the classics and traditional since they have stood the test of time.

One of my favorite places that have taken on an experimental approach to dry-cured meats and charcuterie is a place called smoking goose.

This is a good example of, for me, the creativity that you can have when it comes to making your own cured meats and flavors in a modern twist.

If you always wanted to have a go at making your own cured meat, instead of having a full curing chamber which can be redesigned from an old fridge.

There is a technique used to make dry-cured meat in a normal kitchen fridge, and the projects should be taking 2 to 3 weeks in total. Time is needed to properly dry out the meat so it loses at least 35% of its weight therefore it is dried enough to be consumed and is considered preserved.

To check out the post on this find it here.