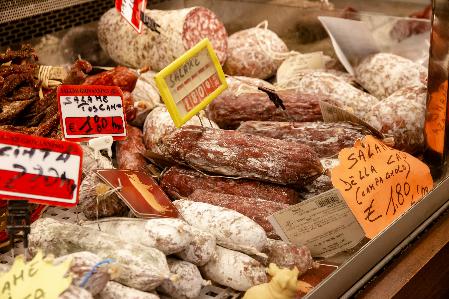 When it comes to charcuterie in all its forms and cured meats most of it I’ve come across is generally gluten-free, however that’s with writing bit more detail about this.

Since many people aren’t aware of the ‘fillers’ that are used in quite a lot of charcuterie products sometimes for good effect. But sometimes it does help ‘fill’ the product to make it more profitable. I will dive into what I know about the fillers and the flour and starches that he used in certain products.

If you’re after the easiest answer, read the ingredients and it will tell you whether it does or doesn’t. But to help I will elelaborate on what I know and make to give some more context.

I have always been keen on reading the ingredients of the products I buy. Either from the supermarket or the local market.

And being someone who makes a lot of their own cured meats and smoked meats. I’m going to over charcuterie and what I’ve seen to give people a bit more of an insight into it (but there will be HUGE generalizations).

I guess I think about food quite a bit differently. For a lot of people it’s all about convenience but I really get hung up on the idea that you are actually putting this INSIDE your body! Yeah it’s crazy!

So I want to have a good handle on what is in the products I buy at the supermarket.

There are exceptions especially if you look at cultures like Italy or France where food culture is the cornerstone of society (might be why people go on food holidays to these countries). When in Italy check out the junk food area of supermarkets, the months of travel I have spent there – always highlighted a lack of chips and fizzy pop).

Read the Ingredients, this will be the best practice to work out whether It has ingredients that are gluten free or not.

Charcuterie has a modern wide interpretation since so many restaurants serve “charcuterie boards platters”.

Generally they include a few cured meats like dry cured salami or prosciutto.

Maybe some chutneys, pickles, olives, humus, cheeses and of course said types of crackers and breads.

Sometimes other preserved vegetables with oil or pickled vinegar types. Rillettes and pates sometimes make their way into this category as well.

It’s a general example but seems to be most common. Unless you make your own boards.

Straight from a sausage/salami website here is a quote:

Flours and starches make great fillers, water absorbers, and binders. Flours such as corn, potato, wheat, soy, and rice are in common use in the Western world.

The guys behind this website Maranski and Maranski are some of the experts of salami and sausage making (at home and commercially in Europe) possibly in the world. These guys have written numerous books about the subject, which of course some I own. Incredibly technical and scientific.

If you’fd broadly saying charcuterie includes fresh sausages, then a lot of these would use binders and absorbing gluten-based flour as part of the recipe.

Also things like spam and baloney as much as I don’t like to think of these as cured meats they are and they are likely.

But also sometimes potato starch is used which is gluten-free so again, this to read the back of the label.

My Definition of Charcuterie & Cured Meats

Rillette which is basically pulled pork cooked in data nd then normally put in a jar. Very much in the French interpretation of charcuterie, a classic and relates can be made with all sorts of meats like rabbit, pork or even shrimp.

Pates are often based around the liver offal of an animal, these sometimes contain flour or breadcrumbs as a binder as well so it is one to keep our eye out for.

The classic duck confit is similar to a rillette, salt-cured duck slow-cooked in fat and then stored in a jar. But I haven’t seen any confit has gluten-based ingredient added to it.

Fresh Sausages (in France these are considered ‘charcuterie’)

As mentioned above sausages that are fresh and not salt-cured and dried. Meat ingredients, especially from a supermarket will have binding agents that are often gluten as well (breadcrumbs or flour).

When I make sausages at home, I don’t actually use any binding agents.

What most of this website is about, is dry cured meats. These are whole muscle pieces of meat that are salt cured with spices. Once these are cured they are then dried to a point where they are preserved and safe to cut wafer-thin and consumed.

Dry-cured salami and artesian all classic way is similar however there is an acidic fermentation stage with some salamis. Cheeky factory fast food producers use the acid-based effect to cure the product faster and get it on the shelf last (and it lasts longer on the shelf).

Classic dry cured salami does generally take one to four months to make.

You can make it at home with a small cut of whole muscle meat, I wrote a whole blog post on doing it in a regular kitchen fridge here.

Dry Cured Meats I Make That Do Not Have Gluten

Everything above does not contain any gluten, I know for sure!

As Per (Celiac Foundation)

Please note this is all about opinion, and it’s really hard to generalize – since the sites audience comes from all over the world!