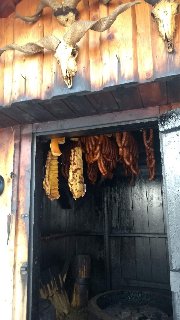 Preserving meat and fish with smoke is actually a really simple process, the effect of cold smoking help with the preservation but isn’t actually the primary preserving effect.

And it goes way back, this technique is still widely used commercially across Europe.

What I find quite a lot is the confusion between smoking meat, I do all types of meat smoking.

There is hot smoking otherwise known as low and slow, which is basically direct heat with smoke in the cooking chamber. The other main type of smoking is cold smoking, when I do this with meat you always are properly salt curing either with the dry or wet brine salt water cure.

Here is how smoking preserves meat and fish summarised.

To preserve meat with smoke, cold smoking methods need to be applied. This involves a salt cure to inhibit the bacteria, the cold smoking phase dries the meat to remove the moisture that unwanted bacteria need to survive. Smoke carries antimicrobial and antifungal properties.

Cold smoking is basically at below 86°F or 30°C, ideally with high humidity and a little bit of airflow (fish starts cooking above this temperature). For me, this means cold smoking at nighttime when the dew level is higher, like about 70 or 80%.

There is another type of smoking, which is warm smoking which is popular in central and eastern European countries, but in effect this is still cooking the meat to a acceptable temperature it’s just done slowly and carefully.

There is a lot of science about this across Europe, as I write this (2020), it isn’t really across the US.

The Role of Salt and Smoke in Preserving

Definitely what I have learned over 15 years of curing and cold smoking meat, is that salt is very important.

Salt creates this inhospitable environment for the bacteria that normally spoil the meat, we’re not talking here a little bit of salt seasoning when talking a little bit more than that (seasoning is often about 0.5% salt to the weight of the meat or less. Salt Curing is 2.5-5%, traditional salt pork is 10%+).

The modern method to work out if you’ve got enough salt in the meat to do preserve it, is called the equilibrium curing method. Taking a percentage of salt to the weight of the meat, you end up choosing how much salt will go into the meat.

Before the equilibrium curing method came about, the saturation method of salt curing was used and still is. Which means you saturate the meat in a layer above and below the meat basically.

The smoke is helping in a few different ways, however its not really the primary preserving effect.

Cold smoking or more accurately the smoke vapor holds certain antimicrobial and antifungal properties, so for thousands of years, it is being used to boost the effects of salted and dried meat.

By putting an extra layer of not just flavor but also protection for the meat.

When I do my cold smoking and various types of projects like this (cold-smoked cream anyone? Makes an awesome Potato Gratin!), sometimes it’s just a smoldering bit charcoal with some wood chips dropped on it. Some foods that are non-meat you want a cooler environment. For me 50-70°F or 10-20°C is what like for meat, well under that 86°F or’s 30°C temperature.

So what actually is happening is the meat is drying with smoke (vapor) flowing around it. As opposed to low and slow or hot smoking, which is cooking the meat with smoke flying around it (an oven with smoke basically often at low temperature, but I also use indirect or direct hot smoking – portable smokers are good for quick fish hot smoking for instance).

What are the Ways of Smoking Meat?

Here are a few examples preserving meat with cold smoking that I’ve done.

It is very common to see bacon that is been smoked, and a lot of people think that it will be preserved. But often is cooked until the internal temperature that’s a safe level, as soon as you start cooking meat you are not preserving.

There is definitely a lot of misinformation out there when it comes to smoking and preserving, a lot of people haven’t got the head around the subject properly.

Marianski & Marianski wrote quite a few books on curing and salami – which serve as a guide for much of what I write, they are like text books about meat science.

Any smoker that goes above 86°F or 30°C will not be preserving the meat with the smoke. But don’t get me wrong, hot smoked bacon is still delicious!

So these smokers are commonly barbecue only low and slow style such as,

However, any of these could be used for cold smoking, either by using an outside smoldering smoke fire with the proper hardwood and piping smoke in.

Another alternative I use quite often is a pellet tube smoker which basically just smolders hardwood smoking pellets and depending on how big chamber is, often I use my 5 burner gas grill, I smoke inside of it or an old kettle grill I have (putting the pellet tube underneath and closing up the area underneath so the smoke can drift up from the bottom vent.

Here is a post i did all about pellet tube smokers.

Why Does Smoking Preserve Meat?

It helps preserve by providing protection from microbes, fungus and bacteria. It is the drying and salt inhibition that primarily drives preserving.