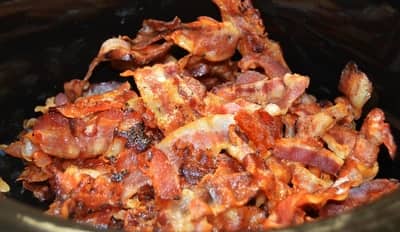 Pork is the main type of meat you can use for bacon, however, there are many different meats and styles with various cuts, let’s go into some detail and explore the options.

I have been making bacon from farmed and wild meat for over 20 years. I have used many different methods and styles, basically every style there is I think! The smoke flavor is a key component of bacon, you can achieve the smoke flavor even without the use of a smoker (more about this later!)

I have written all about this in my masterclass on bacon, which you can find out more about here. I showcased all the various ways that you can either ‘cure’ the meat (apply salt) as well as flavor the various types of meat with smoke.

For any type or style of bacon, generally, it has a proportion of fat. There are exceptions, however in general it’s got fat. That is what makes bacon, bacon!

One of the exceptions is Canadian bacon which is mainly made from the loin cut of the pig, often this is trimmed so that it only has a thin layer of fat around the outside.

In summary, the meats you can use for bacon:

What Meat to Use for Bacon

As mentioned pork is by far the main meat used for bacon here is a table showcasing the most popular bacon and what part of the pig they come from.

To begin with, these are the main areas of the pig above where a majority of western world bacon comes from pork belly, shoulder, and loin.

There are other cuts that are used to make the slightly lesser known but still popular in different countries types of bacon like:

Like the name, this cut of pork bacon comes from the neck and shoulder type of area. It often has a fat curve on the outside of the cut.

Loin and Belly combined to have a larger cut of slice of meat, this is quite unique I have found. Specific butchery needs to be done for this cut.

Pancetta is Not Bacon

One way to offend any Italian is to call pancetta a type of bacon.

Pancetta is made from pork belly, however, it is spiced a certain way and dry-cured, which means after curing. The meat is hung in an appropriate climate, it is very rarely smoked. Often pancetta is appreciated sliced wafer for antipasti or cubed and cooked for pasta or stew.

With some amount of fat in most places of the pork, the hind leg or back leg is one of the few that may be less than most other areas.

Therefore, I believe these are the other main options,

Here is a list from the front to the back of the pig.

Now of course, again – it depends on the age, diet, breed, and environment will vary the pigs’ fat ratio.

It again depends a lot on the animal, age, breed, and condition. These factors will determine the fat amount.

Short Ribs, chuck, or beef belly – this is basically all the same cut. Often with good amounts of fat.

Due to the variations of a bovine creature, many different muscle groups could be used.

Lamb’s belly is the obvious main area of focus, but also the shoulder, if it has enough fat can be used.

The commercialization of turkey bacon has often been driven by an alternative to pork. Often two styles are used, either ground/minced meat that is bonded with additives.

Secondly, turkey thigh is used – I’ve often smoked turkey breast, but not thigh. This has been on wild turkey, not farmed. So they have had less fat development generally speaking.

Can You Make Bacon from Other Cuts of Meat

I’ve used all sorts of odd cuts to make bacon, it seems to always come back to how much fat is used generally speaking.

You need that fat, that’s for sure.

What Kind of Meat is Commerical Bacon Made From?

Mainly pork, often from pork that lives inside and doesn’t really get to see the sun. Traceability is often overlooked by most, and it’s funny too – since the decisions we make on purchasing will lead to the outcome of the world at large.

Also, I think a lot about what I am going to put into my mouth and into my body!

Which Cut of Meat is Best for Making Bacon

That my friend is up to you. Best is not a word that really can ever be applied – since we all see the ‘best’ differently!

Salt cured with a dry or wet cure, then either smoked with heat or cold smoked and dried. These are the methods used to make all types of bacon. Liquid Smoke can be used to create the smoke flavor without a smoker also.

Therefore, bacon is first salted, to give it the desired flavor, in more modern times equal or half the amount of sugar or another sweetener is used (pork and bacon do combine well with sweetness).

Then it is given the smoke flavor.

As an example, pancetta is dry cured and then dried. It does use pork belly, however for many to say this is ‘bacon’ is wrong.

Pork is the obvious one, but any of the other meats mentioned above can use liquid smoke to make a very authentic smoke flavor.

Liquid Smoke is like the captured condensation from smoke, in a liquid format. I’ve gone through this in detail in my bacon course.

What Gives Bacon its Flavor

Salt, Sweet, Smoke, and Fat – the flavor comes from the combination.

Saturated fat the cornerstone of bacon is also the most digestible and instant energy we can get, hence why many across the world get hooked on it!