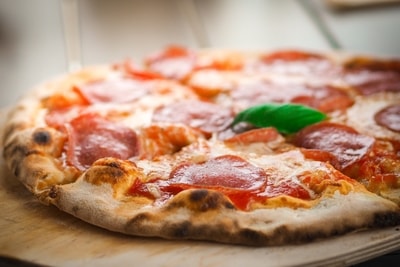 Picking the best salami for pizza, of course, comes down to your own personal preference. But I can give a few quick ideas around what works best for most people, after making and buying a truck ton of pizza! Being a complete salami fanatic, who buys and makes salami I can give a little more depth to the topic.

I’ll give a bit more insight into what makes a decent salami and also some of the shortcuts that are used in the salami making industry.

A good salami should take about 1 to months to dry out! (Losing moisture and intensifying the flavors).

First I’ll dive into the quick answer and then follow up later with a bit more info.

What is The Best Salami for Pizza?

It depends on what flavor is preferred. For deep flavor genoa salami has flavored with garlic and red wine. For peppery pizza, pepperoni is a preferable choice. For spicy salami pizza soppressata or Picante.

Those are the top pics for depending on your taste buds I think.

If quality ingredients are used, less is more when it comes to a fine pizza in my opinion (very classic approach). When I was a student we ‘loaded’ the pizza. It wasn’t pizza is ended up being a pile of food on the dough.

‘Italian’ Salami – is kinda funny to see this. Since there are literally hundreds of Italian salamis (in Italy). But it’s simple marketing to make the selection method easier for the consumer.

Now there are so many meats and breeds that can be used when it comes to salami, also mixtures straight pork or it’s mixed with other meats like beef.

Did they use decent cuts of meat? Or leftover bits and pieces from a factory production method (Don’t get me into mechanical process meat).

Now, of course, most of the salami you’ll find in the deli at the supermarket will be factory style salami and I’ll dig into a bit of what these curtails or involves a bit later. But depends on the supermarket, so do provide local small production as well.

Salami is the special occasion food for a lot of people, even though has been commoditized a lot, especially in the deli.

When it comes to the basics of pizza, of course, you can go any way, classic pepperoni pizza most of the Western world knows. My preference is to use salamis without nitrates, but you pretty much can’t find those unless you look very very hard.

The standard legislation in most countries is that they have to use some form of nitrates./nitrites, that there has to be some, nitrates are to make sure there’s no chance of bad bacteria growing inside the salami.

Even a lot of labels that say nitrate-free, they use an alternative like celery powder which is basically full of nitrates (and the label will say nitrate free, it’s actually synthetic nitrate free I think). Nitrates are in so many of the vegetables that you consuming every day anyway, it’s like minimal for the average Joe.

Good Mold or Flour on Salami Outside

Those cheeky corporate food producers actually have a cunning way of making salami look like the real deal when it’s not.

There is a good white mold that grows on the outside of salami and many cured meats, you’ve probably seen this. This is actually penicillin, yes penicillin just like stuff and hospitals, it’s a good mold that protects and enhances the flavor of salami.

It has a rather pleasant smell, compared to fake as white flour that is used by some factory food produces to make it look like the real deal. Or they actually print the white looking mold onto the wrapping! I’ve seen this in Italian discount supermarket too.

Lactic acid can be added directly into a salami which is part of the process of making it shelf-stable and quick to produce and get on the shelf.

This always leads to sharp tangy flavors and is a telltale sign of cheap dali salami.

You might also want to do a bit of research on high heat applied to nitrates and protein meat. From what I’ve read as long as they’re not cooked to a heated high they are fine to consume. Yeah I know, bacon is another one that might need some research.

What is the Difference Between Salami and Pepperoni?

Well, salami is the category, pepperoni is just the type of salami. If you go way back to where it came from, pepperoni is believed to be an offshoot of the Italian Picante salami.

What is Salami Fat, Spices, Acidity and Meat

Salami is a mixture of a lot of things.

Like anything, the quality of the ingredients and how it’s put together will dictate the outcome. Fir Sure pay more money for good salami from the small producer but at the same time just remember your actually ingesting it and putting this food inside your body.

You are putting it IN your body – sometimes we forget this.

Pizza traditionally is a very simple offering, whether its pepperoni or a classic Italian woodfired margarita pizza. I had the pleasure of spending quite a few months in many different regions of Italy and was lucky enough to be in Naples for the whole picture experience.

It sounds so basic but literally blows in mind done the right way and a woodfired oven.

There is like a strict organisation that checks all aspects from the hardness mineral content of the water to the region specifically the animals were from for the cheese – hardcore.

Instead of salami, one option is I saw in quite a lot of places was putting on cured prosciutto meat, but this would be after the pizza was cooked and cheese is melted. A margarita first.

You would have to find some incredibly touristy restaurant in the middle of Rome if you wanted a pepperoni pizza in Italy that’s for sure!

If you wanted to expand your repertoire , there are super fancy-schmancy stykes. Check out the French or central European versions of salami with nuts these walnuts will hazelnuts and these are very interesting salamis.

Or Truffle salami, encrusted with truffles.