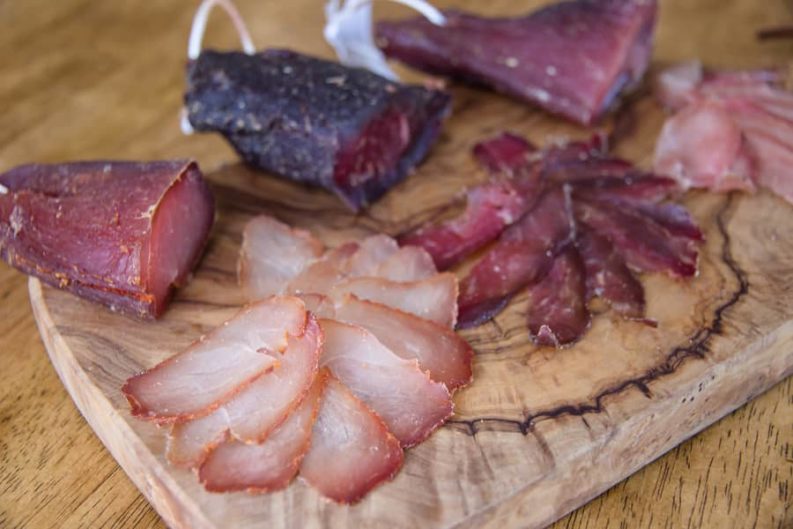 The tastes of charcuterie vary greatly but I’m going to really try and describe the ones that I have eaten a lot of, bought and also made at home.

Whether you want to try and make your own cured meats or you just want to get an idea of what they taste like.

This is page should hopefully give you a better idea. But just remember to be open-minded because it’s an ancient art, cold smoking and dry-curing meat goes back thousands of years for classic Italian styles, and much much deeper into history for salt-preserved meats.

Most types of fish when I was a kid I didn’t like. As I got older (and more open-minded), my passion in my young adult years started focussing on smoking and curing meats. The whole idea of new flavor angles and preserving was and is very exciting I find.

I’ve been lucky enough to try cured meats all across the world, and charcuterie is an ever-expanding category that sees cross-cultural ideas happening all the time.

I will try and describe the flavors of the main types of charcuterie in this list.

The Taste of Charcuterie

“Savoriness” – in a nutshell pretty much.

Along with the other major tastes like sweetness, sourness, and bitterness. There is another flavor it doesn’t get mentioned as much.

That is umami, which is the taste of savory flavors to give you some examples like,

And they say the most umami flavored vegetable is the mighty red tomato.

Here is a link to a page all about Umami – on the heathline website.

The modern interpretation of charcuterie is basically all those above categories which I’ll dive into next. It also probably covers anything you would put on a charcuterie board nowadays.

Although charcuterie boards are generally always going to focus on those dry-cured meats or dry-cured salami’s, they seem to be the highlights of the show on most of the boards I have eaten.

So charcuterie board condiments also include cheeses, bread, spreads like pesto or beetroot based spreads, crackers, nuts, pickles, chutney – pretty much anything with a savory flavor belongs on a charcuterie board.

Then, of course, some types of fruit which match the meat are my favorites like melon or strawberry.

These are the cornerstone of salumi and charcuterie – salt dry-cured meat, dried out enough to perfectly intensify the flavor and preserve it for the long term.

Umami, savory this the key to a lot of these dry-cured meats, when sliced wafer-thin – because they have been salt-cured., when they are cut translucently thin, there is balance with the amount of salt seasoning and the meat flavor generally.

I did go to Montenegro and found that their salt-cured prosciutto and some other dry-cured meats were too salty for me. Interestingly enough they generally cut the meat quite thick (like 2-3mm- yes that is thick for dry-cured meat), but they may have always used large amounts of bread or something to balance the flavor.

Words to describe the taste of dry-cured meats

The Italians have popularized a lot of the dry-cured meats of the world, and it goes back to Roman times. It’s crazy that nowadays Parma Ham is still just pork and salt (more on this later).

But the taste is something else, there is a flavor that develops when the meat is off great quality, and the pigs have had a good life and have been fed well.

Parma Ham comes from of course Parma, Italy (it has too to be called Parma Ham, internationally protected), where Parmesan cheese comes from. The leftovers from producing the cheese called the whey. Are fed to the Parma ham pigs, giving it a whole over distinctive flavor.

Some of the classic dry-cured meats are called Italian salumi which is the seven major muscle groups, in which the way pig gets butchered and chopped up. Some of them are very simple spiced and some of them do have a bit more pungency.

Like coppa which has the spice blend of juniper berries, peppercorns, and thyme.

Most dry-cured salami I’ve come across these days has some kind of the tangy taste, the reason for this is, the salami quite often has been fermented at the start of the process at the start. There are actually different flavors of this tangy or acidic flavor, which you can choose from to give different flavor angles with salami.

Many salamis are cold smoked but not all are, which also leads to another flavor angle.

When I’m describing the taste of salami I’m talking about quality crafted products which people care about and have put some passion into. Some of the factory food style supermarket salami might not quite have this level of complexity, at the end of the day corporate large supermarket food is generally about profit, not taste or passion (sorry corporate supermarkets).

Words to describe – the taste of dry-cured salami

There are probably hundreds of thousands of variations sausage flavors.

Every recipe I’ve come across for sausages always has around 15 to 30% pork fat (same with salami generally). Which gives the background juicy flavor and when you cook the sausage it stays moist (or should unless you overcook it0.

There are sausages made out of just about any meat in the world so this one really does vary and depend on where and what. But since you’re normally using the meat plus salt and spices it all depends on what the spices are of course.

German and Eastern European sausages are a must-try with white pepper & green spices in Central Europe or amazing paprika flavors of the East.

With pates it’s mainly around some form of liver or other offal, there is a bitter dark savoriness which comes from offal. It’s a bit of a pity that it’s fallen out of favor in so many of the Western world.

Since there is such a rich amount of nutrients to be had from a small amount of animal liver.

Words to describe Taste of Pates

Most rillettes are generally preserved meat in a type of animal fat. Being rich, I find it’s always best to use a small amount. The meat is basically cooked and then packed in a jar of fat.

Again the different spices that added can really change the flavors.

(really does depend on the recipe of course)

Bacon has a porky flavor people actually don’t realize that there is a flavor profile the comes from the nitrates that are used. A lot of the commercial bacon has a large aspect of salt and sugar, there’s something that people become have become accustomed to with bacon (ie. maple-cured bacon), sugar-cured bacon etc..). And then the bacon is often finished off with cold smoke, which gives it that delicious finish (I cold smoke my bacon with apple and oak).

I’ve made all sorts of bacon like ‘whiskey cured bacon’ and soft and hard green herb bacon – possibilities are endless.

Words to describe – Taste of Bacon

Pancetta is a classic Italian dry-cured and spiced pork belly. It has a lot of that savory umami flavor because it’s dry-cured until it’s lost enough weight. The flavor intensifies with all the spices and is often eaten without cooking like most dry-cured meats.

Words to describe – taste of pancetta

The cold smoking does change things a lot, but people don’t realize that cold smoked meats is basically just dry-cured meats with smoke added during the drying process. So cold smoked meat isn’t cooked, it’s dried until preserved via cold smoke kind of like jerky or biltong.

Classic cold smoked salmon is a perfect umami pairing, the type of wood you use can change the flavor of the salmon quite a lot as well. But most store-bought bacon won’t stipulate the wood, handcrafted bacon will maybe.

And it is quite a salty product that needs to be thinly sliced. Any type of cold-smoked meat will generally have a well-seasoned saltiness because it has to have the salt to preserve it to a certain saturation point.

Although for at home meat curing and smoking there are ways of ‘choosing’ the level of saltiness.

(Then it depends on the meat and the spices, there are so many variations across Europe – cold smoking is such a massive topic both in peoples homes and commercially)

Low and slow smoking is basically hot smoked but it’s taken on a certain angle with the barbecue smoked community.

Hot smoking is big in the United Kingdom, where it’s common to hot smoked salmon or trout in a more direct heat type way, like a portable smoker.

Hot smoking is basically cooking the meat whilst also generating some smoke.

The type of technique and the wood used can vary the tastes completely!

Most of the time, its a low-temperature rendering of a fatty cut of meat with some moist smoke happening. Sometimes for 15 hours (beef brisket).

If you haven’t tried low & slow BBQ, you need too!