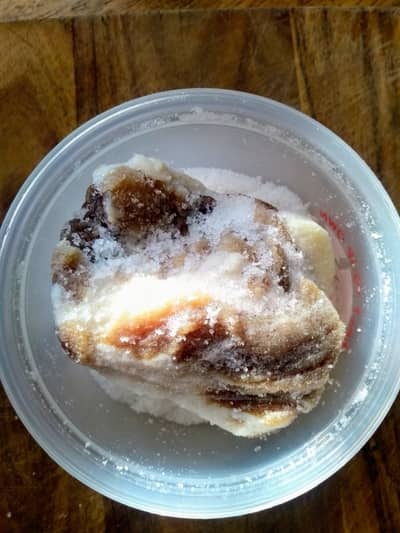 Cured salt pork is a common ingredient found in Northeastern dishes of the United States, it’s beginnings may have come from Europe, the Slavic countries call it Salo. But it goes way back many hundres of years ago, potenially thousands. When you consider the Romans were salt curing whole legs of pork.

This savory cured meat can work well in many different cuisines.

Cured salt pork is versatile enough that it’s worth keeping around in your kitchen any time you want to amp up the flavor in your cooking.

Cured salt pork is most commonly used for rendering into fat or flavoring one-pot meals like chowder or baked beans. Salt pork can also be used to add salt and fat to roasted or braised vegetables. Cured salt pork is a great way to add umami to any dish.

How Is Salt Pork Used in Cooking?

Salt pork is a cured meat that is most commonly used as a secondary ingredient rather than the star of the show. This is because cured salt pork is very salty, almost too salty to eat on its own without preparing it first.

Instead, cured salt pork is usually used in the following ways (Source: Food52):

Salt pork makes a great addition to several types of food, especially if you just need to add a little extra pizzazz to a side dish when you already have protein in the main dish. Below you’ll learn about some of the most traditional meals that incorporate cured salt pork.

Really any stew can have that mouth feel added to give the savory side a real boost.

As you can see, cured salt pork is a versatile ingredient for adding meaty umami and salt flavors to a wide variety of dishes. Whether you need it to pump up a plate of roasted vegetables or as an extra boost of flavor in a side dish of mashed potatoes, cured salt pork can make a big difference in the final quality of your meal.

Cured Salt Pork Is a Great Addition to Many Meals

If you need a secret ingredient that will have houseguests asking for the recipe, cured salt pork is a good one to fall back on. This product works well in any savory dish where salt and umami flavors are needed to help boost the natural sweetness of vegetables and the bland texture of starches.

Where Does Salt Pork Originate From?

Along with hardtack, salt pork was a standard ration for many militaries and navies throughout the 17th, 18th, and 19th centuries, seeing usage in the American Civil War, War of 1812, and the Napoleonic Wars, among others.