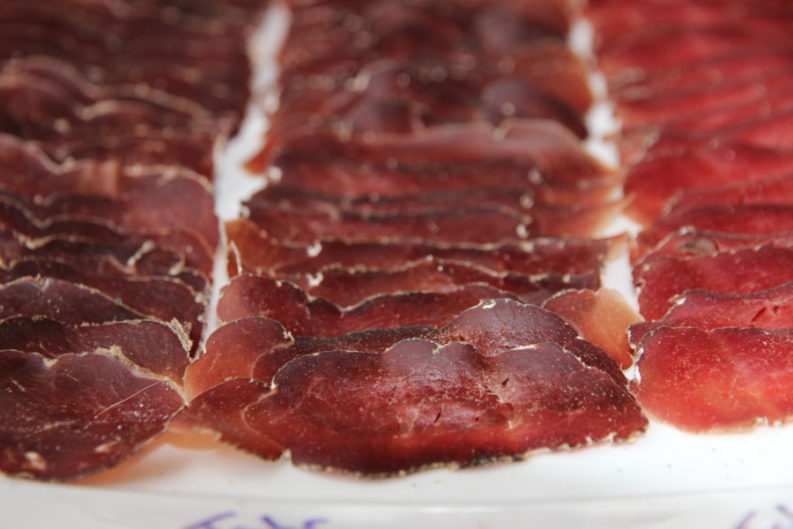 The different methods for curing meat with salt goes back thousands of years. Although the methods have been refined over the years the basics are still the same.

Dry curing and smoking meat taught me a lot about the powers of salt. So I did a bit more research about the history and summarized the information below.

Methods of Curing Meat With Salt

All these different methods of curing meat with salt, on the outcome you’re trying to achieve. I personally have focussed on flavor, but sometimes I need something to last 2 or 3 weeks if I am heading in to the bush for a while.

Before making just about any salami or salumi you are primarily using dry salt curing. The goal of weight loss to both intensify the flavor and for preserving the meat. When all the factors align and the good bacteria is kind to you, you end up having some artisan delights savor.

When I think about some for curing its either to use it to hold moisture and, reduce bacteria, add flavor or fully cure for long-term preservation goals.

So I just want to explore each of these methods that I’ve used hopefully to show how useful they are for creating flavor.

Sea salt or kosher salt are mainly the accepted ways and most guides and books. Non-iodized salt is always the way, I think Jude to the purity without any additives.

Salt pork has quite a lot of history, going back to the 17th century. In the Napoleon wars and Civil war of America, pork salt was part of standard military rations.

Heavily salted pork is left to cure for at least a week. The cuts of meat used was primarily pork belly. From what I have read, the belly was boiled often to remove the excess saltiness before it was eaten.

What is Salt Pork & Fish used for?

Back in the day there wasn’t really any refrigeration. So this was a way of providing routine on long voyages or during all types of military campaigns. It seems also the homesteader was able to use this quite easily.

There are quite a few ways that dry salt curing is used.

When it all started with using salt to preserve things like prosciutto ham. The whole pork leg would be packed in salt for many days. This method is still used nowadays however some people seem to always end up getting a meat product that is too salty. I guess back in the day, as long as the prize pool was preserved you weren’t too worried about this.

It’s one of the ways I use salt for curing quite often, making a Scandinavian dish called gravlax. It’s traditionally used to cure a salmon fillet. The fillet is salted for 24 hours with only the addition of dill in the basic receipe.

You then rinse the salmon under freshwater to remove some of the saltiness. If it is still too salty, I soak it for 30 mins and then try it again. Finely slice and eat, an amazing simple cure which produces a mighty fine .

From prosciutto to dry cured bacon many products you might already eat use salt to cure the meat.

For low & slow barbecue smoking dry rubs are often used. Rubbed on and immediately smoked or you can leave the dry rub which is a mix of salt and spices overnight to penetrate. For the salt to penetrate into the meat, depending on the size and density of the meat the curing may only happen near the surface.

Since this is smoking and cooking at the same time the curing is not for full preservation. It’s about getting it soft, cooked with good smoke flavor attached. When it takes 4 to 12 hours, the smoke will end up flavoring the food nicely.

This is a method I am very familiar with, it is used widely and dry cured products. Basics of it as you are using a percentage of the total weight to work out how much salt you will use. By doing this you might under or over insult the meat. So you can cure the meat and a bag that in the fridge for a longer period of time.

When I use a portable smoker, for fresh salmon or trout fillets. It’ll be primarily for hot smoking. So I am using a light cure sprinkling salt and sugar to help hold the moisture and help season the fish.

I just leave it overnight in the fridge and give uncovered it in the morning. A bit of drying to form the pellicle and then it’s ready to smoke.

It is an essential step in cold smoking. Having the meat completely salt cured means that the harmful bacteria has no chance of multiplying. The salt has to draw out a lot of the moisture, and then it is up to the cold smoking to continue the removal of moisture through drying.

The humidity level has a significant impact on dring and cold smoking. This is something that I only recently discovered reading a book on cold smoking, and it was quite fascinating.

Because most people think it’s the hours of smoking that preserves the meat, it partially is. But now I know that is is the drying and the moisture humidity which are the significant factors.

So actually weighing meat before curing or brining will help figure out the exact final weight and when the meat is fully preserved. If you want to do it the commercially accurate way.

Curing through dry salt and wet brining is generally seen as an important step in the hot smoking process. Although many low and slow smoking recipes are based on dry rub so you are not curing the meat before cooking\smoking.

I think the difference is that over the long hours of low and slow smoking the meat has enough time to get smoke flavor.

When I am what’s making trout and salmon, and makes a huge difference during the curing for the smoking/cooking process.

So for long-term meat storage salt can be really a key ingredient. Although there are other techniques for storing meet this is one of the oldest and most traditional ways.

Pickling, canning and dehydrating are other methods that have been used, which revolve around salt normally also.

One of the techniques I use for creating a lasting protein just uses – salt and vinegar to preserve. Jerky or Biltong are easy and last for some time in the wild.

I have even heard of the traditional South African Way many years ago. Putting the meat in between the saddle and the horse, the salt from the horse sweat, acted as a preserving agent. Don’t think I will try that one.

How do you Salt Cure Beef?

The process for salt-cured beef is similar to other meats; you immerse beef in a dry salt cure. Depending on the beef cut it may take more than a week to cure fully. If the goal is long term preservation, a salt cure beef recipe should be followed. Brining and smoking are different; this relates to the pastrami method.

Can you Table Salt for Cured Meat?

Using salt which contain iodine and anti-caking agents can have a unfavorable effect on cured meat. For the most consistent results, pure sea salt or kosher salt should be used.