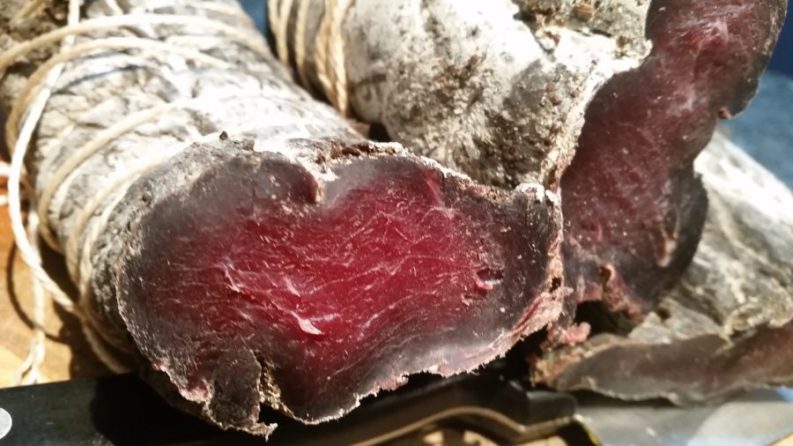 That one ingredient that unifies, salt specifically sea salt or kosher salt (nothing with additives or anti-caking agents – not iodized table salt ideally). But it’s not so much the I believe it more comes down to the craft and process. So let me introduce some of these methods below, hopefully you will get hooked too!

What are the Main Ingredients for Curing Meat?

So really for the above ‘dry curing ‘ cured meat like prosciutto, pancetta, dry-cured salami & coppa. Curing meat has quite a wide definition; some people think it’s only charcuterie or salumi. I like to think of it like any project which involves salting or brining the food and not always for preserving like hot smoking. If you want to check out the mega world of cured meats, I wrote a post researching 50 different kind, if you want to see the list check it out here.

So I’ll break down the different curing and smoking projects and some of the main ingredients I use as an overview.

Probably one of my favorite types of curing, definitely can be done at home quite easily. Once I got into it for a few years I decided to build myself a DIY curing chamber so that I could have a controlled environment to dry cure meet long-term.

In the most basic definition, dry curing meat involve salting and then drying the meat. Once the meat has dried to 65% of its starting weight it basically has become a type of jerky and you can eat dried meat without cooking. Remember this is a craft and art – so it does involve a decent level of understanding.

In saying that I have been doing it for over 20 years, and I can I have probably less a dozen ‘outcome’ that were desirable, mostly due to rushing the process and forgetting this is the definition of slow food.

This gets its own section since it really does the work for most meat curing. Depending on the desired outcome it inhibits meat, holds moisture or removes it.

It also helps form the dry pellicle protein layer on the outside of the meat so smoke gas/vapor can adhere to it more easily, is there anything salt can’t do!

know that white stuff on and other meat? That is good bacteria, penicillin actually. It protects the meat and lives a happy life, of penicillin is used widely in the medical arenas also (Halo-tolerant, can handle the good bacteria).

This is basically salt with the little tiny bit of sodium nitrite. This just makes sure the meat doesn’t grow bad bacteria. It’s a common ingredient in bacon you buy in the store. The Equilibrium Curing guidelines are to use 0.25% pink curing salt to the total weight of the meat that is being cured (per 2 pounds/1 kg of meat use 2.5 grams).

So as you can imagine, you’re dealing sometimes with less than a few grams depending on how much meat you curing. So accurate scales that get down to 1 or 2 decimal place, is what I find most useful.

Pink curing salt goes by many names due to all the different marketing involved with it. These include instant cure, prague powder & . Quite a few other too.

(Curing projects generally under 30 days, and projects like bacon that will be cooked)

No. 2 is used for long-term over 30 days dry curing projects which also includes salami. It has the addition of sodium nitrates over time it’s broken down into sodium nitrite. It works exactly the same way to keep the meat safe from bad bacteria.

Examples for Pink Curing Salt No. 2

Both these curing salts are pink, very bright pink so they don’t get confused with normal salt because they could make you very sick and should be kept well out of reach and the very safe place home.

If you want to check out more information about the difference between pink curing salt No. 1 and No. 2, check it out here.

Traditional these ingredients are used to cover exposed meat when making prosciutto or parma ham, this seals the exposed meat to prevent any bad bacteria inhibiting the meat.

Cold smoking meat is all about fully curing the meat and then drying it out both with smoke in a conducive to a point where it is preserved.

I definitely didn’t do cold smoking meats until I learned a lot about it since many people have concerns about the bacteria growth. Cold smoking products like cream easy and can be done in an hour, same with cold smoking cheese.

In Europe and the UK, cold smoking is very established both commercially and at home and there doesn’t seem to be the issues that some people have in the United States, like it’s just a process to learn. If you want o read a bit more of cold smoking, check it out here.

So definitely salt is the main ingredient for cold smoking.

Again of course salt is the main ingredient but dry-cured salami has a few other interesting bits and pieces.

What I have learned is to use a bacteria inoculation one common brand is . It comes in a variety of flavors, I think like cold smoking salami is something that you should try once you have done other simple curing projects.

Pink curing salt No. 2 is used because generally speaking a salami will be drying for more than 30 days. The meat is minced and which exposes it to the environment with all the invisible things floating around.

Which means there is a slightly higher risk. So inoculating meat and using nitrates & nitrites means makes the meat a lot safer. That is why it is considered an advanced at curing project.

In some States is all about just salt and pepper, but in contrast there are secret recipes for lathering a brisket or pork butt with stickiness then coating in sweet spices to produce the almighty bark.

If you making hot smoked bacon, you generally using salt, sugar pink curing salt No. 1. Which is Low & Slow also.

When I making hot smoked chicken, for instance, I will also be using salt, sugar, and pink curing salt No. 1 and brine for holding in moisture

So I define this as using direct heat to cook the meat, with wood in between for smoking. There is a rack that keeps the meat and wood apart slightly. Here is my portable smoker in action, great for camping and fishing also.

With the under an inch fish fillets above, they took only 4 hours brining, and 1 hour to form a pellicle form hot smoking for just 12 minutes.

Some of my most favorite protein snacks involved a little bit of meat curing.

When you look at something like jerky or South African biltong which is very similar. It is a super healthy high-protein very low carbohydrate, low salt & low sugar. Well, it should low sugar, but a lot of commercial jerky does contain quite a bit of sugar.

For the simplest version of South African style biltong which is incredibly tasty all you need is sea salt, mlt vinegar coriander seeds.

If you want a quick rundown on making simple jerky and biltong, check out this post here.

Other ingredients for Curing Meat

Just thought I’d mention some of the ingredients that match to certain cured meats that are favorites other than salt and sugar.

Pork always goes with sweetness so adding some maple syrup to things like bacon really does help enhance flavor.

Of done some experimenting with Asian style spices like allspice or this classic five spice blend.

It’s amazing what can work, I did a whiskey dry cured cold smoked bacon which turned out really good for a hunting trip.

Gravlax is classic cured meat dish, with salmon, it’s origins are from Scandinavia. But all you do is basically put the salmon and a tray of salt using the salt box method. Dill is the classic spice that’s used also.

You leave it for 24 hours take it out, thenslice and try it to check saltiness. You can easily just it in freshwater for 30 minutes if it’s too salty.

Thinly slice and enjoy, there is also a popular beetroot style gravlax that rocks.

Juniper berries, garlic, Rosemary and toasted black pepper are probably some of my most favorite flavors to peer up with didn’t red meat

When it comes to jerky or biltong other flavors from the classic I like to use are smoked paprika, Chile, cumin and garlic.

What is Meat Cure Made Of?

Meat cure can mean several things. Generally, pink curing salt is included and for meat cure, there are two types one for short-term under 30 days of curing, this is for cured bacon. The other main meat cure is designed to limit microbes so the meat can be cured for longer than 30 days.