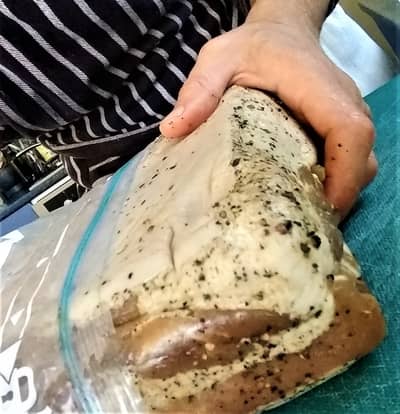 Salt pork definitely has some similarities to bacon, and there are cross overs for how it’s made and how it tastes. But there are a few important differences which are, mainly the salt content and that bacon has had an application of smoke (whether cooked style bacon or cold-smoked bacon).

Salt pork is definitely a cured meat and has a long history through the ages as a staple ration during war times for instance. I guess the modern type we get is not as super salty since that’s what would have made it super-duper preserved.

Being a cured meat, I had to explore it in detail recently – it’s simple and actually the same as salt fish or salt beef (saturated in salt for flavor and preserving).

It’s definitely one of the easiest meats to cure, mainly because you keep the pieces of meat whole and you’re applying a large amount of salt which really nukes the ability for unwanted bacteria to grow.

So I want to cover artisan and commercial salt pork, to give you an idea of the taste and also see how you can make your own if you’re interested.

The taste of salt pork, once salt pork has been prepared by soaking out excessive salt. It is a intense pork flavor without the smoke aspect. Frying or stewing salt pork also leads to a different taste. Salt pork tastes a small amount like bacon.

When you fry salt pork, you are also rendering and removing the fat out of it. And just like roasting something in the oven you are intensifying the flavor due to the loss of moisture.

The porky and salty flavors come through quite strong so I tend to add it into beans, stews or soups – to give it another flavor dimension.

If you’re into this salt pork thing, here’s is a bit more of a breakdown of what I know. Also here is another link to a post I wrote about salt pork and substitutes.

Another term that is used quite often is white bacon, or in some places they call it green bacon. Both of these basically are to highlight it’s salt-cured ‘bacon’ that hasn’t been smoked.

Most of the commercial bacon you buy will be salt-cured (using a dry cure or wet salt brine) and then cold smoked, cold smoking is a form traditionally of drying the meat with smoke below a certain temperature so that it is protected from bacteria and fungal things due to the smoke, whilst also adding, of course, a bit of pleasurable flavor.

You might do this at home and any guys who are making bacon at home aren’t often cold smoking. They are cooking bacon at a low temperature, and in a kind of low & slow smoking way, very common in the US to do this way.

Whilst, in Europe and the UK there is a lot more cold-smoked bacon happening in the backyard. In Asia, Africa or Oceania (Cold and Hot Smoked down there) who knows!

If you want more detail on the difference between cold smoking vs hot smoking I wrote bout it here.

If you want more info on cold smoking, here is a full post.

Difference Between Salt Pork and Bacon

Bacon has a level of salt that is enough to give it some level of preserving, the way that I do meat curing is with equilibrium curing which is a salt percentage to the total weight of the meat when you start.

When I make salt pork I use at least 10-12% salt (percentage of weight vs the total weight of the meat), or the other method is to layer salt pork and salt otherwise known as the saturation or saltbox method.

Then you pretty much just wait a certain amount of days for the salt to fully cure the pork.

Traditionally sugar wasn’t really used on salt pork, but these days people like to add it. Not really a necessary ingredient even though sugar does provide some levels of preserving effect, people are pretty hooked on that sweet stuff these days.

And lastly of course pretty much all bacon as smoked, nowadays mainly for flavor. Some of my favorite woods are apple, peach, using grapevines that have been trimmed.

Difference Between Salt Pork and Pancetta

Pancetta is a pork belly Italian dry-cured meat I love to make.

Pancetta definitely is more of a craft to make, the idea is your drying it slightly and carefully which normally takes a few months.

So you a much more intense flavor and the subtle herbs and spices come through. It’s dried to the point where it can be eaten (ie at least 35%). There is craft to this and half the reason I started this website.

And then there are the pronounced spices that are traditionally used, the months and months I spent in Italy highlighted the many variations of the recipe, although often incredibly subtle as well.

And it isn’t that hard, and you can achieve results in a normal fridge, for a bit more insight, check out this post I wrote on dry-curing meat in a regular kitchen fridge.

Salt pork is more of you’re rough and ready style curing and completely saturated with salt to preserve it. Pancetta has that 2- 3% salt level and is dry-cured below 35% weight loss so that it is safe to consume in a dried form without cooking. Or you can use the old saturation method to make pancetta, placing it in salt and waiting a certain amount of days.

Don’t get me wrong, they are both awesome !

Preparing Salt Pork and Rinsing it Before Use

It’s really important, and sometimes guys in this community forget that salt pork needs to be soaked or blanched before it is used.

You basically have to leach out some of the salt to make it palatable, I routs it’s just way too salty!

Can Pork Belly Be a Substitute for Salt Pork?

No, pork belly is just a raw uncured piece of meat. Whilst salt pork has been cured and therefore has a more intense flavor.

Purely opinion, but from I have have learned talking to many a butcher is that the commerical pork will generally be intensively farmed. So considering with any meat curing you want quality in the meat first and forremost.

Knowing where that porky pig came from is kinda important.

Better off, get some decent pig, and cure your own.

What do I Need to Make Salt Pork

Just think kind of streaky bacon (pork belly) that is around that belly area although most salt pork is 70 to 90% fat depending on the breed and feed.

Another reason for using belly meat is that many porky pigs have a lot of fat, and fat doesn’t lose weight shrink as much as the meat does.

But really you can really make salt pork out of any boneless piece of pork, but traditionally it’s always been the pork belly.

Okay – so pork number 1 ingredient and number 2 pure sea salt with no added bits and pieces.

Sometimes you get an anti-caking agent or other preservatives added to salt, I’ve found that these can change the flavor of the meat in unpleasant ways. So you don’t want any iodized or other additives if you making your own.

How is Salt Pork Made

So I do it in different ways either adding salt above and below the chunk of pork in layers.

And then just leave it in the fridge for a week , this is enough to completely get salt cure penetration )1-1.5″ pork thickness.

Or if you don’t want to be as wasteful you can use a percentage of salt to the weight of the meat.

IE, I’ll use metric instead of imperial it’s easier to calculate.

Doing this at fridge temperature is good to minimize unwanted bacteria and bugs.

2 days per pound of meat is a good general rule for the curing time, or 3 days for super thick meat.

How Long Does Salt Pork Last?

I haven’t had issues using salt pork up to one year later, but I do like to keep it in the fridge for a safer lower temperature. I always give is a week or so submersed in salt for a longer cure.

I just wrap it in a tea towel or muslin and then chop off chunks when I need it.

Here is the link to a bit of a rundown on salt pork and how to make it I did. Plus, it mentions the other ingredients you could you to spice it up the way you want to. Like the below:

Here is a slow cooked Boston Bean Salt Pork Recipe worth a go.

Seafood chowder, especially a classic New England Clam Chowder is another great recipe for salt pork. I like milk, some like to use cream for extra richness!