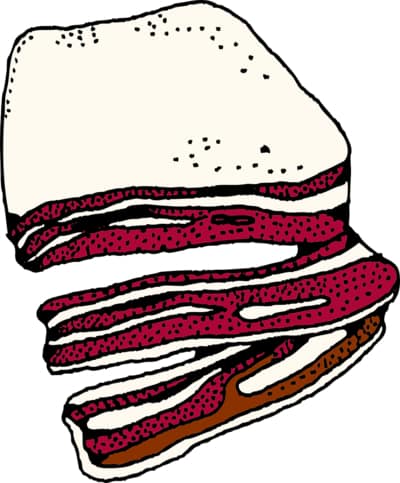 Refrigerating salt pork depends on the salt pork you have, it’s sometimes hard to figure out how it was made so I will dive into what I have learned about that too.

I mean the safest bet you can have for whether or not you should keep it in the fridge, of course, is to look at the expiry or best before date.

But a lot do salt pork sold, doesn’t have any instructions on storage, if in doubt just keep it in the fridge.

A lot of guys asked the question about whether it’s going to last without refrigeration. Mine does, but I make it myself!

Whether it has been salted or brined for that matter may also effect its shelf life.

Whenever I get pork belly I end up either making dry cured pancetta Italian style or cold smoking it and making my dry cured bacon.

And if it doesn’t go down those routes, it might be some low & slow barbecue smoked ribs.

Since this website is all about meat curing it has got me very interested and salt pork.

Does Salt Pork Need to be Refrigerated?

There is salt pork variation in how it is made and prepared. Ideally, it should be kept in the fridge. It can be hung in a cool moderate temperature for months. Depending on how saturated it is with salt, this will make a large difference in how long it lasts.

Now if you want a little more info, being a curing meat website I will go through some of the ins and outs I know about salt pork to give you a better understanding – there is a serious lack of info out there!

Different Ways Salt Pork is Made – Brine vs Dry Cure

Many of the commercially made salt pork’s use what’s called a brining method. This basically involves heavily salted water with the pork submerged and it for a length of time.

As opposed to dry-cured salt pork which is encasing or layering the pork in salt to draw the moisture out. Whenever I have done brining vs. dry curing projects, personally I find dry curing has a more intense flavor especially when foods and spices added. This happens when I make salt pork too.

But generally speaking, there aren’t many spices and herbs added to salt pork unless you making your own.

Many commercially made salt pork’s may have additions like all sorts of extra preservatives and what have you.

I just like to use salt pork with a few spices (like Juniper berries, cracked pepper, cumin, paptrika, garlic powder).

This is different when I’m making things that have a slightly higher risk of exposure to bacteria like salami. For instance when you making dry-cured salami and I like to use nitrates/nitrites to make sure there is less chance of something growing inside it, add color and flavor.

But for salt pork, I’m not a big fan of cooking nitrates, since all the research I’ve read suggests this ain’t good. You have to do your own googling about that and make your own mind up.

So really the only difference between say pancetta or dry-cured bacon and salt pork, salt beef or even salt fish. It’s the level of salt used, to give you an idea, for making bacon I would use 2.5% salt to the weight of the meat.

Salt pork that uses at least 10% more like 12% plus using what’s called an equilibrium method of curing. But often with salt pork it’s called the saturation or salt box method which is covering it completely and salt. TO max out the salt penetration.

The salt inhibits the meat and shuts down water activity, bacteria that spoils meat needs that moisture, so it is basically starved.

If you want to read a bit more about the basics of curing meat a home, check out this post here I wrote.

Pork back fat, belly or side of the pig that has a lot of fat on it. That’s what is generally used for salt pork.

When you dry out the meat, more specifically with the dry curing side of it I have done a lot of. I always notice that the fat doesn’t shrink as much as the meat.

Got a theory that salt pork was used because of the beneficial instant energy that saturated fat has. There’s some great old stories I’ve read about the world being explored and conquered fueled by salt pork.

Definitely when I do hunting in the wild have a friend who’s a little bit obsessed with having some incredibly fatty food for that instant energy (Big Pork Chops on the first night).

Discovering the uncharted world needed a lot of energy so that fat/energy was such an important component. A lot harder to discover the world on a salad or another form of rabbit food (I do like salad FYI).

These are the ones that I’m familiar with, the native American Indian style pemmican is mainly a mixture of dried fat and fruit. Kind of meat candy bar which was used as a ration survival food for the indigenous people.

Jerky is a fully dried meat snack many of you are familiar with. It has a dryness, but the trick is to dry out with enough salt that it’s palatable to taste.

Biltong can be very similar in the “dry” version of it to jerky, but the South African style biltong also is done in a quite similar to dry cured meats like bresaola or Lonza. Which has some moisture still in it.

An acid like vinegar which is ‘breaking down’ the protein cells type effect.

Think like Ceviche? People think its ‘cooking’ with acid, but from what I have read that isn’t quite right.

Using the acidity of vinegar normally malt vinegar and the power of salt, traditional biltong is made up of these two ingredients, oh and coriander.

Salt pork can ben dried in the fridge or in a cooler kind of wintry climate that basically is near fridge type temperature. Cellars are often used with some guys in the community.

Firstly this old school vid has one method.

Here is one, for a lighter salting – with you WOULD keep in the fridge

Soaking Salt Pork Before Use

There are a few different methods and approaches when it comes to this. I’ve found a minimum of two hours soaking and freshwater just left on the kitchen bench. But you may need to change that water once, twice or three times.

You can always just check by slicing off a little bit and frying it up to check the saltiness and the flavor. Some really heavily salted bits of pork you may need to change water up for up to 24 hours to leach out the salt.

The other option is to do parboiling, basically just simmering the pork but it depends on the recipe that you are doing. I found this to be faster, but then I’d be using the salt pork for a stew or another long slow cooking dish.