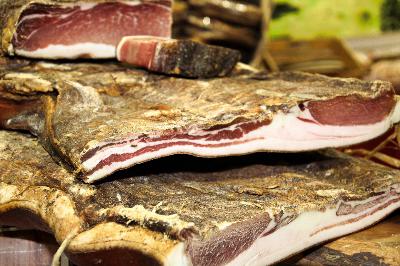 Adding curing salt to your bacon is one of those things that many new meat curers ask.

It’s also a question that often comes up here on my blog, so I thought I would share many years of research and give you some facts about it.

I’ll go into it, how I do it and how I approach it.

I have produced bacon for about 20 years. During that time I’ve experimented with different aspects of dry curing, cold smoking, or hot smoking and cooking the bacon in various ways.

So let me give you a nice short answer and then go into more detail.

Do I Need to add Curing Salt to Bacon? It is a personal preference, some like to add it for more protection from botulism. Others choose not to because at high heat cooking nitrites can turn into nitrosamines.

I have found a school of thought that has developed, especially in America & across Europe, where pink curing salt is used on anything that is salt-cured or dry-cured.

This includes dry cured or wet brined types of curing.

This rule applies to most commercial and home producers for cured meats.

You would use 2.5 g per 1000 grams of meat – this is in addition to the main sea salt that is used as part of the recipe.

If you want more information on the basics of curing using salt, here is a beginner’s post to give you some more details.

When I am curing meat I’m using plain salt with no additives or anti-caking agents basically just sea salt.

Curing salts are known by many different brands and names such as:

There are others I haven’t used, with different nitrate/nitrites to salt ratios, for example: Mortons Curing Salts, Canadian or European alternatives .

Often you will hear (and you also read on the internet) pink curing salt helps to create that pinkish color and porky flavor and protect the meat from botulism.

Research into Nitrates and Nitrosamines

Science Based Article on this

“It’s not so much nitrates/nitrites per se [that are carcinogenic], but the way they are cooked and their local environment that are an important factor,”

BBC News – The Truth about Nitrates in Your Food

Here is a more entertaining but informative read about botulism – a Doctor in Boston wrote this piece.

In their normal state, nitrates are pretty harmless. When we eat them, the bacteria in our mouths (and yes, we all have it), converts some of the nitrates to nitrites, and they’re a little different. Once they get to the stomach, that’s when reactions are kick-started by the acid there, and it’s when there’s the chance they’re going to turn into something carcinogenic. That happens when they’re in the presence of another set of compounds called amines. They form nitrosamines, and those nitrosamines also form in foods when they’re subjected to cooking at extremely high temperatures, like what happens in that bacon. Bummer.

Mashed.com – The Truth about Cured Meats

So her is a breakdown of what Pink Curing Salt contains:

What do I do With my Cured Meat

I’ve given information and facts that I’ve learned over the years. Now I will tell you what I do when I cure bacon.

I have developed a recipe that I include in my meat curing course, this includes salt and spices without any form of nitrates or nitrites.

This is because I like to cook my bacon until it’s crispy and generally with over 350°F heat. To avoid these issues with carcinogens, I don’t use pink curing salt or other nitrates/nitrites.

Using whole muscle meat doesn’t expose as much area to the environment, I believe it is lower risks to unwanted bacteria. Also, cold smoking has anti fungal and antibacterial properties in the smoke vapor.

For all the other types of whole muscle meat curing such as braesola, pancetta etc.

I use salt and spices without nitrates are nitrites for the same reasons.

I have some recipes for cold-smoked dry-cured salami from Eastern Europe which has been translated from Hungarian.

As many of you guys know winter in Eastern Europe is quite chilly, this means lower temperatures & therefore fewer risks of bacterial growth.

What is interesting about this traditional recipe, is that it either can be then hung and dried so that it loses over 30% weight loss and is therefore deemed dry enough to be eaten as dry-cured salami.

Or, you can cook the salami and eat it as a regular sausage.

In terms of equilibrium curing, which is the master method that I use for calculating curing. It is based on 2% salt to the weight of the meat.

When I place ham in a brine for 10 to 30 days depending on the size of it, again, I’m using equilibrium brining.

Then the ham is often smoked and cooked otherwise known as hot smoking at the same time and with direct heat. As I will be cooking the meat below 350°F, I use pink curing salt number 1 at the widely accepted ratio.

The craft of curing meat is at times a complex and a curious hobby.

But once you get the the foundations and understand the theory, it all starts to fall into place. It’s second nature making thing like bacon regularly for me.

And getting consistent outcomes with the right techniques happens often.

Please go through the links above to the numerous articles above.