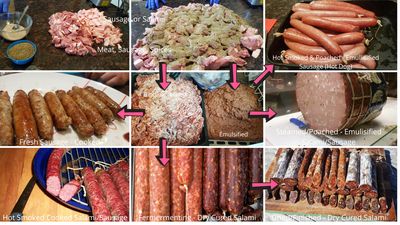 The difference between sausages and salami comes down to how extended the process is, in essence, all salami were sausages at some point during the process.

To really explain this properly, I am going to define what sausages are, as well as salami. To give some insight into the subtle and not-so-subtle variations.

I have been making, crafting, and eating sausages for nearly 25 years. Various types of salami have also been made at home for over 10 years.

Having this website all about cured meats, salami and sausages has given me tremendous insight into the many variations of sausage and salami worldwide.

I shall also elaborate on the confusing area in between some interpretations of what is a sausage across the world.

All salami, are sausages at the early stages of the process. Salami is then either hot smoked, fermented or potentially dried to finish the process. Fresh sausage is minced meat and fat, with salt and spices stuffed into a natural or synthetic casing.

To help explain this better, here is a diagram/infographic that shows the different processes and examples of sausages and salami.

Difference Between Sausage and Salami in Detail

First a definition of each will help showcase the differences in both of these meat products.

In a subtle way, you could say the sausages which are fresh meat raw need to be cooked.

There is a grey area that the Germans call Rohwurst, which is minced, stuffed meat. Which is then fermented and cold smoked. It’s a spreadable meat product, like a pate – but not emulsified or doesn’t have organ/offal-based products.

If it’s spreadable is it a pate?

Or, if it is stuffed into a casing – does that make it a sausage

As you can see, it is challenging to define this as a sausage. Also, there is a spreadable fermented dried salami called Nduja, a Calabrian, Italian spicy spreadable salami (incredible, if it contains the REAL pepperoncini chili!).

Try and categorize that!

Whilst salami has several variations it is finished by cooking (with smoke) or dried to preserve and intensify the flavor.

What is a Sausage

Sausages are minced meat and fat, mixed with salt and spices. We shall use the term sausage. For the type that is fresh with raw meat in it, it is then either poached, grilled, or fried until it has reached a safe international temperature to eat.

Yes, it is a hamburger pattie stuffed into a casing to make a long-shaped product that is often cooked.

However, in many Eastern and Central parts of Europe, a sausage is interchangeable with salami. A salami (let’s say fermented and dried) is a sausage during the process of production.

However, for my interpretation, we shall use sausage for a raw sausage that is to be cooked, and is often stuffed into a casing. However, there are ‘sausages’ that do not use casings, like the Montenegrian Cevapi.

Below I have given some examples of sausages, however again certain types of sausages are ‘cooked’ such as blood, liver, or headcheese sausages. These are often ‘poached’ in simmering water until the meat/offal is cooked to a safe temperature!

Emulsified sausages, again are the same – they are ground very fine until they have a uniform meat texture (think hot dog or frankfurter). Sometimes ice or ice water is added to help this process of emulsification (the extraction of myosin which is in the meat and helps bind the uniform meat texture together).

Or it is often simmered, just to reheat it.

Not we can move into some ‘hard to define’ styles of sausage, mentioned above.

Serbian Cevpacici – a Croatian, Montengraian, Bosnian style of ‘sausage. I ate these whilst traveling in the area, and also bought them from butchers.

Basically meat, salt, pepper, and garlic in a rectangular shape like fresh sausage, without a casing! Of course, there are many variations. You can also add some ‘spring’ lightness to the meat with the addition of baking soda *hack or trick.

Another way to describe this would be a long rectangular meat patty!

I still haven’t decided if baloney or mortadella (similar techniques, but quality can vary a lot between these products whether they are homemade or commercial).

Is it sausage or salami? It has a casing, consists of meat and spices – and it is often steamed or simmered as the last stage of the process. It’s produced in a sausage form but is a paste or emulsified style of meat.

Let’s stick with sausage at this stage.

Products the Cross Over Between Being Fresh Sausage and Salami

Basically a fresh sausage, and it then indirectly heat cooked with smoke around it, this can be done at lower temperatures to begin with, then eventually the ‘internal cooked’ temperature of the meat will be reached by increased temperatures.

The idea often with a hot smoked salami, with meat and fat separated is to slowly cook/smoke the meat so that the fat does not melt. Which looks nice when the meat is sliced!

Also, the emulsified sausage like a Kransky is finished the same way with smoke/heat until it’s cooked.

When I finely grind meat or add some ice or water to it. Then it becomes a ‘paste-like product.

An emulsion is the same as when you try and bind oil to an egg when making mayonnaise for example.

Ready to Consume or Not

If the Sausage/Salami is cooked until a safe international temperature is met, it’s of course ready to eat.

If it is fermented or fermented and dried – after it is stuffed it is not ready to eat.

(Apart from spreadable mettwurst or rohwurst style products, which are raw spreadable meats, but with salt and spices to flavor it)

Since it has different ingredients which are designed for weight loss/drying until the salami has lost at least 30% or has been fermented/acidified until the unwanted bacteria has been suppressed.

For commercial salami, this rapid acidification is done fast, like 2-3 days.

For homemade dry cured salami, even a 1″ (25mm) salami will take 30 days to dry out until 30%+ weight loss has been made. For large-diameter hard/dry cured salami like this, it could take 4-6 months! The real dry cured salami! (and one of the most complex charcuterie/dry cured meat projects to master!).

In some ways, salami of the dry-cured or hard salami kind starts off the same as a sausage. However, the ingredients can vary slightly if an inoculated started culture is used to change the pH acidity level (basically another type of protection/flavoring technique using the power of lactic acid).

But not all dry cured salamis have started culture inoculation. It is perceived as one of the methods of preservation to stop unwanted bacteria.

Salami is a hot smoked or dried minced meat product with salt and spices. Salami is either completed by cooking at low temperatures until meat is safe to consume or dried until a minimum of 30% weight loss has been achieved.

Most of the salami in the world is considered ‘hard’ or dry cured, this is about a density of meat and loss of water moisture. Which in turn, intensifies the flavor.

When starter cultures are used to ferment the salami after stuffing, this creates an acidic environment that unwanted bacteria do not like. It is also a reason why some styles of dry-cured/hard salami have a ‘tang’ or slight sourness to the taste.

From a commercial ‘dry cured’ salami perspective, instead of months to dry out properly a salami. Commercial producers use shortcuts, like an intense acidification process to drop the pH level quickly, to make the product faster to produce and sell.

These are often the cheapest salami in the supermarket that has a moistness to them, like this one:

I will break down salami into these categories:

Either this is cold smoked without starter cultures, common in Easter Europe. Cold Smoking is basically assisted preservation as well as drying at the same time.

Or Fermented with starter cultures and then dried out, to get to the point where unwanted bacteria cannot spoil the meat easily, which is a 30% minimum weight loss. Although, I prefer about 40% weight loss.

Fermentation Often But Not Always

Fermented or not, if not I tend to use cold smoke and salt as the main preservatives. Without the acidic addition.

I came across this style first, when my partner who is Slovak, translated a Hungarian recipe for me – Kohlbasa.

It was confusing because it was bought like a fresh sausage – which you can then grill/bbq until cooked through since it was raw meat. But she would then say, you can hang it up at 5-15°C temperature and dry it out like a dry cured salami!

It had 2% salt to the weight of the meat, which is the threshold for either a fresh sausage or enough salt for preservation/salami drying. I also cold-smoked the kielbasa, for 6-8 hours as per the recipe.

However, I have done some experiments making dry cured salami with and without starter cultures. As well as, adding red wine and leaving it out – I have found the pH dropped also with no starter culture or simple sugars (the good natural bacteria that produces the desired lactic acid, supposedly consumes dextrose easier than standard sugar).

Dry Curing, really just means you are using a dry cure without water (a brine) during the curing, and mixing stage of the salami making. After Curing, you are Drying – therefore dry cured meat!

Cured Dry Salami would be a more accurate way of describing it, but isn’t a common term, I just invented it!

Can be Cold Smoked or Not

Cold Smoking provides some anti-bacterial and anti-fungal properties to the meat/salami. It’s also a flavor that creates complexity.

Central and Eastern Europe, have many products with a focus on cold smoking – this also pertains to the climate.

When I have made hot smoked salami, it is often basically a sausage with some showcase fat that which has a larger diameter mincing. Everything is evenly dispersed and a well-mixed bind to get the meat tacky and achieve some extraction of the myosin from the meat.

The myosin is extracted by squishing and squashing the meat with salt.

As mentioned above, hot smoked salami is basically cooked with smoke around the meat from indirect heat until the internal meat temperature is reached.

A lot of salami bier sticks are produced in this way, although the commercial types are also fermented using acidity and smoke as ways to preserve and flavor them.

Pitina – a lump of dry cured salami, without a casing. Can be cold smoked as well, but isn’t compulsory. It is rolled in polenta, traditionally using Chamois in the region of Pordenone.