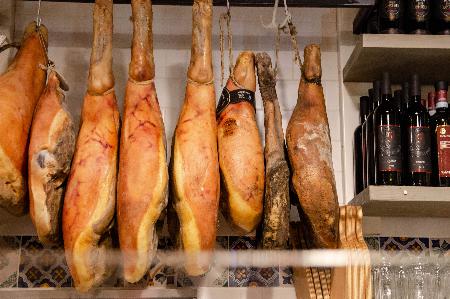 Depending on where you live in the world, you may or may not be used to the fine delicacy that is cured meats like prosciutto or other dry-cured meat.

But, if you are fortunate enough to have tried some before, then you may be looking to expand your repertoire and add in a few new types that you are unfamiliar with.

I’ve had a fascination with prosciutto and cured meats for over a decade. Hence the site!

So I wanted to highlight some other treats that are similar but different. These just about all fall into the ‘dry cured‘ meat category.

Cured meats similar to prosciutto differ in the ways in which they are prepared (spiced, cured), the area of the animal they are from, and the regional culture-infused within.

Legs of dry-cured ham in France, Croatia, Spain, Montenegro, China are all salt-cured and dried similar to Prosciutto.

Most use direct dry salt rubbed in, some use a salt brine – once cured they are hung – and sometimes smoked.

More often than not, the various parts of a pig are used for meat that is to be cured. Though you can cure beef and other meat sources in a similar manner, this article will focus on the more traditional pork-based meats – often in classic Italian called salumi.

Continue reading to learn more about various cured meats that are similar to prosciutto and most are considered the classic Italian cured ‘salumi’ meats.

What are Popular Cured Meats Similar to Prosciutto?

While some grocery stores carry a wide array of cured meats, others have very limited selections. This can be due to the region you are in, the size of the store, or other factors. However, if you cannot find the prosciutto that your recipe calls for, do not fret.

There are plenty of cured meats that are similar enough to prosciutto to call for a one-time replacement option, that’s what I’ll focus on. And, who knows, maybe a few of these will end up on your forever-list.

Coppa, or Capicola (US)/Capocollo (Italy), is a pork-based cured meat that is spiced to perfection before being sealed, cased, and left to cure for 6-months (or more).

Do note, however, that this meat has been found to be dry-smoked in some Italian regions rather than cured, though the curation process is what really gives it its historical flavor and appeal.

This cut of meat is from the upper shoulder/neck region of the pig and tends to be leaner than other types of cured meats, though it is fattier than the classic prosciutto.

You can find coppa/capicola/capocollo marketed in different ways depending on the region you are in. Generally, this is sold based on its “flavor” insinuated by the various herbs that were used in its preparation process.

For example, if cinnamon is common. Or, it could simply be sold as a “sweet” variety- more common in the US. Traditional coppa does not have sugar added.

Coppa/capicola/capocollo is sliced very thinly, though you will be able to see its bright red coloration and cream-colored fat marbling throughout. It is a great choice to substitute (or pair with) prosciutto on a charcuterie board for your upcoming social event.

Pancetta is a very popular cured meat that resembles the ever famous prosciutto. If you are unfamiliar with it, you might even mistake it for fancy bacon, but it is so much more.

This cured meat option comes with its own history, flavor, and place on your charcuterie board.

Pancetta is known for its salty flavor, though you will notice hints of pepper and other common spices infused as well. It is commonly used throughout the world, though its history boasts of Italian origins- common with many cured types of meat.

Similar to other types of cured meat, pancetta comes from the pig’s underbelly. You will notice that pancetta has a wholesome ratio of fat and meat which is what gives this cured meat option such a priced place in the industry = fat is flavor.

Often, you will find pancetta cut into long, thin slices resembling bacon- which is what likely leads to the confusion of this meat with bacon itself.

When placed on a charcuterie board (or another serving dish), it is most common to find this meat wrapped in a circle resembling a croissant or donut depending on the host’s preference.

Another option for pancetta’s cut is to be cubed and packaged.

This popular option is what most pancetta connoisseurs will use to toss into a dish rather than eating it alone. Pancetta is probably one of the most commonly substituted cured meats when prosciutto is unavailable, but it has a place of its own in many popular vegetable and pasta dishes of its own.

Guanciale is a popular cured meat that is similar to prosciutto in its preparation and curation processes. Additionally, this cured meat option is a staple in common dishes like carbonara and other Italian pasta.

Not surprisingly, then, will you come to know that this history of guanciale is also Italian. Perhaps this is why it has become so popular in the use of Italian meaty pasta dishes. Naturally, its flavors are a large part of this, too.

Guanciale is one of the fattiest cured meats that is included on this list.

You will likely find that it “cooks down” a considerable amount, too, since it is so fatty and the meaty portions will be much slimmer. But the flavor that this meat option adds to your dishes cannot be topped by many other options. It can be eaten without cooking too.

This is a huge category, many are dry-cured but salami is also fermented. It falls under a dry-cured banner but is distant to prosciutto. The tangy flavor often comes from mold cultures that create various complex flavors. This more related to slow fermentation types of cultures.

Salami is another popular cured meat that is similar to prosciutto, though the two are not often mistaken for one another. Their similarities are attributed to their curation process as well as the flavor which they boast.

Salami comes, similar to others, from the Italian region, but it is often thought to be the same thing as salumi. And though this can be true, that the two resemble one another, they do carry distinctive names for a reason.

Regarding how it is served, salami is a cured meat that is often served in links and then chopped or cut into slices. This is what gives it such functionality when serving. The small “rounds” that come from the link itself fit perfectly onto common wafers or crackers. This, paired with a favorite type of cheese and wine can make for an excellent and refined snack.

Interestingly, salami is a meat that is ground up and can include portions of any portion of the pig or other red meat.

This is yet another reason that it became so popular in the first place because butchers and cooks could use the entirety of the animal that remained.

However, this is not just thrown together while hoping for the best. Instead, the meat is ground and then spiced with a wide array of spices depending on the desired flavor options.

After the salami has been prepared, it is sealed in a link with its ends twisted off. Upon the time for serving it, the link is often chopped up and the small rounds are displayed on the serving platter. Be sure to watch out for various flavor options such as “mild”, “sweet”, “Picante” (hot), and more. Salami comes in over a hundred maybe thousands of flavor varieties,

Not just Italian but also there are many Asian, Scandinavian types etc..

Mortadella falls under the salami category but is considered its own specialty and is another delicious cured meat similar to prosciutto. If you simply take this meat by its appearance, you will probably notice (quickly) that this cured meat resembles the lighter, pink coloration of bologna.

Not surprisingly, this is another meat that comes from the Italian region- and if you are familiar with Bologna, Italy, then it is probably very apparent why. However, this meat is consumed throughout the world, though it can be a bit harder to find than a few other more commonly known cured meat options.

Interestingly, mortadella takes on more uncommon spice offerings which give it a unique flavor- providing enough intrigue for someone who is not familiar with this type of meat option. You can likely even find a flavoring option that was prepared with pistachio as one of the top spices used in its preparation.

Mortadella comes from the fatty back of the pig, though it can also stem from other muscle and fat regions. It is served in slices, generally round, and looks more “spotted” with the fat than it does marbled. This, along with the spices that accompany it, is enough to make it a top contender for many people’s consumption offerings.

Similar to other types of salami, mortadella is made (most traditionally) through a grinding process with a mortar. This is yet another reason it became so popular with butchers centuries ago as the waste was not forgotten and could be used to create a delicious option.

This is a type of emulifised salami where fat and meat is blended, it can be done in a quality manner or cheap and cheerful – what i call the mystery meat type luncheon or spam.

Speck is another cured meat similar to prosciutto, though it is usually sliced even thinner- but it can be served in the same way. This cured meat option also has Italian and European roots.

The cut of meat that speck comes from is most often its hind legs which usually provides it with a more meaty portion compared to the fat that is attached. Speck is also unique in its curation process. Not only is it prepared with loads of unique spices that add their own flavor to this option, but it is a commonly smoked meat, too. Usually, it will be hung out for several months to increase the “soaking in” of all of the flavors.

Though it is not as popular (or well-known) as prosciutto, it is very commonly used in a wide array of dishes. Because it is so thinly cut, it is easy for most chefs to use it in common offerings, especially since its smoky flavor and hefty amounts of spices can offer such a unique twist on otherwise common dishes that you may grow tired of.