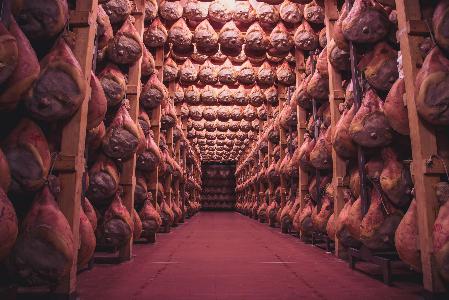 If you love dipping into the charcuterie board, there’s no doubt that you’re familiar with salami and ham.

Both have so many variations! Since I’ve been passionate about this meat curing topic for decades, I’ve come across a truckload of style.

With both often being pork products, they are sometimes used interchangeably.

Both add fat and flavor to a dish and are a treat to eat all on their own.

But what’s the difference between them?

Ham is primarily the rear leg of the pig, it can be dry-cured, wet brined, hot smoked or cold smoked. Whilst salami is a ground meat sausage that is either cooked and smoked or dried carefully to create dry-cured salami.

Ham is a type of pork that comes from the hind leg of a hog, while salami may have different meats, including pork, beef, lamb, and poultry.

I’ve made salami from wild venison quite a lot, always need to add 20% minimum fat for a dry-cured salami, it creates the balance of flavors and mouthfeels that you need for a complete product.

With such distinct taste differences, there’s more than just where the meat comes from that sets ham and salami apart. This article will give you a clear idea of what both ham and salami are, so you know how to use them and when.

Dry-cured salami is a cured sausage that originated in Italian cuisine, it’s dried carefully to produce flavor and preserve it for shelf life or a cooked/hot smoked product that reaches a cooked internal temperature.

Traditionally, it is made with pork mainly. But may also have venison, veal, beef, and occasionally poultry.

Cheap supermarket salami is a mixture of meats and also instead of using traditional drying, due to commercial rationale, they pump acidic compounds into the meat to change the pH level. Unwanted bacteria don’t like high acidic environments.

Traditional salami is often fermented then dried, the fermentation stage that lasts 1-3 days create a higher pH level. Vinegar is also used for this effect.

This meat is combined in a casing with various ingredients to make its shape and to create the distinct flavor characteristic of salami. Spices are key too!

Salt, vinegar, pepper, minced fat, herbs, and garlic are the most common ingredients to create its flavor.

After being blended with the meat and formed, the sausage goes through a fermentation phase before being air-dried to make the cured sausage.

Dry-cured salamis can be kept outside the fridge because they have been dried to a point where minimal bacterial growth can exist inside the salami.

Dry-cured salamis are made by introducing a starter culture to change the pH or the acidic environment in the meat.  This helps to control unwanted bacteria when making salami. Salt, spices, acidity, and cold smoking are typical methods that are used. Over a slow drying process, the acidity mellows out.

What Does pH Have to Do with Salami?

Fermented dry-cured sausages, such as salami, are a type of chopped or ground pork product that has attained a pH of 5.3 or below. Salami also undergoes a drying/aging process to remove 35-50% of the moisture.

When producing salami, one of the things that must be addressed is the pH of the salami. Only meat with a low pH value is acceptable to produce fresh salami.

The pH must be less than 5.3, regardless of the sort of salami you intend to make. This is regarded as the safe zone. A low pH prevents the growth of unwanted microorganisms.

Consequently, good lacto-bacteria and microorganisms have a chance to thrive, improving the flavor and preserving qualities.

How is Ham Different from Salami?

Ham is a popular cut of meat made from the leg of a hog.

Ham is a whole muscle that can be salted and dried or using a salt/water brine mixture – wet cured then cooked/smoked.

The flavor and texture we associate with ham are not achieved until the ham is cured (brined) and often cooked by smoking.

You have probably seen both uncured and cured ham when shopping for ham.

Dry Cured ham has been through a curing procedure meant to keep the meat preserved without the need for refrigeration.

What is Cured Ham?

Unless otherwise specified, the ham at your local grocery shop is most likely cured ham. Because any ham product labeled as cured, baked, or smoked is virtually pre-cooked and safe to ingest, cured ham is a popular grocery store and deli counter item.

When curing ham, producers can choose between dry curing and wet curing. When buying cured ham, it is critical to understand if the ham you purchase is dry-cured or wet-cured, as this will affect how you prepare, serve, and preserve the meat.

Dry curing begins with washing the raw ham, then putting it in salt and gently pressing it to drain any liquid.  Following this, the spices and seasonings are applied to the ham.

The ham is then dried in a dark, temperature-controlled environment. Depending on the sort of ham being dry-cured, the ham might be hung for months or even years to develop its tastes.

When the drying phase is complete, the dry-cured ham is typically ready to eat. Dry-cured hams can be kept for a long period since the moisture that would ordinarily promote germs has been removed.

Traditionally across many European countries, dry curing was a tool to preserve the harvesting of pigs or other animals. And allowing dry-cured meat to hang unrefrigerated over the colder months of the year.

When ham goes through the wet curing process, it is brined before being thoroughly cooked in an oven or a smoker—brining includes soaking the meat in a brine for several days, enabling the ham to absorb the brine’s tastes and components, such as:

Wet-cured ham is typically cooked during the preparation or after a brief maturing time. Smoking is very popular since it improves the ham’s preservation and taste.

Wet Cured and Smoked/Cooked hams are ready for consumption. You may eat sliced ham cold directly from the box if you buy it at the deli counter.

What is Smoked Ham?

Same as the above pretty much.

Smoked ham is cured with salt and spices before being cooked over a slow and constant fire for varying amounts of time.

The smoking is done in a chamber known as a kiln. But I’ve used gas grills, kettle, drums, smokehouses, and wine barrels for this, heat and smoke are controlled.

Smoking kilns are constructed in several styles. They can take the form of masonry chimneys or stainless-steel drums. Racks or hooks can be used to secure the inside. The fuel is placed at the bottom and covered with a perforated plate, allowing smoke to pass through to the ham.

Both ham and salami are frequently featured on charcuterie boards and various platters. While each one adds a saltiness that contrasts well with other food items, it’s good to know the difference between them so you know more about that delicious cured food you’re having!

A few decades of passion around the topic and: