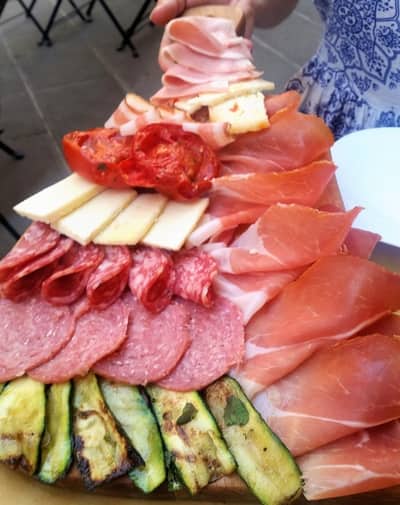 So how does this thing called charcuterie work, this is something that gets asked often around here. Why are the main reasons why it’s different from fresh meat? You’ve come to the right place, I’ve been passionate about charcuterie for decades and it still fascinates me so I will give you a quick answer and then dive into a bit more charcuterie detail.

There really are two main types of dry-cured meats that are part of charcuterie so will explain both of these, and give an overview of how charcuterie is made, and a little bit about what it’s all about.

And definitely, when it comes to charcuterie boards, the main attraction is always the charcuterie dry-cured meats that are selected.

How Does Charcuterie Work? Dry Cured Meats have salt, spices & preservatives added to the meat so that they lose weight and it’s hard for bad bacteria to survive. Once the dry-cured charcuterie has lost at least 35% of its weight, it is considered stable. This is how meat was preserved before refrigeration.

Yeah, I know pretty crazy, but this technique goes back nearly 2000 years, during Roman Times there is evidence that pork and salt or put together using the same techniques that are used today to produce dry-cured charcuterie (Parma Ham is the kingpin of dry-cured meats, and made the same way as the Romans!). This is otherwise known in Italy as the Salumi category which I’ll talk about more below.

I have been lucky enough to see charcuterie and dry-cured meat produced in various ways all across the world. But when you break it all down it comes back to the same important ingredient, sea salt.

Charcuterie – Types & How Its Made

Basically, the salt inhibits the meat and draws out some of the moisture. It also creates an environment inside the meat that isn’t very pleasant for bad bacteria that usually spoils fresh meat. The biggest challenge, especially when you’re home curing meat, is to put salt on it to dry-cure and preserve – without it getting too salty. There are some useful tools nowadays for this I can share with you.

Luckily, with the modern development of dry-cured charcuterie, precision can be had and we can you to choose the level of saltiness whether it’s dry curing charcuterie or in the other popular method using a wet salt brine solution which achieves the same preserving effects.

So let’s get into a bit of detail about the two main types of dry-cured charcuterie which are whole muscle “salumi” and dry-cured “salami” (I know they sound very similar).

Charcuterie used to be traditionally defined as a French-style which included some dry-cured salami, rillettes, pates, and certain products when using animal offal (like Andouillette sausage). But nowadays the modern interpretation of charcuterie (especially with the marketing of charcuterie boards), is really about dry-cured meats that you put on an antipasti or meat and cheese platter (meat and cheese platters are what they were called in the 1980s quite often).

Antipasti is a classic Italian style of charcuterie dry-cured meat with a fine selection of cheeses typically.

The Highlight is Always The Charcuterie Dry Cured Meat

I’m sure you’re wondering why charcuterie dry-cured meat gets all the attention.

It’s because it’s not just about following a recipe there are a few other factors that come into play to actually produce the real deal – which makes a craft.

However, the rewards from crafting your own charcuterie are epic.

You apply a curing mixture to the meat, which is the ‘curing’ aspect of it. This goes to work using the salt to inhibit the meat.

Depending on the size of the meat been dry-cured, it can take one to two weeks for pancetta pork belly or up to 1 to 2 months for a whole prosciutto pork leg. Sometimes it’s washed with wine, sometimes not depending on the dry-cured meats being made.

Then the drying out phase begins.

The meat is hung, this is to minimize contact with surfaces to avoid the chances of contamination.

In places like Parma where they make Parma Ham, it is close to a body of water and therefore has higher humidity (moisture in the air), so the traditional cured meat storage areas have massive legs dangling down throughout, like this (to be Parma Ham, it has to come from Parma and be drying for a minimum of 1 year- the taste is so phenomenal if you haven’t tried it).

I have been using for many years now, my own DIY homemade dry curing chamber which is able to control humidity and temperature with simple off and on thermostats, humidifiers & dehumidifiers. This is the same process, that is done on a large commercial scale also in some places.

The meat is hung, sometimes tied, sometimes sprayed with some flavored good cultures (that’s why your salami has that white powdery stuff on the outside – it’s penicillin -another useful aspect).

And then it comes down to patience and time.

It still boggles my mind that Spanish Iberian Ham (Jamon) or prosciutto Parma Ham are dried and aged up to four years, which you pay a decent amount of money for as well.

Since the meat has a reasonable amount of saltiness in it, the key is wafer-thin slices.

Which can be cut by hand, but a precision deli meat slicer is the proper way. Have a look at some of these delis in Italy I have visited, they sometimes have 6 to 12 delis slices probably each worth $5k to $8k US each, incredible. But the dry-cured meats are sliced to order as part of the culture across Italy and Sicily.

The French it’s more about the classic fare (rillettes, terrines & pates) or salamis. The Italian and Spanish classic charcuterie has many different types of whole muscle dry-cured meats (loin, belly, etc). And minced meat that has also been dry-cured otherwise known as salami.

There are seven parts of the pig that represent classic Italian Salumi some of these you may be familiar with, Salumi also includes the midst meat salami dry-cured meats and charcuterie.

The whole muscle chunks of dry-cured charcuterie all follow that same kind of process above.

Check out my page on Salami vs Salumi for more detail on salumi muscle groups.

Parma Ham, prosciutto, Iberian Ham (Jamon)– the interesting thing is there all the whole pork legs that have been charcuterie dry cured.

Another one of the most popular cuts is the might pancetta pork belly, with its various different types of spices used. Some people think it’s bacon but it’s not, only a few regions across Italy cold smoke the pancetta.

Bacon generally has salt sugar and his cold smoked over several days (but there is so many variations of bacon as well).

There is one Salumi that’s not actually pork and the classic Italian interpretation is called braesola which is the eye of round from the cow, very solid meat, hardly any fat and flavors of cinnamon and nutmeg are subtly applied, a few other spices meld together to make this delectable treat.

When it comes to charcuterie dry-cured meat, salami creates a wonderful mouth feel – slight acidity from the fermentation, salt and seasoning, and the fat. It’s often got a good percentage of pork fat in it typically.

Many salamis are also cold-smoked giving that extra level of complexity and flavor. The process is a little bit different, compared to the Salumi -whole muscle charcuterie dry-cured.

The Process of Salami – How is it Made?

It’s kind of similar to Salumi but a little bit different as well.

The main thing is that salami has a fermentation stage at a warmer temperature to lower the acidity pH level which does a couple of things.

Now not all salami is done is way, but I am focused on that classic dry-cured charcuterie (I have hot smoked salami as well).

The pH level will affect the tangy flavor of the salami (this is adjusted through different cultures). But it also helps make the minced meat environment inside the sausage casing a more inhospitable (hard to survive) environment for bacteria that you don’t want in the salami.

The hardest part of salami making, in my opinion, is making sure that there is no or minimal amounts of air/oxygen inside the casing since this can lead to spoilage.

But the same thing with the dry cured sausage salami happens, where you want to dry out, to a point where it is preserved and safe to eat. Which is around the 35 to 40% weight loss from when the starting weight (the golden rule for dry-cured meat). So you start with 1-kilogram salami once it has been stuffed into a casing. Then it ends up being about 650 grams or less (metric system makes this example easier).

Cold smoking is also used for flavoring and drying out the meat, basically cold smoking is just drying using smoke to also help. Since deciduous smoking wood (or any wood that burned maybe) carries anti-bacterial and anti-fungal properties (another method of helping preservation), this cold smoking has also been around for thousands of years, the European community is rather fond of it, and you can find numerous variation across the countries.

Pepperoni but it’s really just the development from the classic Italian the Dry Cured Picante Salami I think.

Genoa Salami with its white and black peppercorns, garlic, and wine – an absolute classic.

There are literally thousands of variations across the world now, with so many various meats as well.

Don’t try CatFish Salami in Hungary – you have been warned!