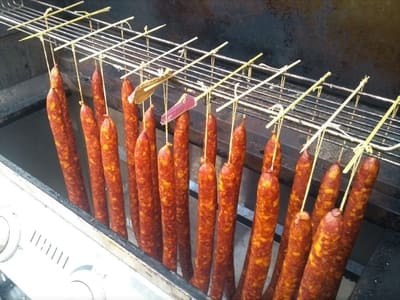 Whether salami has carbohydrates in it or not isn’t a straightforward yes or no answer. This comes from someone who makes salami at home but has also an understanding of the commercial salami and how it is produced.

Some of the commercial & home salami textbooks I’ve read have highlighted additional ingredients that have certain effects and properties on the meat. Yes, some of these are carbohydrates.

To be honest, the only one that I would consider adding is dextrose or an alternative form of sugar (which is, of course, a carbohydrate). It would be to balance out other more intense flavors.

But for genuine dry cured salami you wouldn’t use any additional carbohydrates. But for most of the salamis produced in mass production, it’s a different story.

So I’ll give you quick answer and then if you’re interested I’ll dive into some of the other ingredients and unknowns surrounding the infamous salami.

But I always like to make it clear, its a generalizations!

Salamis produced world-wide vary dramatically in quality, and the methods of production vary greatly, too.

Does Salami Have Carbohydrates in it?

With commercial salami, of course, it’s all about maximizing profit. Many of the additives they used are for water retention and to increase the standard temperature shelflife. Yes you pay for that water instead of salami.

Additives such as soy products, soy proteins, gums, extenders, whey protein, flour, or starches – some of which are carbs.

Whether the salami has been properly fermented, which is part of a traditional salami process can tell whether they may have more carbs.

To give you some idea of contrast, some commercially produced salami takes one day to make using heat, additives and some other modern food production techniques.

Compared to dry-cured salami, which involves curing, fermentation often, and a drying stage. It can take 1 to 4 months to make.

What is Salami Made Of?

If your talking about dry cured quality it should be made of :

Where do the Carbohydrates in Salami Come From?

What Most Commerical Salami (Supermarket quality) is made of:

The Above ingredients plus often these below:

Many of these ingredients play a certain role when making the product more durable, and providing better outcomes for the business.

I’m not going to get into the detail of the ethics, and what I think about adding these ingredients.

But I’ll leave you with one question, are you okay with paying for water inside your meat products. Especially with things like commercial deli ham.

Fibers are another way of making that salami faster in a factory!

Fibers are a recent addition to salami to accelerate the speed of drying as well as reducing the Aw (water activity) within a salami product, and powdered cellulose was the first type of fiber applied because it is one of the most abundant organic materials on earth.

So why do they use these products inside the salami.

It’s kind of like having tiny little pockets of moisture, so you have a semi-firm hard piece of meat with built-in moisture, who wouldn’t want that!

Make More Money from the Product

So, of course, a big reason for having carbohydrates inside the salami is your avoiding the cost of more expensive meat or fat.

As a Fat Substitute

If you want reduced fat salami, my advise is just don’t eat it. The fat is part of the product.

There are certain effects of using some of these carbohydrate-based products and it, of course, increases how long the product can remain on the shelf in the same state, therefore it comes back to profitability drive.

If you’re talking about pure proteins then quality salami does seem to be keto-friendly. If you want to read a bit more on the topic I wrote a post to answer the question from the community.

I wrote a post on cured meat and keto friendliness here.