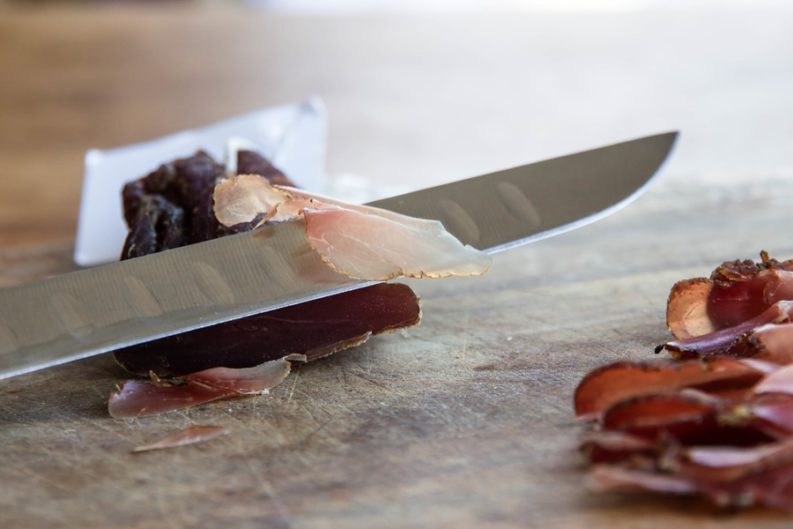 Charcuterie is expense, well the stuff you buy is. It’s now got a wide definition covering anything from cured meats to rillettes and bacon.

For over 25 years I have been making and buying charcuterie, dry-cured meats and salumi from all over the world – and I’m still reluctant at times to ‘invest the money.

I’ve been lucky enough to have traveled to many countries and spent months and months in Italy seeing how all the Italian charcuterie is done.

So why should you invest in charcuterie?

Sometimes it could be a bit overpriced why the charcuterie is very expensive, and sometimes it’s justified through my eyes.

I will try and cover the factors that I see that increase the cost, overheads or expenses that make quality charcuterie a higher price and more expensive.

But first, if your in a hurry a quick answer.

Why is Charcuterie so Expensive to Buy?

Quality Charcuterie is expensive due to the increased welfare of animals, better diets and non-intensive farming practices. The time it takes to make quality charcuterie is months or years rather than days or weeks.

Factors Why Charcuterie is More Expensive

When we’re talking months and years we generally are talking about traditional dry-cured meats which are made all over Europe such as prosciutto or culatello.

By forcing salt into the meat, you can cure the meat faster and speed up the process -some factory production techniques use this. Many hams produces use this to quicken the process.

As opposed to traditional dry-cured prosciutto ham for instance, which takes a month or two for the manual master hand salt rubber (honored trade in Italy) to do the work and a minimum of nine months drying time.

As you can imaging, this can’t sell for one year and sometimes up to five years, which carries expenses during this drying time.

The traditional art of cold smoking which falls under the modern interpretation of charcuterie, takes many hours if not weeks to produce.

2-5 year old professional dry cured meat at intense and complex – it’s a master class – and thousands of years of history have created this epic food.

I got a tour in a butcher once, and it had a $200,000 cold-smoking machine. Normally cold-smoked meat would take 20 to 30 hours, this machine could do it in 30 minutes. Using a pressurized system of some sort, not going to get technical. But it’s another cheeky little shortcut.

There is another older technique for making dry-cured or brined bacon a lot faster in the factory. I’ve read about how they, in the past, used to pump the meat full of nitrates, way more than what is considered a safe level, this means the curing is fast and they can get it onto the shelves a lot faster. Another sneaky shortcut that you’ll find in many supermarket foods, especially when there is a lack of passion or interest in what they are producing to sell.

If you look at the story or the tracing back of how the food came to sit on your plate or be in front of you. It can give you an idea of how an animal is being treated, or how healthy the soil was that crew your carrot.

Salami also gets a lot of shortcut treatments and a bit of a commodity. The start of this video below is an interesting little taste test blind comparison between salami explaining cheap vs expensive.

These are just some categorizations of how animals are farmed. Nearly all the chickens that are farmed for eggs and meat in the world are still battery chickens, which means they are squeezed together, they really have no room to move, often developing a lot of health conditions and of course, they have a crappy life.

These methods are used due to the demand for eggs in the world. Now specifically I’m talking about artisan small production charcuterie, it takes a lot longer to produce the meat and hopefully, the animal has a much more pleasant life – that costs more money.

Now there is some legislation around the world when it comes to free-range, but it’s debatable from what I’ve seen and read some aspects of it are just ticking boxes. Like you can let an animal out for an hour or two a day and stick it back in lock-up, which categorizes it has free-range (free to range for 1-2 hours actually). Free-range also means the animals need a minimum measurement of space in their shelter area.

It, of course, depends on which country we are talking about, but then every country’s majority of the bulk food especially meat that’s produced is a bit commoditized.

So good charcuterie is kind of like the opposite to a commodity and hopefully cherished and appreciated a bit. It’s not a transaction kind of or such a simple formula, it also just can’t be done on massive scales consistently across the food chain.

I tried to elaborate on another post all about the popularity of charcuterie, I think it all relates to the whole slow food movement as well. Since cured charcuterie is like the slowest food around.

It completely polarizes the idea of fast food which is all about nearly forgetting where the food comes from in a way. Focusing on the convenience and the speed of it (apart from the quality food trucks movement that’s around).

Charcuterie is based on old-world ideas, a lot of the dry-cured things like dry-cured authentic pancetta and prosciutto is about preserving as much as flavor which was a necessity before modern refrigeration was invented.

There is sometimes a high level of complexity with dry curing meats, and some mystery around it as well. Some aspects of penicillin natural good bacteria on the surface of the meat to protect it. Or changing the acidity pH so that you get a safer salami, are aspects that are not involved with straight fresh food that’s cooked.

And I think people are looking for a challenge, and charcuterie specially makes it at home can be incredibly rewarding and fun.

Putting Charcuterie (or Food) Inside Your Body

I think people get detached sometimes at the current speed of life. I try and remember you are actually ingesting and putting these things inside your body (in the reference to thoughtless meaningless fast food).

Let me repeat that inside your body.

Enought preaching back to some ideas about cost factors of charcuterie

In a previous life, I was an account manager and sometimes when on-site I would go to large food factories, like canneries. It was literally quite shocking to see the cannery side of things and the aspects of food production from the inside.

Whether it’s a restaurant or buying food in the market – was there passio around the production of this food?

This generally sorts out whether someone is proud of what they produced.

Or was the food produced purely for profit and volume.

The video above is a good indication of getting a comparison between cheap or expensive dry-cured or charcuterie meats.

There is another one that he did on bacon which is quite interesting as well.

Is Making Your Own Charcuterie Cheaper?

Here at my blog, of course, it’s all about what you can make at home, here is a link to producing charcuterie in your normal regular fridge in detail.

Here also is a link to some beginner ideas if you wanted to get into making her own charcuterie as well.