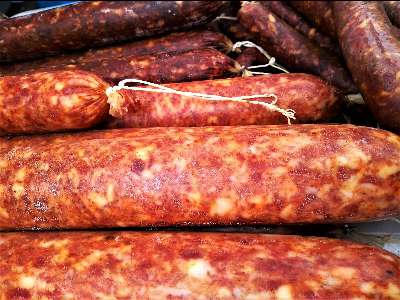 Of the many things to put on a charcuterie board, salami is one, but does it fall in the category of charcuterie?

Charcuterie boards have been steadily rising in popularity from dining around a friend’s kitchen island with a glass of wine in hand to residing on global restaurant menus. With popularity increases the curiosity about which meats are considered to be charcuterie?

Is salami charcuterie? Salami is a dry-cured meat that in the modern content falls under the charcuterie category. It falls under Italian Salumi as a cured meat. The French classification of salami includes Charcuterie as well. Modern Charcuterie boards consist of prepared meats (cured and cooked) most often including the popular Salami.

It might seem a little bit confusing at first, but the classification under the umbrella of Salumi instead of Charcuterie does not change much in the common presence of a delicious Salami on a Charcuterie board or platter.

It is among the most common meats found on this type of dining selection. To learn more about Salami’s place in the world of prepared meats, continue reading.

Traditional French Charcuterie refers specifically to the rillettes, terrines, salamis and dry cured meats that used every portion of the animal as possible to cook, seal, and store for later consumption.

This type of consumption practice was created in an attempt to use every component- including the liver, offal, and intestines- to get the most bang for your buck with the pig (or animal of choice).

This practice also helped to prolong the meats into consumable options that would be available weeks to months later with minimal preparation needed.

Interestingly, this practice has been threaded with the modern Charcuterie practice of using the majority of the animal in its preparation.

Traditional French Charcuterie (pronounced “Shar-cout-tar-ree”) would also include pates- cooked meats that have been ground up and spread over the top of other food components in your dish. The idea with this type of food is to use ground up components of every portion of the animal so that the food does not go to waste.

It would be served similarly to modern Charcuterie with cheeses, bread, or vegetable options (though these were not necessary for categorization as Charcuterie).

Modern Charcuterie, on the other hand, more often refers to dry cured meats and nearly anything that is considered antipasti on a charcuterie board.

A Charcuterie board or platter can include cured (not cooked) meats like Salami (among others). However, the idea with the prepared meats on modern Charcuterie boards is to still consume those that use the entirety of the animal.

Therefore, you will not generally find steak, chicken, or another form of meat on a Charcuterie board. Instead, you will find prepared meats that have been cured or cooked that are beautifully spread out and ready for consumption.

Additionally, as keeping up with tradition, you will find these meats paired with traditional cheeses as well as a modern flair of fruits (like grapes), vegetables, crackers, and just about anything else that might pair well. Modern Charcuterie is a bit more inclusive and open to considering a wide array of meats (like Salami) and other pairings when served.

Though the two vary in spelling by just one simple letter, Salami and Salumi are not interchangeable terms. While this can seem a bit confusing to those who are not well versed in cured meats, it is really quite simple to understand. You must simply take a closer look.

Salami is a dry-cured meat consisting of different flavors and ground-up meat packaged in a casing and able to be eaten without having to be cooked (mortadella/baloni are considered emulsified salami).

Salumi, on the other hand, refers to meats, in general, that are cured. As there are many types of meat that fall into this category, Salami ranks in with the rest- falling under the “umbrella” of Salumi.

While Charcuterie refers to meats that have been prepared to be served, Salumi refers to cured meats that are prepared for the same thing. Taking a closer look, Salami would be one specific meat that falls neatly in the Salumi category.

Additionally, you can even find different flavors of Salami that can be categorized under the Salumi realm. For instance, Salami Picante, or hot salami, is a very popular option. Salami Picante is known for its peppery hotness that is infused and also adds to the orange tint to this meat. Interestingly, because of the emphasis on the heat of the peppers, this meat is known as Pepperoni in the United States and a few other locations.

So, if you are having trouble remembering the relation of Salami to Salumi, then simply observe the spelling of each.

Salumi contains “um” whereas Salami contains “am”. Salumi is the umbrella (referring to cured meats) under which Salami falls in the category of prepared meats in general.

Popular Salami for a Charcuterie Board

If you are looking to create a Charcuterie board to impress your friends, then you are sure to want to choose a nice selection of high-quality meats, cheeses, fruits, crackers, nuts, or other snacks. But, in keeping with what a more traditional Charcuterie board is, you really need to focus on the meats and cheeses.

With that said, you will want to begin with the ever-popular salami- but you should recognize that there are many different flavor options when it comes to Salami depending on the region in which it stems.

A few popular salami for a charcuterie board include Genoa, many pork variations of salami, or possibly a beef salami.

You may find a local salami infused with flavors like garlic or other herbs depending on the cultural infusion available in your area.

You can also use other cured or cooked meats for your charcuterie board if you are looking to wow your guests. A few popular meat selections for a well-crafted Charcuterie board include prosciutto, jamón Ibérico, jamón Serrano, speck, mortadella, capicola, chorizo, or almost any pate.

Of course, there are plenty of other items that you can add to your Charcuterie board to infuse more flavor. These can include cheeses that pair well with the meats and something to garnish or add to the meat (like a cracker that it can be eaten on, olives that it can be garnished with, etc.).

If you are unsure of what types of meat to offer, just select a few that vary in flavor components so that your guests can pick their favorite type. Pair the Salami on your Charcuterie board with a savory cheese, a delicate grape, and a full-bodied glass of wine, and you and your guests are well on your way to an incredibly delightful evening.